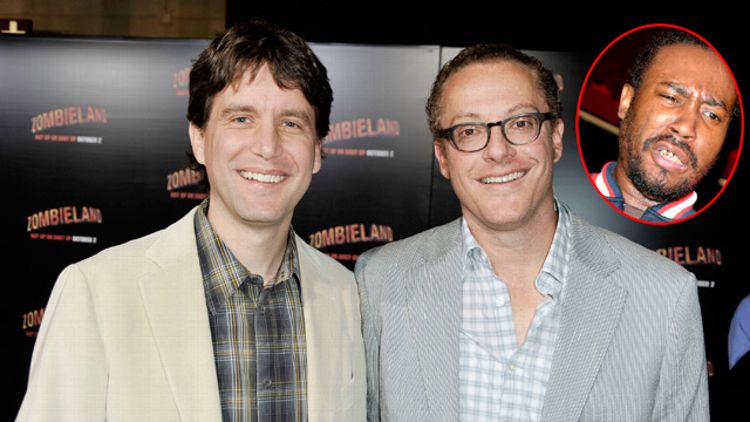 These days, Paul Wernick and Rhett Reese write movies and TV shows. Their latest project, G.I. Joe: Retaliation, hits theaters today; their next one, a TV adaptation of their rad 2009 movie Zombieland, is coming soon via Amazon’s new production slate. But before they were well-connected Hollywood bigwigs, they were just a couple of guys trying to make TV with Ol’ Dirty Bastard. The year was 2004, the network was Spike, and the show was called Stuck on Dirty. It was a reality series, with one lucky fool selected to compete: The longer he stayed by genius crackpot ODB’s side, the more money he would win. They shot for a week during that year’s sweltering summer and had, as Wernick and Reese describe below, pure gold. When ODB died a few months later, from an accidental drug overdose, that ended any chance the show would air. In lieu of ever actually seeing the footage, we called up Paul and Rhett to hear all about surviving a week in the last days of Ol’ Dirty Bastard.

So how the hell did Stuck on Dirty happen?

Wernick: We had this idea. It was called Handcuffed to Mike Tyson. And we pitched it to Mike Tyson and Mike loved it. We were in business with Spike at the time.

Reese: It was a reality show where you had to spend a week literally handcuffed to Mike Tyson.

Wernick: And Spike bought it in the room with Mike. Of course. If Mike Tyson is sitting in the room, the good thing is to say yes. And ultimately he got cold feet. So they said, “Who can we get who’s less controversial than Mike Tyson?” And somehow they came up with Ol’ Dirty Bastard. Which, I’m not sure he’s any less controversial than Mike? But we were on a plane to Brooklyn about two weeks later, and we spent the craziest week of our lives — literally 24 hours a day with Ol’ Dirty Bastard and some poor guy from Queens. A pasty white guy from Queens.

What was the setup?

Click here for all of our interviews with fascinating people from the worlds of sports and pop culture.
Wernick: They have these electronic tethers, they use it a lot with kids stuff now, that’ll beep if you get more than 10 feet apart from one another. And so they both wore these GPS kind of devices and had to stay within ten feet, and every time they broke the chain, the alarm went off. So that was the idea — as the chains broke, Bob lost money, and they ended up closer together. But they essentially spent 24 hours, seven days a week stuck together. They slept in the same room, there was a camera recording them all the time. And it was a culture shock. Both for the guy who was handcuffed to him and for us.

How’d you find the guy?

Wernick: We cast him. We put out a casting call. Looking for the whitest guy in Queens.

Reese: His name was Bob and he was from an Italian American family. He was a wonderful guy and he just rolled with the punches.

Did Bob manage to stick with ODB the whole time?

Reese: He actually did.

Reese: He got into some situations with Ol’ Dirty Bastard: We had a 250-pound stripper doing a lap dance on this guy’s lap …

Wernick: In Ol’ Dirty Bastard’s house. It was like a brownstone or whatever, in Brooklyn. It was about three in the morning, it was about 200 degrees in this place — it was summertime, and all the production lights were on — and this woman was grinding. This woman was completely full-on naked, grinding, 250 pounds of her body on this poor guy. Anyway, it was wild. We had fugitives coming in and out of our show. 60 Second Assassin …

Reese: It was wild. It was a wild week.

Wernick: And unfortunately, for him more than us, he passed away soon thereafter, and we didn’t get a chance to air the show. But we shot three or four episodes.

Was there any chance, after ODB died, that the show would air?

Reese: We wanted it to but I think they thought discretion was the better part of valor, and they decided not to. But we laughed straight for a week. Crazy stuff would happen. When Paul says there was a fugitive who showed up, it was really true. Like, we came in in the morning and Bob and ODB are lying there in their beds, and lying there on the floor next to them is a guy named Panther who was fleeing the police, and wanted a ride to Philadelphia from Brooklyn. And we actually put him in one of our cars and sent him there! I think we might have aided and abetted. Anyway, stuff like that would happen as a routine matter. That was a Tuesday for ODB.

And it wasn’t like ODB was playing it up for the cameras?

Wernick: He barely even knew the cameras were on.

Did you do any other setups?

Wernick: I think Bob took him golfing. Ol’ Dirty Bastard was on some public course in New York, just hacking it up, man.

Reese: I think he five-putted from like four feet. I’ve never seen anyone putt worse.

Did Bob go on to further reality show fame?

Wernick: I don’t think so. I think this was his one shining moment.

Reese: He was bummed he never got on TV, but he won a fair amount of money.

Just from reading about him, it seems like ODB really kind of had several different sides to him …

Reese: Absolutely. We found some of that. He’s a very gentle soul: He loved women, just loved women. He was struggling at the time, physically and mentally. He’d done a lot of drugs, he definitely had some physical maladies.

Wernick: He wasn’t living that high on the hog at the time.

Reese: But if you got him in the right arena, if you got him with some cute girls, he would really, really light up. It was tragic: He died not too long after. And our show was meant to play largely for comedy audiences, so it never made air.

Wernick: He’s a complex dude. He was very protective of his family and of his mom. There is one scene where he and his mom are on the telephone, and they’re just going at it. He’s upset at his mom, and Bob is tethered to this guy, and he’s sitting right there, and anyway … it’s a real unique look at Ol’ Dirty Bastard that people really never got a chance to see. It’s a shame.

And the tapes are somewhere?

Reese: There is this hour and a half worth of footage that’s sitting somewhere in a vault at Spike TV.

Wernick: It’s in my closet, actually. I have it.

Wait, really? Would it ever air?

Wernick: I don’t know. I don’t know how Spike would feel about it. But it’s definitely … memorable.

In Praise of Ben Mendelsohn and the Evolution of 'That Guy'