Preacher Might Finally Get Adapted, With Help From Seth Rogen and AMC 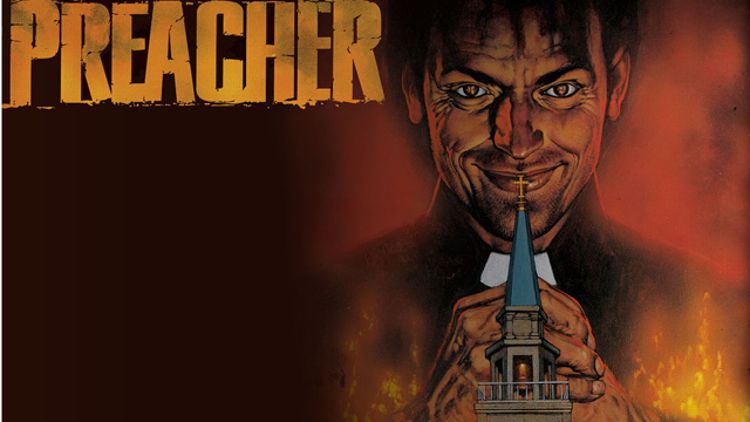 Two things happened over the weekend: Badass Digest posted an unverified report about Preacher — Garth Ennis’s graphic novel that has nothing to do with a Paul Bettany movie nor a Gerard Butler joint — receiving a pilot order at AMC. Then Seth Rogen tweeted, “Looks like about seven of years of hard work are about to pay off. I may get to bring one of my favourite stories ever to life … Arseface. John Wayne, The Saint of Killers.” Forget that Rogen wasn’t able to steer The Green Hornet out of an ugly crash, no matter how much he dug the comic, and forget that Rogen sometimes spells things with u’s. Focus instead on the fact that Preacher, which wrapped its impressive run in 2000, might finally have a real shot at a real adaptation.

In mid-October, after Breaking Bad closed its venerable doors and The Walking Dead reopened its widely attended carnival of empty-calorie wheel-spinning, Andy Greenwald wrote that “AMC in 2013 is in the very strange position of having everyone compliment it on its delicious dinner party when, back in the kitchen, the cupboard is shockingly bare.” When the Mad Men jar empties, zombies are all that will be left in there. Shows like Low Winter Sun and Hell on Wheels could quite likely continue chugging along (the latter was renewed last week), inspiring more derivative, inessential series in the process. And, per Greenwald, “there’s certainly no shame in staggering forever forward, attempting to pull fresh meat off picked-over skeletons. I’m just not sure there’s much future in it, either.” Enter Preacher.

This genre-hopping saga — and it’s definitively a saga, not a situation stretched across years, à la Dead — could instantly walk alongside the criminality and moral ambiguity of Breaking Bad, the all-Americanness of Mad Men, and the godawful gruesomeness of The Walking Dead. Without even delving into the superlatively intriguing supporting cast (see the aforementioned Arseface), you’ve got three compelling leads: Jesse Custer, a boozing Texan ex-preacher who gets endowed with cosmic powers; his killer-for-hire lady friend Tulip O’Hare; and Cassidy, an Irish vampire with sunglasses. The narrative is ready-made for TV, with a bevy of strong, individual story arcs featuring short-lived but unforgettable villains and situations playing out across America and Europe. The nine trade paperbacks could easily translate to seven seasons of fresh television.

There’s no way Preacher could enter the TV landscape without a major ruckus. Controversy and assorted sordidness would be guarantees — the comic blurs the lines between necrophilia and bestiality, explores S&M in all its forms, has angels mate with demons, and depicts the last living descendant of Christ as … well, I’ll save that one. As Badass Digest puts it, “It isn’t so much that Preacher is hyper-violent — although it can be — but rather that it tackles hot-button religious issues with all the subtlety and grace of a loud wet fart in church.” The basic gist: God has bailed on his Heavenly throne and headed to Earth to hang, incognito, until the Apocalypse. Custer’s quest: track down The Man Who Used to Live Upstairs and make him answer for his actions. I’m imagining an AMC exec trying out “Blasphemy Matters Here” as the network’s new tagline.

You don’t need any of the details to take the news with a grain of salt, though. Preacher has been in development hell for 15 years, since Garth Ennis penned an adaptation and Kevin Smith lobbied for Harvey Weinstein to lend a hand. TVLine notes that HBO axed an adaptation in 2008. “The new head of HBO felt it was just too dark and too violent and too controversial. Which, of course, is kind of the point! It was a very faithful adaptation of the first few books, nearly word for word,” Daredevil screenwriter Mark Steven Johnson said at the time. Badass Digest doesn’t have specific names, but it hears “big and impressive” creators are in the mix this time around.

We’re still in the “sources say” stages and probably will be for some time; Rogen’s tweets lend the project’s existence some credibility if not certainty. But if you want someone who’ll push that don’t-get-your-hopes-up stuff, don’t turn to the guy (uh, me) who recently did Halloween as the Irish vampire while two of his friends went as Jesse and Tulip.

Kenny Powers Hall of Fame: Our Most Special Eastbound & Down Memories