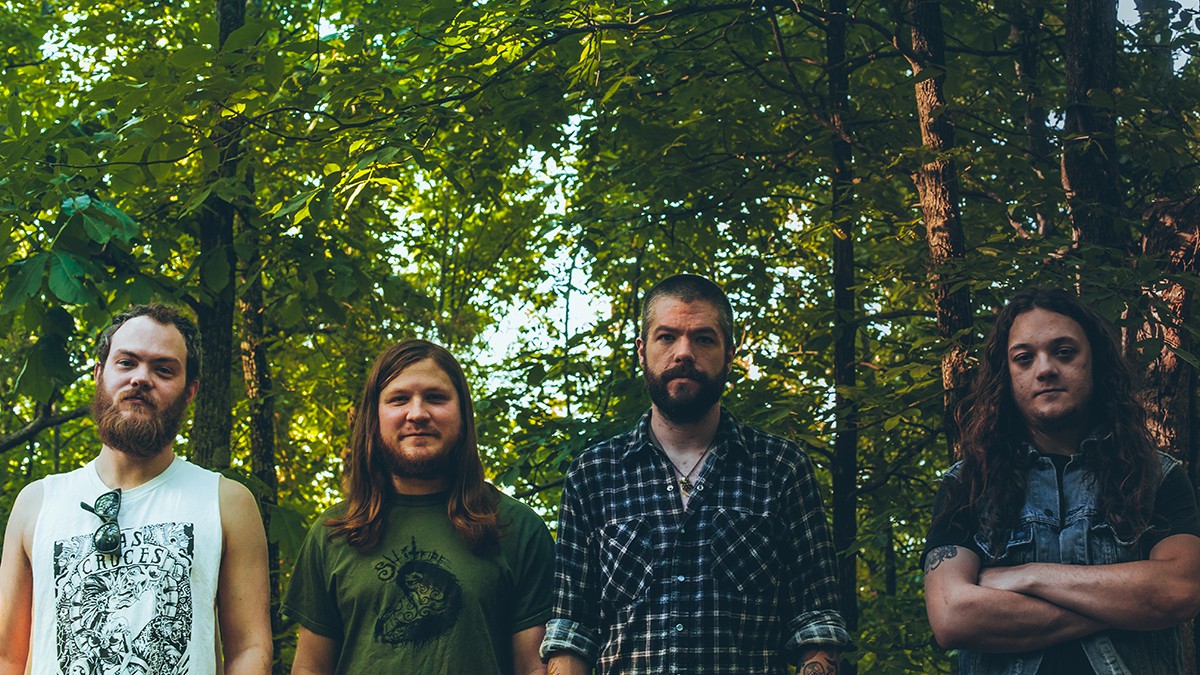 When I phoned Joseph D. Rowland of Arkansas doom metal titans Pallbearer last month, there were certain topics I expected to broach. I anticipated talking about Black Sabbath, whose mythic, down-tuned rumble Pallbearer pushes to the brink, creating a meditative, ambient sprawl that oozes like ominous lava trails. (Pallbearer actually thanked Black Sabbath in the liner notes of its 2012 debut, Sorrow and Extinction.) I also assumed we’d discuss Intensely Emotional Matters of the Heart, as this is the only topic Pallbearer is interested in writing songs about. Sorrow and Extinction is concerned with death and grieving. Pallbearer’s beguiling new LP, Foundations of Burden, is about “looking at the past and letting go of regret and knowing what’s worth holding on to,” Rowland later explained. But he declined to elaborate further on the meaning of Pallbearer’s songs, which are written by Rowland and the band’s strikingly emotive singer-guitarist, Brett Campbell.

“Anything that I have a hand in writing for Pallbearer, it always stems from life experiences that I have,” Rowland, 29, said, “and that’s not really something that I’d like to talk about.”

So instead, we talked about No Jacket Required. This I did not expect.

“I don’t see how anybody can deny that that’s a great pop album. Even if they don’t like it, I don’t see how anybody can say that it’s bad. It’s, like, a really, really good pop album, regardless of personal taste, you know?” Rowland said. “I’m a huge fan of Phil Collins. I like a lot of those albums that are pop albums by prog-rock musicians. So many people seem to hate on that stuff now but I think it’s fantastic.”

Luckily, “pop albums by prog-rock musicians” is a topic I’m very much interested in. (Non-nerds will want to skip the next two paragraphs.) I love maligned Rush albums like Grace Under Pressure and Power Windows, Genesis’s early ’80s period, and, yes, No Jacket Required. But Rowland goes deeper than me. When we talked about Yes, I expected him to stump for 1983’s 90125, the record that spawned the MTV hit “Owner of a Lonely Heart.” Instead, he enthused about 1987’s Big Generator, the much-reviled apotheosis of the band’s “slick yuppie music” era.

“I think I might be one of the few people who like that record,” he confessed, laughing. “It’s, like, really self-indulgent for a pop album. They had literally all the resources in the world and the best recording technology and all the money they ever wanted to make a pop album, and they made it as over the top as they could. I kind of got to give them props for that.”

Perhaps this tangent shouldn’t have taken me by surprise. While Foundations of Burden is hardly a pop record — most of the songs run past the 10-minute mark — it doesn’t shy away from stunning vocal melodies or soaring guitar accents. Like Deafheaven’s Sunbather, Foundations fits the broad definition of a metal album while also aiming to transcend the constrictions of the genre. It’s a heavy, even punishing record, but it’s also downright beautiful in places, with an imposing wall of chugging riffs and brutishly slow rhythms that induces deep personal reflection. It’s a powerfully immersive listening experience: Foundations might be slow going for those inclined to ingest music in bite-size portions. To get to the bottom of Foundations, you have to be willing to let it envelop your senses for the next hour, and take you somewhere.

An Indiana native, Rowland moved to Little Rock (where Pallbearer is based) for college, eventually meeting and forming a band with Campbell a decade ago. He describes seeing Heaven & Hell — the version of Black Sabbath fronted by Ronnie James Dio that toured in the late ’00s until Dio’s death in 2010 — as a transformative experience. “Mob Rules is my favorite metal album,” he said. “Seeing that stuff live, seeing them be able to pull that off at that level, was really inspiring to me. And that was just a little bit before Pallbearer became a thing, even just on the bedroom scale.”

Sorrow and Extinction was a smash hit among underground metal fans and critics, frequently appearing on year-end best-of lists. But Rowland has a somewhat ambivalent relationship with modern metal music. “There’s not much that I really find compelling about it,” he said. “I don’t really listen to a lot of, like, extreme metal or anything really.”

Instead, Rowland tends to stick with his prog and classic rock favorites. “I’m a big fan of Boston, Asia, stuff like that,” he said. Rowland also dips into indie music every now and then, which is appropriate given the enthusiastic boosts Pallbearer has gotten from sites like Pitchfork. “I really like that newest record by the Knife that came out last year,” he said.

While Foundations is superficially similar to its predecessor in terms of its measured pace and elongated track running times, Rowland said the band worked on making its dirges more dynamic — less doom and more rock. The record is a success on that count; while the BPM are still parceled out judiciously, Foundations feels like a swifter listen. Songs like “Worlds Apart” and “Watcher in the Dark” might unfold in a stately fashion, but they stomp with greater force and purpose. There are also subtle integrations of psychedelic and electronic music, as evidenced by the relatively brief (at almost three and half minutes) instrumental “Ashes.” For Rowland, “Ashes” is another Black Sabbath callback, akin to the band’s impressionistic, stylistic left turns like “Laguna Sunrise” and “Planet Caravan.”

Foundations has already been proclaimed as a potential game changer for doom, just as Sunbather was for black metal. But Rowland doesn’t seem particularly interested in pushing doom forward, at least not at the expense of allowing Pallbearer to do whatever it wants. Looking forward, he said Pallbearer isn’t necessarily committed to continue writing dark-hued mini-epics that hit the pavement like narcotized bison.

“A pop-length song would be totally fine with me,” he said. “It seems like a lot of people had negative things to say about Mastodon doing that, but I think it works for them. Maybe not every song is as awesome as ‘March of the Fire Ants’ or something, but they’re still writing quality music.”

But even if Pallbearer takes a less heavy turn musically, it won’t even ease up on the heaviness of the lyrics. “Coming back around to the Mastodon thing, I feel like as they’ve gotten more accessible, their lyrics have gotten a lot less serious. That’s one thing that I don’t see us ever really doing. I don’t think we’ll ever have a ‘Curl of the Burl’ kind of song. This is my outlet and everyone else in the band’s outlet to have this specific emotional element. It’ll branch out into different emotions, but I don’t think it’ll ever get to the point where it’s not serious.”

Basically, Pallbearer is committed to not losing its dragon, which in Rowland’s case is a little loved prog-pop castoff with too-slick production.

After 'Barton Fink 2': A Proposed Nine-Year Franchise Plan for the Coenverse