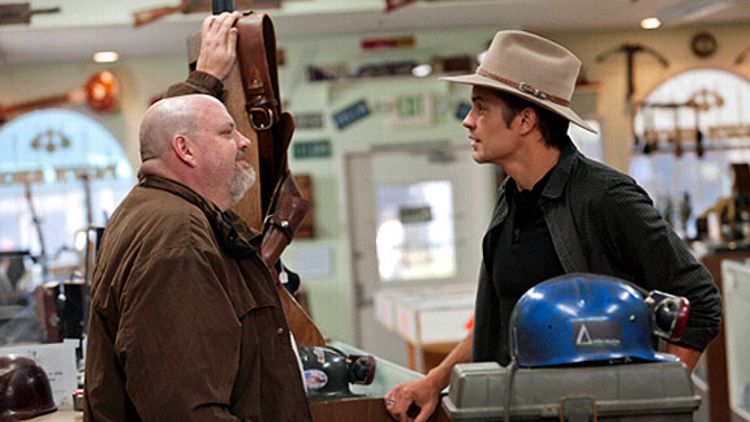 Among other things, Justified is about how one man, a lawman, comes to love and cherish the place he protects and serves. In Season 1, Raylan Givens was a reluctantly returning prodigal son, romancing women he should stay away from, gunning down anyone who gave him the least bit of lip, and taking out his alienation on those around him.

In Season 2, Raylan confronted his past, his roots, doing battle with both Mags Bennett — the nefarious matriarch who seemed hell-bent on destroying Harlan even while she tried to preserve its broken way of life — and, to an extent, his own father, whose criminal leanings seemingly propelled Raylan into a life of law enforcement.

With Season 3 now several episodes deep, Raylan seems to have found something that once seemed impossible: a home. OK, well, he hasn’t found one yet — he and Winona are still jawing about his and hers sinks and whether to call it a “crapper” or a “commode” (eat your heart out, Downton Abbey). But they are looking, generally in what Raylan describes to Glen Fogel, the pawn shop owner and Oxy-addict-tormenter, in “the Greater Lexington area of kiss my ass.”

That’s the focus of the show right now: the Greater Lexington area — from the city, to the wretched hive of scum and villainy that is neighboring Frankfurt Frankfort (apologies, Kentucky!), to the hills, hollers, and criminal hideouts of Harlan. We’re dipping into the pawn shops, BBQ joints, dive bars, and vacant McMansions, and the show has never felt so wide-screen, so large in setting. And to paraphrase Will Oldham (while thinking of the Johnny Cash version of the song), we see a darkness.

Mags Bennett’s death has created a vacuum and it’s sucking a lot of lawyers criminals, guns, and money into Kentucky. In “Harlan Roulette” we get a good sense of all the heavies and most of their (cruel) intentions.

You’ve got the out-of-towner Robert Quarles and Dixie Mafia steward Wynn Duffy’s new scheme to make Harlan the Oxy hub of the South; Boyd Crowder (now reunited with his cousin Johnny, emboldened by his Lady MacAva, and flanked by Arlo and Devil) laying out his 10-point plan to run this holler (which also involves moving pills); and finally (I think) there’s the somewhat mysterious Ellstin Limehouse, a man who guards his territory fiercely, makes a mean spice rub and occasionally enjoys chemically burning the back-of-hand flesh of insubordinate employees.

All these folks get a fair amount of screen time in “Harlan Roulette.” Their paths cross a bit and, in the case of Arlo Givens and Limehouse, a deeper history is alluded to (one imagines that this traces back to Arlo’s time with Bo Crowder’s crew). So dense were the various gathering storm clouds that the more self-contained plot of the episode was almost an afterthought.

Pruitt Taylor Vince, who played Mose Manuel on Deadwood (making him the umpteenth actor to appear on both Olyphant-starring series), plays Fogel, the aforementioned fence/Oxy dealer working for the Dixie Mafia. When Raylan gets too close to Fogel’s TVs-for-pills scheme, he sends out Wade Messer (played by James LeGros, in his inimitable, real-life “The Dude” way) to put an end to his snooping.

Events don’t go quite according to plan, and when Fogle shows up with one of his pill-head sidemen in tow (Wally Beckett, played by Eric Ladin from The Killing), one of the bloodier and sloppier plea bargains in television history ends with two dead bodies, neither of whom Raylan shot. For once.

MVP: Boyd Crowder. “Harlan Roulette” was a backdoor Boyd episode. We’ve seen Boyd be a white power hatemonger, a preacher of the Lord’s word, a criminal, convict, and working stiff. Sometimes you wondered if Boyd, actor Walton Goggins or, indeed, the show’s writing staff, could keep it all straight. But in Boyd’s conversation with Devil toward the end of the episode, about his white power and bible-thumping past, you could see the character (and the actor) wrestling and finally embracing everything that he’s done: “What if I told you I was the man who recruited you in that church. But then I also told you I was the man who got shot, who found God. Who betrayed his father. And I was a man who killed men and had gotten a whole bunch of men killed. See, Devil, I can’t discard my past any more than I can these tattoos.”

Hat Content: Steady. Raylan keeps it on for most of the episode and you can see his step lighten and his mood lift up when he trades barbs with Trooper Tom Bergen. The two have an exchange about sick wives, fried chicken for breakfast, and the irony of Raylan not being a fan of chasing (as in running) after fugitives, despite it being a main part of his job. That’s hat banter, man. Keep an eye out for a new hat, though: Limestone’s floppy-brimmed farmer’s piece could give the stiff-brimmed Stetson a run for its money.

Raylan’s Love Interest Threat Level: Nonexistent. Very little Winona this week and absolutely no danger of her getting stabbed with an ice pick. She even lets Raylan skip out on house hunting to go fugitive hunting. She’s a keeper.

State of Boyd Crowder’s Soul: Self-aware, but spiraling downward. If you were wondering whether Boyd is still on the fence about reclaiming his father’s role as Harlan’s crime lord, stop wondering and refer to the monologue Goggins delivers in which he declares he wants to become Harlan’s crime lord.

F-Yeah Ava Crowder: Gotta love the little crinkle Joelle Carter does with her nose when Boyd announces the new crime syndicate will not be running prostitutes.

Villain of the Week: Wade Messer. Wade is barely a villain, but I thought James LeGros’ “I’m Waiting for the Man” shuffle deserved some kind of special shout-out. Also worthy of special citation this week is Devil, played by the awesome Kevin Rankin (who did such good work as Jason Street’s wheelchair-bound buddy in Friday Night Lights). Occasionally reduced to hillbilly set-dressing, you could see Devil wrestling with his own blind faith in Boyd all through the episode. The scene toward the end of the episode, in Johnny Crowder’s reclaimed bar, sees Rankin go toe-to-toe with Goggins, downplaying his character’s usual dimness and showing a vulnerable side to Boyd.