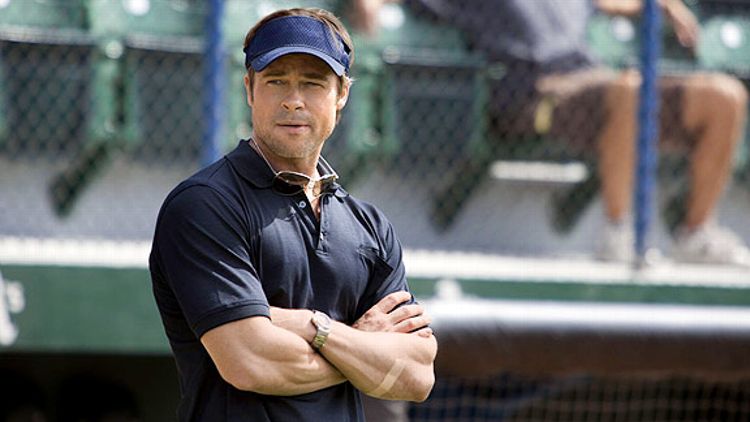 If you’ve read any Baseball People’s reactions to Moneyball, Bennett “The Good Capote One” Miller’s film adaptation of the Michael Lewis bestseller Moneybeane: One Handsome Rageoholic’s Quest to Buy a Playoff Ticket With a Fistful of Loose Change, you now are probably aware that the movie takes certain liberties with the facts of the real-life story of the 2002 Oakland A’s. For example: Jeremy Giambi was not signed to help fill the gaping statistical hole left by the departure of his MVP-caliber brother Jason, he was already on the team; the A’s were comprised of more than just three or four oddball, superficially flawed players; and so on. Though I am loath to point them out because an auteur should have near-total freedom to manipulate reality in the name of compelling storytelling, here are some other inconsistencies you may miss if you’re not a baseball fanatic watching with an eagle eye.

• Manager Art Howe, though languishing on a no-confidence one-year contract and bitterly resentful of GM Billy Beane’s unrelenting insistence on playing comically inept first baseman Scott Hatteberg, never publicly flossed his crotch with the lineup card before setting it aflame in the umpire’s hand, an act likely to get him ejected from a real game.

• The 2002 Oakland A’s won just 20 consecutive games; the movie’s much more dramatic 100-game streak was added at the behest of a producer whose wife just “likes big round three-digit numbers.”

• After budget-conscious owner Steve Schott began charging $1 apiece for formerly free clubhouse sodas, the real-life David Justice never set up a cardboard cut-out of a naked Schott covered in sticky dollar bills, peeling them off one by one to pay for each satisfying, post-victory Coke.

• The Oakland front office, as run by mathematical wiz Paul DePodesta, was not obsessed with a statistic called “Base on Beanes” (or, more informally, “Beanies”) as fictional amalgam Peter Brand was, nor did DePodesta pump his fist and exclaim “Moneyball!” after each A’s win.

• At no time during the 2002 season did scrappy bat-boy “Tugs McGillicuddy” deliver a game-winning grand slam while pinch-hitting for Eric Chavez, after the All-Star third baseman faked a hamstring pull to help his leukemia-afflicted young friend live out his Major League dream.

• In a glaring omission, at no point is current San Franciso Giant nine-figure bullpen-sweep Barry Zito shown dry-surfing in the A’s locker room, nor does he serenade his teammates with the self-penned psych-up ballad “Let’s Go Win This One, Dudes, Why Not? Winning’s So Rad”; he did both of these things before every Athletics game as he helped lead the team to a 103-victory season. In fact, he’s not depicted in the movie at all because of a scheduling conflict with actor Dax Shepard.

• Following his playoff-ruining victimization in Derek Jeter’s now-immortal “flip play” in October of 2001, in which a failure to slide into home left him vulnerable to the Yankee captain’s improbable shovel pass, Jeremy Giambi developed a post-traumatic stress disorder that compelled him to hurl himself head-first at every base regardless of situation, severely impeding his baserunning ability in the 2002 season. In the interest of narrative expediency (mental illness is a tricky thing to tackle in an uplifting sports flick), he’s merely a Vegas-loving troublemaker.

• Submarining reliever Chad Bradford, in the film woefully undervalued because of a genetic mutation that “curses” him with two extra pairs of non-functional, but conveniently distracting arms, is actually just a humble, devout Christian with a funny delivery.

• Pathological game-ignorer Beane did not learn of the team’s heartbreaking Divisional Series playoff loss to the Minnesota Twins by opening a box, messengered over to the Athletics weight room by competing GM Terry Ryan, containing the severed head of front-office executive J.P. Ricciardi.

Mark Lisanti is deputy editor of Yahoo’s entertainment blogs. His 73 mph fastball is still undervalued by baseball GMs. Follow him on twitter @marklisanti.