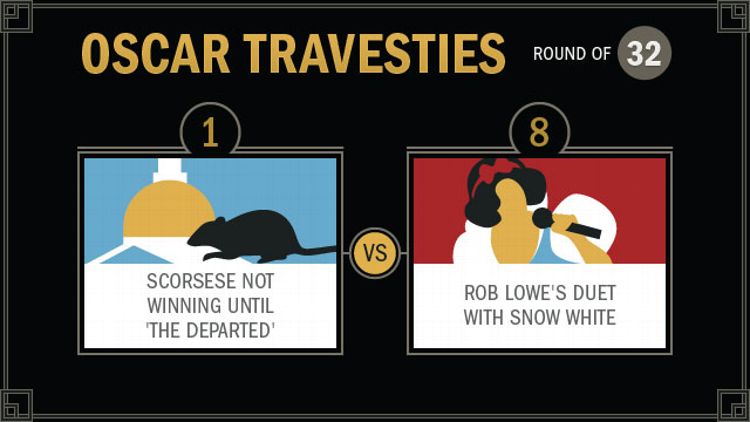 In the epic, contentious, slanderous 40-person e-mail chain that kickstarted this endeavor a few weeks back, I slavishly recalled more than 20 perceived Oscar Travesties™ occurring before 1972, our cutoff year in this arbitrary contest. (Here’s one: Paul Lukas in Watch on the Rhine beat Humphrey Bogart in Casablanca for Best Actor in 1942. Think about that.) I never thought we would vote on these ancient mistakes, no matter how deeply I believe Dr. Strangelove deserves that shine over My Fair Lady. I was merely trying to point out that the Oscars, before we were watching them, before we were born, hell, before our parents were born, have been blowing it. And though the voting procedures have changed over the years (revisit Mark Harris’s essential Oscarmetrics coverage from 2012 for more details on the evolving voting body), the fact has remained: Getting it wrong is the only way Oscar can be right. 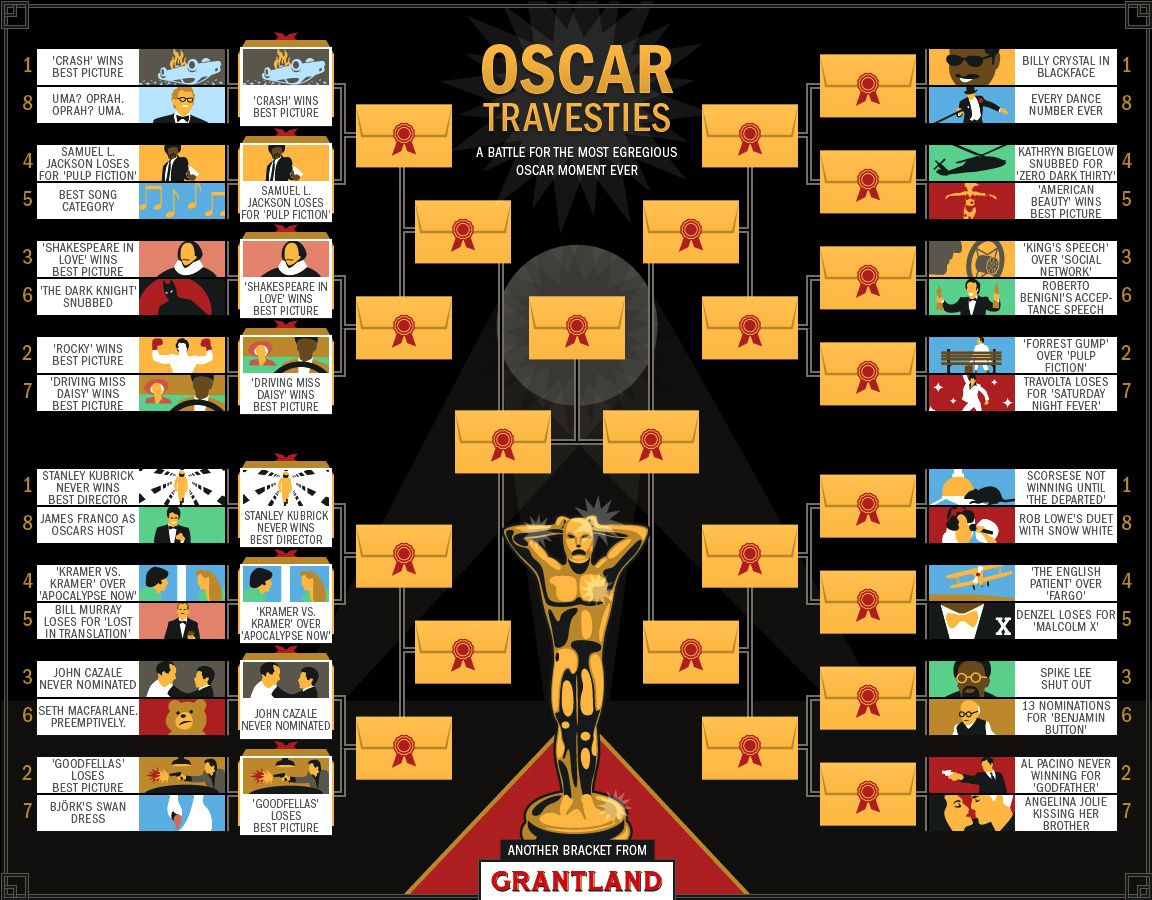 [Click for a larger version.]
Which is to say, the members of the Academy are a bunch of trolls. Maybe the finest this nation has seen, and they’ve been at it since well before we knew what that was. Because when rewarding the arts, there are no parameters, no boundaries; there’s nothing to calculate. It’s about feelings, and one thing we know about feelings is that they are the thing that make all humans individual snowflakes floating through the atmosphere of this melting rock. I say this as a person that has enjoyed exploiting the emotional inefficiencies of the universe. Everything we expect to be an unquestionable truth is up for debate. Especially the worth of a movie called Driving Miss Daisy.

Take this year, for example. The needle on Oscar’s spinning wheel of death seems to be settling on Argo, which is a very strange turn of events in a year with so many other great movies. How do things like this happen? How did it take Martin Scorsese six nominations, 20 feature films, and 39 years (!) since his debut, Who’s That Knocking at My Door?, before he won a gold-plated statue that said “Best Director”? That’s one of two no. 1 seeds in today’s matchups, Day 2 of our round of 32. Here’s what we learned from yesterday’s results: It’s not the abstract ideas on the perimeter that enrage us. It isn’t the inanity of the Best Song category or James Franco doing his best Daniel Desario on hosting night. It’s the outrage over Shakespeare in Love sniping Saving Private Ryan by dint of Harvey Weinstein’s campaign skullduggery and the Oscars’ everlasting thirst for a curveball. Yesterday, another Scorsese-related travesty, the defeat of Goodfellas at the paws of Dances with Costners, handily triumphed over Björk’s bird dress. We know that is blasphemous because no one watches Dances, ever, and Goodfellas has entered a canonical cable TV zone reserved for only the most rewatchable movies ever made. The list goes on and on, with several more today, from Pulp Fiction‘s trampling under Forrest Gump’s running sneakers to Spike Lee’s zero-for-life Oscar track record. Which is the worst? Well none are worse than Bogie getting Bogarted by that Austro-Hungarian Lukas. But I suspect you’ll find something to get riled about.