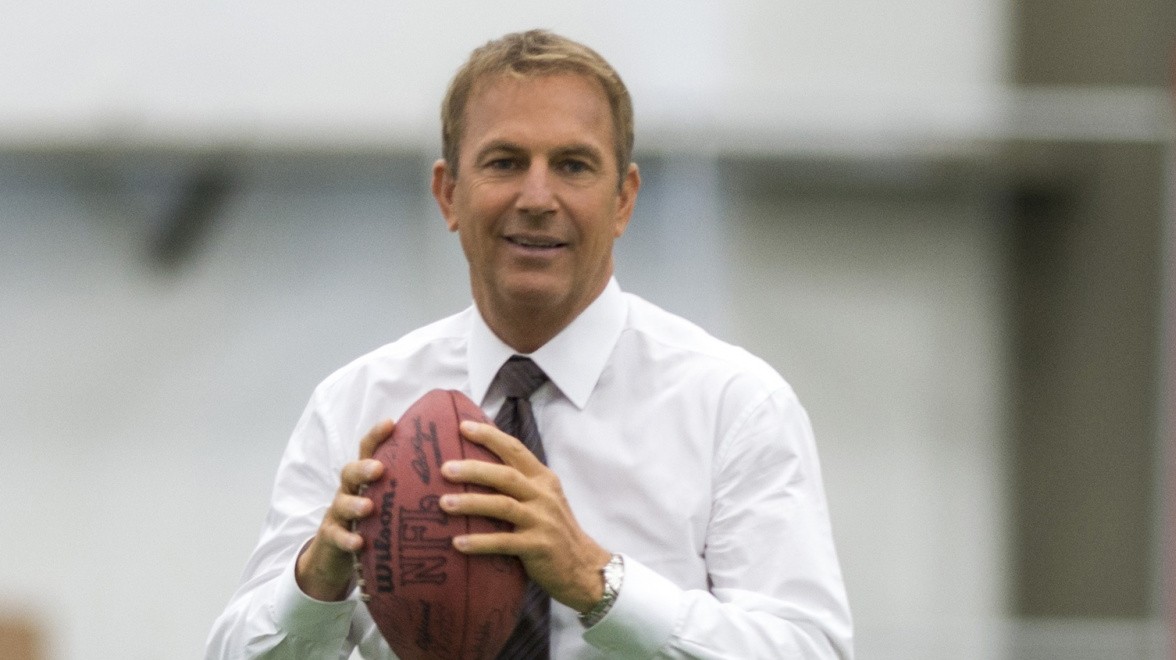 So much of Draft Day takes place on the phone, the filmmakers had to come up with a way to make the calls exciting. So they split the screen down the middle. Sometimes the line separating the speakers moves a little to the left or to the right, and one person on the call — are you sitting down? — walks past the other character’s frame. Sometimes the entire frame slides across the screen! I mean, can you stand it? The other person on the phone doesn’t know that, say, Kevin Costner, is crossing a room or walking through a corridor, but we do. What access!

The first time this happens, it’s a nice kinetic touch. But it keeps happening, and every time it does, you’re meant to notice whose shoulder is violating the barrier — who is, quite literally, thinking outside his allotted box. Mostly, it’s Costner playing the made-up general manager of the Cleveland Browns, Sonny Weaver Jr. Early on, a countdown clock pops up onscreen, giving Sonny about 12 hours to angle for the first pick in the draft. The world thinks the Browns need a hot, new Heisman Trophy–winning quarterback (Josh Pence). But Sonny isn’t so sure. We’ve seen the phone calls. He’s unconventional. Fun fact: He even fired his beloved coach-slash-father from the team. The father, who was ill, has, of course, recently died. It’s that kind of movie.

The writers have given every scene at the Browns office a kind of sitcom nuttiness, which is understandable once you know the director is Ivan Reitman. (Yes, that Ivan Reitman.) The office scenes come complete with a new nerdy intern (Griffin Newman) and the unannounced arrival of Sonny’s mother (Ellen Burstyn) and ex-wife (Rosanna Arquette). They show up not long after the team’s quarterback (Tom Welling) has trashed Sonny’s office and the coach (Denis Leary) has set flame to a guidebook and dropped it on Sonny’s desk. In saunters Ali, who proceeds to extinguish the fire in a way that says, “I also do this figuratively.”

Through it all, Sonny is juggling calls to and from the team’s flashy owner (Frank Langella, wonderful in shades and good tailoring), prospective draftees curiously desperate to play for him, and the coaches and managers of other teams. He does this while backing Ali into a closet for some very short-lived real talk (knock, knock: It’s the intern!) and trying to assuage the stresses of Vontae Mack (Chadwick Boseman), a linebacker with a neck tattoo, bullet-chamber watch, and two adorable nephews to raise. The rest of the cast includes Sean “Puff Daddy” Combs, Chi McBride, Kevin Dunn, Terry Crews, Wallace Langham, Sam Elliott, and Jonah from Veep. So on top of everything else, this is the kind of movie that isn’t cast so much as clogged.

But Costner, as usual, makes most of this look easy. His hair is slightly mussed and only vaguely gray, and his tanned skin is a seemingly natural, freckled leather. And he spends the movie in a snug dress shirt that doesn’t hide a paunch and gray slacks that gather near his crotch. (Of course he’s going commando.) It’s a sign of Costner’s enduring stardom that he can skate through a movie this hyperactive and dull, yet still have you like him. As always, he needs better material, but I liked that he doesn’t play it entirely cool. He lets enough of the stress overtake him that you reach for a Tums.

Draft Day is the least offensive film one could make about the National Football League. It’s about the business of building a team, and the movie has a decently dramatized climax that manages to show what a chess match the draft itself can be. It just takes a lot of silliness to get there. The movie wants to show several prongs of the NFL power cord, but it’s not really interested in the lives of these players. It would say it cares about the Vontae Macks of the league, and Boseman, last seen as Jackie Robinson in 42, goes for a curious sort of macho emotionalism. But it’s taken mostly with the corporate power structure and what the NFL can do for guys like Mack and the son of Crews’s retired veteran.

The movie also likes the idea of what football can do for a place like Cleveland, which is depicted as a pitiful, postindustrial city on NFL spiritual life support. That’s a loaded characterization that, without a more serious treatment, is condescending. Of course, every person and entity in Draft Day is desperate, everyone except the pregnant lawyer who handles the money. That might have to do with Garner’s rigor as an actor — her flavorless pluck works better here than it did in Dallas Buyers Club. But I could feel her wondering how she’d been trapped as a romantic device. Garner started her career setting the traps. Now look. She’s staring into a bathroom mirror with her hand on her stomach while Costner stands in the men’s room splashing his face with water. She can’t even leave the split-screen framing device.

In any case, you watch a story about a sports team’s inner workings, and you just know someone involved said, “Let’s do Moneyball, but for the NFL.” Moneyball, of course, had very good source material that it managed to dumb down without turning stupid. Draft Day is just a store-brand, Toasted Oats–versus-Cheerios approximation: Runnyball.

At some point late in his documentary interrogation of former Secretary of Defense Donald Rumsfeld, Errol Morris asks the question I’d been thinking the entire time up till then: “Why did you agree to do this?” It isn’t so much that Morris has been particularly hard on Rumsfeld. If anything, his film — The Unknown Known — succumbs to Rumsfeld, but not unreasonably and not completely. Rumsfeld happens to be an utterly captivating public figure. He was, of course, one of the architects of the Iraq War, and as such, has captured Morris’s interest — though rarely, here, his opprobrium.

But surely Rumsfeld and the people around him understand that Morris has mounted searing examinations of the detainee abuses at Abu Ghraib (Standard Operating Procedure) and of former Secretary of Defense Robert S. McNamara (The Fog of War: Eleven Lessons From the Life of Robert S. McNamara), an architect of the nightmare in Vietnam. Had no one seen any of Morris’s moralistic editorials in the New York Times? Surely, Rumsfeld understood that even if the filmmaker wasn’t going to gather a journalistic firing squad, Rumsfeld, at the very least, would be expected to account — if not atone — for the misinformation that led to war and for the mistakes made in its waging. What could he possibly hope to gain from subjecting himself to the Morris treatment?

For the better part of 103 minutes, Rumsfeld sits before Morris’s cameras, looking straight into the one facing him, and gives what amounts to a grand self-explication, not simply of his role in Iraq, but of the professional and historical events that seemed to inform his state of mind as secretary of defense under both Gerald Ford (he was the youngest ever) and George W. Bush. He served in the Nixon White House, and during the Reagan administration was brought in as a special Middle East envoy. With Morris prompting him from somewhere offscreen, Rumsfeld walks back through many of the significant events of his assorted tenures. Throughout, he’s charismatic, reflective, and jolly, but also serious and committed to defending himself. When Rumsfeld claims never to have seen the torture memos that authorized so-called “enhanced detainee interrogation,” Morris exclaims in disbelief, and Rumsfeld complains about the news reports’ misunderstanding of what constitutes torture.

The Unknown Known lacks the impeccable assembly of The Fog of War, which, formally speaking, brought Morris as close to perfection as he’s ever likely to come. This time he’s settled on moving pie charts and dictionary definitions that fill a dark screen like constellations. There are many cutaways to oceanic vistas, a roiling snow globe, and, once or twice, to words spilling into a black hole. Good design has always been crucial to the Morris experience. This time its symbolism feels bluntly symbolic.

Getting McNamara meant something to him, and you could feel Morris not wanting to ruin the strategy of reeling his subject in. But the shock of that movie was just how candid and in need of self-exculpation McNamara was. He seized upon Morris’s filmmaking apparatus. He transformed it into Sunday school. It’s as if Rumsfeld saw the McNamara film as a kind of game he’d like to play. McNamara gave a lot away. Rumsfeld offers very little that’s new.

What emerges is a fascinating portrait of a bygone approach to power, marked by a seemingly contradictory mix of transparency and obfuscation. Rumsfeld embodies that discrepancy. It’s the key to his endless allure. Indeed, the high points of the film tend to involve clips from his press conferences during the Iraq War. There really was nothing like them. The journalists in attendance pelted him with skepticism, and he parried in exasperation. His responses were koans that answered no questions. Maybe they were prevarications. Maybe he believed them. But he became famous for his pseudo-philosophical stonewalling. Often it tipped into condescension, sometimes into anger. He suffered the press and seemed to hate having to explain, even loosely, what transpired at the Pentagon. Which makes his participation here, reading aloud his old writings (in a way that redefines “torture memo”), ironic.

The assumption, of course, is that if Rumsfeld agreed to sit with Morris, there must be a smoking gun, that Rumsfeld must have a confession, concession, or correction. This is a subtler, less sensational movie than that. He’s like an old movie star sitting for a profile.

The best we get is a repetition of his outrageous, shrugging admission that “stuff happens.” I don’t know that the other major players in and around the Iraq War — Dick Cheney, George W. Bush, Colin Powell, Condoleezza Rice, John Yoo — could have withstood Morris. His opening question to Rumsfeld involves the word “obsession,” which Rumsfeld rejects. We then get a partial answer: “I’m cool,” he says. “I’m measured.” He might have come to clarify the thinking behind the war. But it’s in his nature to spread more fog.

There’s a type of animated movie in which the plot doesn’t matter, where you honestly don’t know what you’re watching, but you sit there passively mesmerized for 90 minutes. Rio 2 is like that. It’s just like 2011’s Rio, except the domesticated Minnesota macaw (voiced by Jesse Eisenberg) who wound up in Brazil is now to be redomesticated as a husband and father of three bratty birds. There’s some business involving the wife (Anne Hathaway) bringing the family back to her Amazonian jungle roots.

Conveniently, there’s a deforestation plot that’s perfect for an ecology-minded climax (hey! Mister! Leave those trees alone!), a very funny talent-audition montage that almost makes the jive of Nico and Pedro (Jamie Foxx and Will.i.am as “city birds”) worth putting up with, and just enough shiny production numbers for Jemaine Clement (cockatoo), Kristin Chenoweth (pink dart frog), and Bruno Mars (slickster macaw) to go to town on. It’s perfectly split between generic and new, and doesn’t do anything with 3-D but make you wonder about all the packaging for the glasses. Yet that matters not. Rio 2 has a childish, delicious-looking beauty. It’s like watching a box of Froot Loops explode just beyond the tip of your nose. Bring milk.

'Game of Thrones' Showrunners David Benioff and D.B. Weiss Have a Movie Lined Up