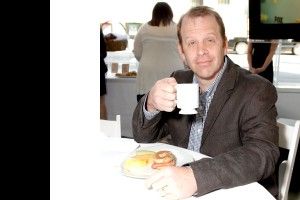 First it was Regional Manager Steve Carell, then it was CEO James Spader — and now the real boss on The Office, showrunner Paul Lieberstein, is heading elsewhere. Lieberstein, who also turns in a bravura performance as the downtrodden Toby, isn’t going far. He’ll still be around to help out whomever the ninth season’s showrunner will be, but his main focus is going to be on The Farm, the Office spinoff that will find Dwight Schrute leaving the paper business behind and focusing full-time on his family farm. (Bears, beets, Battlestar Galactica indeed.) If The Farm works out, then Lieberstein will become its showrunner. And so the search is on for his replacement.

But, as The Hollywood Reporter points out, that’s not all NBC’s old warhorse has to overcome. Mindy Kaling has a Fox pilot, and she’d have to bounce right out of Scranton if it’s picked up. Head writer Daniel Chun just recently inked a deal with ABC Studios and is “considering his future with the series.” And the contracts of Ed Helms, John Krasinski, and Jenna Fischer are all due for a re-up for a ninth season, although all three primary players are reportedly in talks to return. (Smart fellow, that Krasinski, not just rushing right out to try to get those rom-com bucks). It’s not exactly surprising that after nearly nine seasons — an epic run for a sitcom — the show is starting to fall apart. (For example: The only thing I’ve ever done for nine straight years is not kill anyone with my car.) So, in these near-end times, let’s hope that all our old Office pals end up where they want to be. And let’s hope that, when that end does come, The Office figures out how to go out with dignity and class. And let’s hope The Office hires one hell of a Lieberstein replacement for one hell of an end run. Can anyone check if David Simon has enough Treme downtime?

Filed Under: NBC, The office

Brad Finds a New Jennifer ... and Other Horror Stories From This Week's Tabloids

Five Questions on American Idol: An Unpleasant Evening With Billy Joel and the Top 10