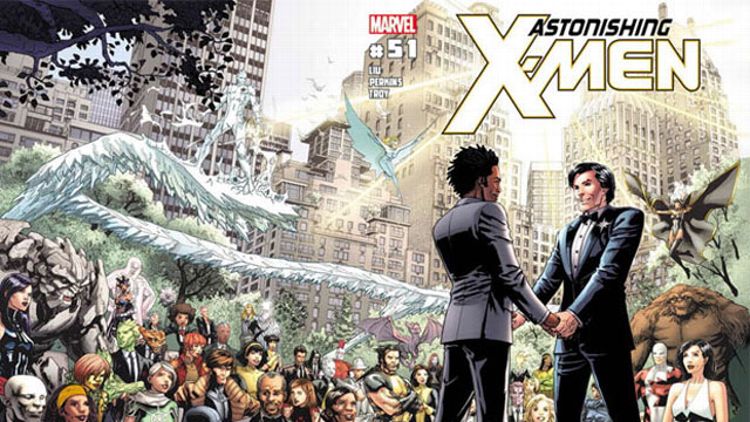 Over the weekend, from the dais at a comic book convention in London, DC Comics co-publisher Dan DiDio revealed that as part of an ongoing reboot of its entire line, DC plans to change the sexual orientation of a preexisting character. Then, yesterday, the other biggest comic book company on earth, Marvel Comics, announced — on The View, no less! — that their first openly gay superhero, Northstar, would marry his boyfriend in an upcoming issue, because bigfooting the competition in the news cycle makes striking a blow for human rights that much sweeter.

Here’s why this is a big deal, aside from the fact that Marvel and DC are urging us to make a big deal about it. Until it was finally amended in 1989, the Comics Code — a set of content guidelines self-imposed by the industry in response to political pressure in the ’50s — included circa-1954 language banning both “sexual abnormalities” and “sex perversion.” (The pressure was due in part to the furor kicked up by Dr. Frederic Wertham’s book Seduction of the Innocent, which among other things perceived nefarious gay subtext in the Batman/Robin relationship, decades before the Ambiguously Gay Duo strapped on their codpieces.)

This didn’t stop mainstream superhero comics from talking about, or at least around, gay issues. Homophobia was one of the many strains of intolerance allegorically addressed in story lines about “anti-mutant hysteria” in the X-Men books of the ’80s and ’90s. These weren’t literal gay-character stories (like Star Trek, comics didn’t tell literal stories, word to Paul Kinsey) but they often dealt sensitively with themes the writers weren’t officially allowed to touch, as in the 1986 New Mutants story “We Was Only Foolin’,” about the suicide of a teenager bullied for being a mutant. Work like this made up, kind of, for less-enlightened treatments of homosexuality in comics, like the completely insane ’80s issue of Rampaging Hulk — written by Jim Shooter, who was then Marvel’s editor-in-chief — where Bruce Banner narrowly escapes a sexual assault by two effeminate thugs in a YMCA shower; he doesn’t actually Hulk up until afterward, and it’s made clear in the narration that this time, it’s revulsion that’s brought on the change, not anger.

For the most part, though, superhero comics have spent the last few decades taking the same well-intentioned, sometimes-clueless, and occasionally bold steps toward a more realistically varied depiction of human sexuality as most other forms of popular fiction. I’m not going to try to defend problematic stabs at relevance like Extraño or Machinesmith (the Android Who Walks Like a Man, and once came on to Tony Stark) or explain why anybody thought publishing a gaysploitative Western series and calling it Rawhide Kid: Slap Leather was a good idea. But over the years, Marvel and DC have gradually, gingerly introduced some LGBT characters who’ve turned out to be not-embarrassing, including a lesbian Batwoman and Daken/Dark Wolverine, Wolverine’s bisexual son (who was technically a villain, but had his own book for a while). In the current arc of Matt Fraction’s Casanova, published by Marvel’s own Icon sub-imprint, superspy Casanova Quinn falls in love (requited, and consummated via off-panel three-way) with the man whose alternate-timeline selves he’s supposed to be hunting down and killing.

Oh, and it’s worth noting that Archie — despite still being set, last time we checked, in a weird time-stalled 21st century where jalopies and malt shops remain inexplicably popular — managed to beat both Marvel and DC to the whole gay-wedding thing back in March’s Life With Archie #16, in which Kevin Keller, the first gay Archie character, marries a male doctor he met while recuperating from injuries sustained in Iraq.

In other words, it’s a process, views are evolving, and the fact that both companies are hyping gay-themed story lines in the same month isn’t as surprising as the person at Fox News in charge of pulling the trigger on the five-alarm “Could Superman Be Gay?” headline would have you believe.

It won’t be the Man of Steel, by the way — DiDio has said the newly gay character will be someone who hasn’t yet been reintroduced to the retooled DC Universe, which puts most of the company’s marquee characters out of the running, including Batman (and, probably, if you’ll forgive the cynicism, anybody who might have the potential to prop up a summer-tentpole movie aimed at 8-year-olds someday).

Anyway: Northstar! His real name is Jean-Paul Beaubier; before he became a superhero, he was a professional skier and a militant Quebecois separatist. He was introduced in the pages of Uncanny X-Men in 1979 as a member of Alpha Flight, who were basically Canada’s Avengers. Alpha Flight got their own series in 1983, written and illustrated by John Byrne, who later claimed that he’d wanted to make Northstar gay all along, but that Marvel editorial had objected. Instead, notes Wikipedia, “Northstar’s apparent lack of interest in women was implied to be due to his obsessive drive to win as a ski champion.”

He finally came out in 1992. In an Alpha Flight story about him adopting an HIV-positive baby. Which led to him having to fight a Mountie-hatted Canuck hero named Major Mapleleaf. What, aside from being named “Major Mapleleaf,” was Major Mapleleaf’s fucking problem? You will probably not be glad you asked! He hated HIV-positive babies, because he’d lost his son to AIDS, and he felt that babies with HIV got a disproportionate amount of media attention. Oh, comic books.

Also: After his orientation was revealed, Northstar was killed, repeatedly. A story in which he would have contracted the AIDS virus himself was vetoed, but the one in which he was stabbed in the guts by Wolverine and then came back as a zombie? Totally fine, apparently! Everybody who’s anybody in superhero comics has died and returned at least a couple of times, so Northstar’s many demises shouldn’t have been a big deal, but they were symptomatic of a larger problem — once gay people started showing up regularly in comics, they tended to have very bad things happen to them almost as regularly, to the point that their depiction almost became a be-careful-what-you-wish-for kind of situation. And sure, gay characters should face the same stakes as straight characters, and Joss Whedon killing off Willow’s girlfriend Tara on Buffy was good drama even if it was bad activism, but if you need proof that comics aren’t totally comfortable with this subject matter yet, please refer to this extensive list, compiled by novelist Perry Moore, of gay comic book characters and what they were eventually impaled on. It’s modeled on the self-explanatory “Women in Refrigerators” list that comics writer Gail Simone put together in 1999, and it’s no less of a bummer.

Northstar’s luck is about to change, though. In Astonishing X-Men #50, which goes on sale today, he pops the question to the guy he’s been dating — an African American non-superhero named Kyle — in Bryant Park. They’ll be hitched next month. There’s a preview image; it looks like a really nice ceremony, even though — as usual with superhero-comics wedding-crowd scenes — there’s no rhyme or reason to who’s wearing spandex and who’s just doing creative black tie. You’d think they’d make that clear on the invitation, y’know?

And not to worry, traditional-marriage fans: There will be at least one teachable moment in which an identifiably heroic character echoes your weird medieval views! According to Marvel editor-in-chief Axel Alonso, quoted by Rolling Stone:

Our money is on Captain It’s-Up-To-The-Individual-States-of-America, a character we made up for the purposes of this sentence. Or possibly Major Mapleleaf.