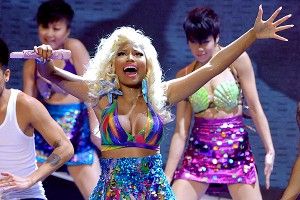 Last week I was in L.A. for a few days, which means I was doing two things that I normally don’t: I was driving a car, and I was constantly listening to pop radio while driving that car. And it’s only when you experience the perilous, delicate roller coaster that is “constantly listening to pop radio” that you begin to understand why people can get so worked up about the strict rules of the singles churned out by the Faceless Hit-Making Machine rather than enjoying their warm comforts. Because once the hits are stacked up against each other, or played over and over and over — I heard Nicki Minaj’s “Spaceships” 10 billion times — you begin to resent all the bits cribbed from other, earlier (but not that much earlier) radio successes. On “Spaceships” every segment sounds recycled, but the real bumout is that it’s Nicki Minaj doing the recycling. Yeah, she was kowtowing to radio tastes on her first album, but here you can practically hear the reference track (the song has four other credited cowriters, including RedOne of Lady Gaga fame) for the cheesy lyrics under Nicki’s phoned-in wacky voices. At one point, Nicki sings, “Ain’t paying my rent this month / I owe that,” and you can understand it as a calculated entrance point, something for the masses to latch on to. But when Kanye West did the same thing on “Can’t Tell Me Nothing” — “Wait till I get my money right” — there was enough ambiguity and residual anger from when he was broke for us to believe it. For Nicki, it just comes off as the most glaringly awkward bit of this Frankeinstein’d single. On the plus side: lots of pretty colors in this video.

Video on Demand Report: Starring Mark Wahlberg and Nazis at the Center of the Earth

Who's the Most Talented of Hollywood's Precocious, Endangered Child Geniuses?