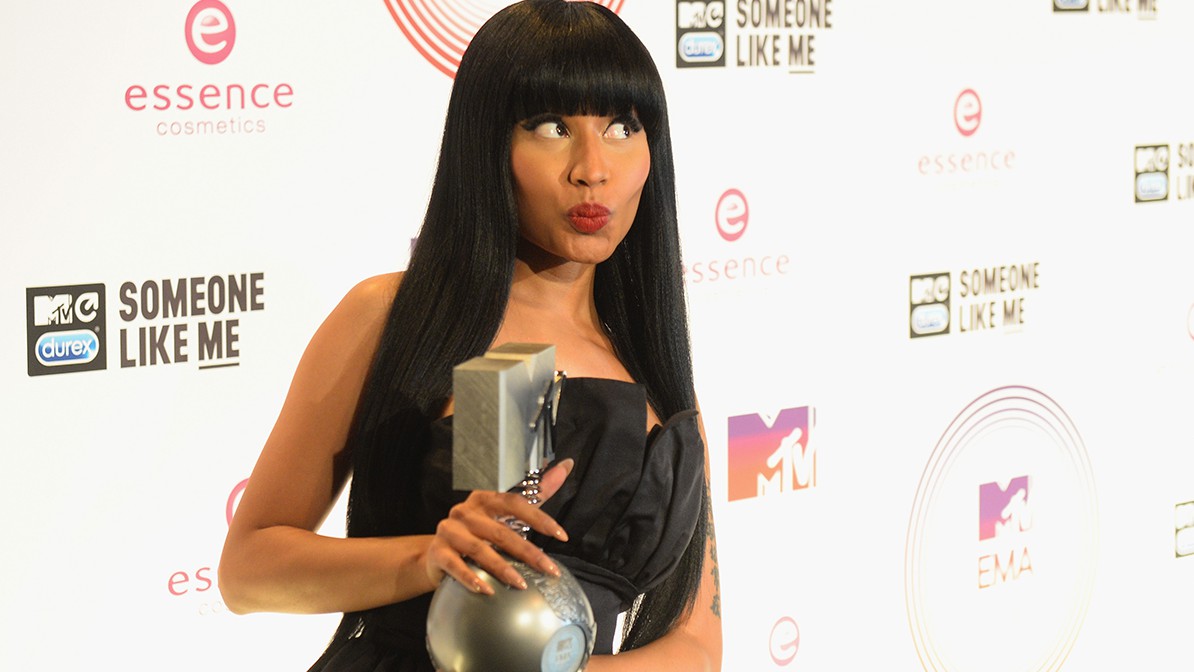 This weekend, an animated lyric video for Nicki Minaj’s new single “Only” did the improbable: it eclipsed Nicki’s lyrics themselves — and this on a song in which Nicki, Drake, and Lil Wayne talk repeatedly and at length about how, why, and when they may engage in sexual intercourse! Lyric videos are supposed to be throwaway teases, constructed to hold your attention for, at best, like, half a blog post. Which means that on a pure attention level, this is an incredibly overachieving lyric video. This is the Doogie Howser of lyric videos.

Upon further inspection, though, how this happened isn’t exactly confusing. For lots of people on the Internet, the “Only” video — which imagines Nicki as our future totalitarian overlord (with Drizzy as the Pope?!) — is a conscious evocation of Nazi imagery. Oh. OK.

Taking a look at the clip, it seems undeniable that this is at least fascist imagery: the clean lines, the massive assemblies, the Roman columns ringing back to a time of aspirational worldwide domination. But if the headlines were just “Who does Nicki think she is, Benito ‘Il Duce’ Mussolini?,” I don’t think we’d have as much of an uproar. The real problem is that reimagined Young Money logo, the one slapped on Nicki and the crew’s armbands. In its sharp, bold lines, it certainly does look something like a swastika. Minaj hasn’t responded to the mini-uproar — she’s been too busy over in Scotland multitasking at the EMAs. And even if it does get back to her eventually, it’s doubtful any of this will stick: The animation gives her all kinds of plausible deniability. The video’s director, Jeff Osborne, hasn’t really said anything, either, but has at least shown us the common courtesy of passive-aggressively retweeting people asking him what in the hell he was thinking. This is the act of a man who has just directed a lyric video embracing some micro fame with a statement as hollow as it is everlasting: “I don’t feel that I need to explain my art to you, Warren.” This is not, of course, the first time we’ve found ourselves peering into this particular pot of fascist-pop hot water. Generally, there are three modes.

1. Pure, calculated outrage shtick. This is something we saw a lot early on in Odd Future. On “Seven,” Tyler, the Creator told us “Fuck it, Odd Future some Nazis / black Nazis don’t copy / we perfect, you sloppy / hotter than Saki Takei.” On “Tron Cat,” it’s “Odd Future Wolf Gang Nazi Bar Mitzvah / with your sister at the bar playing leg and arm Twister.” On “Splatter,” it’s “Boogyin with Jesus and a bunch of Nazi hoes / in the front row at a holy Justin Bieber show.” It’s absurdist wordplay; Tyler tosses out bad words because he can, because he knows it’ll sting. But his intentions are clear. In the annals of this kind of preposterousness, it’s still Gunplay who holds the crown. From a 2012 interview with Pigeons and Planes:

The swastika tattoo is a big controversial topic amongst your fans as well as critics. Can you clear the air on that?

That this was said, presumably, with a straight face is, in my opinion, a high-water mark in performance art. Gunplay didn’t get a swastika tattoo with a plan, or even an ideology; Gunplay got a swastika tattoo because Gunplay doesn’t give a shit. Note the cover to his mixtape Inglorious Bastard. The subtitle reads, “The Prelude to Valkyrie,” which was the code name for the failed attempt by officers in Nazi high command to assassinate Hitler. 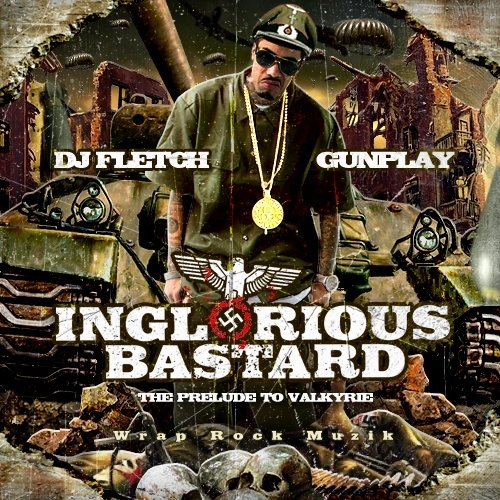 And once again, we can safely assume that we are being fucked with.

2. Direct engagement. This generally has to be hifalutin, and is thus always in danger of coming off preachy and pointless. Yes, we are aware of the dangers of overreaching right-wing governance, rock dudes. Now shut up and play the hits. Pink Floyd’s dalliances weren’t exactly that; stuff like “Waiting for the Worms” recalled the horrors of the then-recent past in an oblique way. To this day it is genuinely terrifying.

You’ve got to have an extreme right front come up and sweep everything off its feet and tidy everything up. Then you can get a new form of liberalism … the best thing that can happen is for an extreme right government to come. It’ll do something positive at least to the [sic] cause commotion in people and they’ll either accept the dictatorship or get rid of it.

Possibly it’s for shock value. Possibly it’s a dude zooted out of his mind talking a load of bollocks because it entertains him. Possibly he meant it. But if he’s interested in having the conversation, then salute to NME for talking it out. If you asked Tyler about the historical efficacy of public response to right-wing demagogues, he would most likely look at you with disdain — you have missed his point entirely — and then maybe try to pants you?

3. Aesthetic borrowing. The horrors these governments perpetrated would weigh them with a certain kind of ballast; at the same time, their own propaganda machines were working overtime to create potent images of chokehold inevitability. Leni Riefenstahl was the Nazis’ most celebrated propagandist, her films groundbreaking in their technical and visual wizardry. And even if you’re confident you’ve never seen her work, you’re probably kind of wrong. Explains DasBlaueLicht:

Shot for shot the ceremonial “great hall” medal scene that concluded the initial Star Wars film is the most widely seen and noted influence/tribute to Leni Riefenstahl. The film depicts black booted Rebel Forces, arranged in formal lines, turning on heel to face the three heroes as they walk up the great hall on the destruction of the Death Star. The composition and mood of the sequence is lifted directly from Riefenstahl’s Triumph des Willens.1 Note the use of “pillars of light” as Riefenstahl utilized at the end of Olympia and was a highly favored device of her and Albert Speer.

Lucas and Spielberg (and many other filmmakers) were in awe of Riefenstahl’s accomplishments, and weren’t particularly conflicted, at least for a time, by any moral considerations inherent to taking inspiration from them. It takes a certain kind of obsessively visually minded person to look at Nazi propaganda and only see the aesthetic value. But it’s not too hard to fathom the thought process. And that’s what happened here.

Jeff Osborne thought Nicki Minaj would look cool as an armband-clad commander of perfectly in-step fascist battalions. He’s not wrong, exactly — there’s certainly a lot of potential to imagining the ever-powerful Nicki in charge of a whole lot of people; she does look cool. (Also: Nicki would look cool doing almost anything.) But that cool is shallow, hollow, a little bit reckless, and therefore, ultimately, really quite dumb. You want outrage, go ahead, yell. You want engagement, let’s talk. But you want fleeting, contextless cool? Earn it some other way.