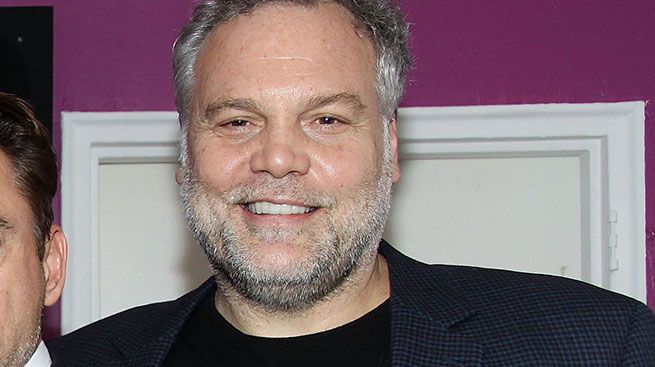 The 13-episode Daredevil series coming to Netflix next year found its lead a couple weeks ago with Boardwalk Empire‘s Charlie Cox. Now he needs some baddies to fight, and they’re starting out with the Kingpin, as played by Vincent D’Onofrio (Law & Order: Criminal Intent, Full Metal Jacket). The role was held by Michael Clarke Duncan in the 2003 Ben Affleck Daredevil. Steven S. DeKnight (Smallville, Spartacus) will be the showrunner.

Steve Buscemi is confronted with the reality of Buscemi Eyes.

FX says Tracy Morgan’s show “will be waiting for him” when he has recovered from his accident.

The Disney Channel is doing a Lion King spinoff movie, The Lion Guard, later this year. It’ll be the lead-in to a new series coming in 2015.

It sounds like if Fargo does a second season it won’t reuse the same characters.

David Fincher and Rooney Mara might be doing another movie together: Red Sparrow, a spy story.

Taylor Swift made a “Started from the Bottom” needlepoint for Ed Sheeran. So that’s happening in Taylor Swift’s life.

Kanye omitted Jay’s name during a couple of lyrics at a show? Let’s imagine a feud.

'Dumb and Dumber To' Trailer: Still the Opposite of Smart