My Comic Book Blockbuster of the Year: Saga 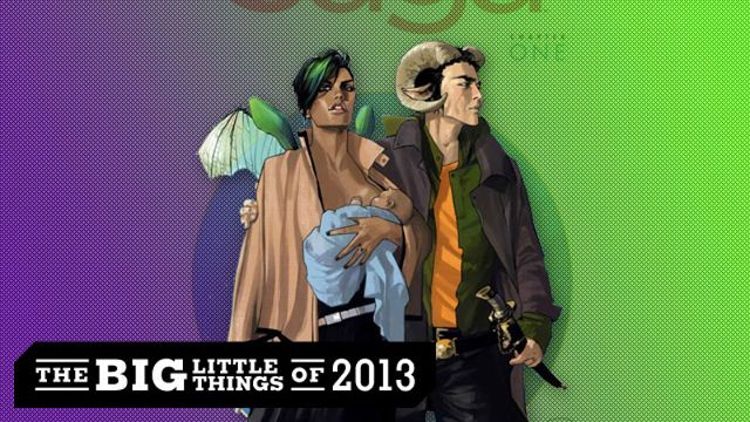 My favorite moment from my favorite comic book of 2013 was the last panel on Page 20 of Saga Issue 13, the reveal of drunken and debauched revolutionary peacenik author D. Oswald Heist — a hoary, brown-skinned cyclops creature — wearing a green bathrobe, urine-stained tighty-whities, and slippers, clutching a laser blaster and a bottle of alcohol. The dialogue balloon: “You stupid cunts here to take back my advance?” The text narration: “But no one makes a worse first impression than writers.”

Comic books, once a niche haven for nerds, weirdos, and any high school misanthrope most likely to be stuffed into his own locker, have taken over the mainstream. Marvel’s The Avengers — a film uniting the Hulk, Black Widow, Hawkeye, Captain America, Iron Man, and Thor — did a billion and a half dollars at the box office. Christopher Nolan’s Dark Knight trilogy blasted away the campy veneer of its Joel Schumacher predecessors, paved the way for a grim Man of Steel, and set us on a course for 2015’s Batfleck vs. Superman, or whatever they’re calling it. The idea that once made comics feel special, that within those pages you would see sights and meet characters that could not appear in any other medium, has been largely nullified by the steady forward march of special-effects technology. I mean, Marvel has a movie featuring a talking raccoon coming out.

But there is one comic book out there right now that captures that feeling of what makes the form unique, a story I can’t imagine happening anywhere else, in any other medium: Saga, by writer Brian K. Vaughan and artist Fiona Staples.

Saga is your basic story of two lovers, Alana and Marko, from opposite sides of a galactic war between the planet Landfall and its moon Wreath; their bi-species newborn child, Hazel; and the efforts of various parties from both sides of said galactic war to track them down, kill them, and study the child for science. It features characters such as Hazel’s ghost-teenager-without-legs nanny Izabel; the haughty, PTSD-suffering, sentient android-with-a-television-for-a-head Prince Robot IV; a depressed bounty hunter with a heart of gold, the Will, and his hairless Siamese cat, who has the power to know when you’re lying (named, quite appropriately, Lying Cat); and the alcoholic novelist Heist, whose seemingly boilerplate, Fabio-with-shirt-billowing checkout-rack pulp paperback is actually a coded call for revolutionary peace in the galaxy.

Saga is a mishmash of genres, and that shouldn’t work. The story structure is traditional: (literally) star-crossed lovers and their child, the powers that be aligned against them. Take that ages-old narrative design and set it in space. Now have the weird anthropomorphic alien creatures speak in postmillennium Earth lingo, like if you went to a planet where the inhabitants were all huge fans of HBO’s Girls. Comedic, whimsical elements are underpinned by nuanced explorations of the effects of endless war. Prince Robot IV is haunted by memories of a chemical attack that killed a medic patching him up. Alana’s first interaction with Marko’s father devolves into an argument over proportional retaliation and culpability for acts committed in a war that has raged since before she was born. The Will rescues a 6-year-old girl who was sold to the brothel planet Sextillion after her family was wrongly imprisoned by the forces from Wreath.

What makes all these disparate elements — space, fantasy, highbrow, lowbrow, magic, modernism — come together is the nature of the collaboration between Vaughan and Staples. The depth of feeling between Alana and Marko is evident in Staples’s rendering of their faces, her uncannily naturalistic depiction of human body language. The full-page reveal of Sophie, the 6-year-old slave girl, from the Will’s point of view, her shirt torn at the sleeve, is heartbreaking. I don’t know if there’s an artist working in the format today who draws clothing better than Staples — not just the realism with which she depicts folds in a cape, but also the design that went into it, how freaking cool that cape actually looks. No superhero tights and hypersexual, physically impossible poses waiting to be sent up by the Hawkeye Initiative here. It’s a rare book for which the artist and writer are equally indispensable.

At its heart, what Vaughan and Staples capture with Saga is the feeling of the first 12 months of your first serious relationship, the feeling of being so stupid in love with someone that, fuck the world, they’re all that matters. If you’ve ever felt that, read Saga and feel it again.

Let's All Say Good-bye to John Oliver and Cry