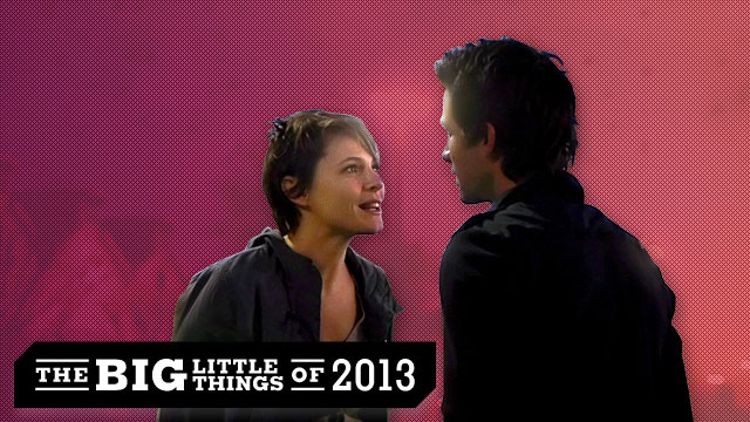 When I decided I wanted to talk about Upstream Color as my favorite moment of the year, I naturally went back to revisit it on DVD. I didn’t need to watch the whole thing, I thought, just find the scenes that I remembered being particularly noteworthy or intense. This was my first mistake, because Shane Carruth’s second feature film falls apart, Jenga-like, the minute you try to take out any one piece. Here are the film’s two leads (Carruth and Amy Seimetz) watching a flock of birds fly away on loop, here they are touching some autumn leaves thoughtfully, here they are ambling down a drain pipe and letting rocks slide down the sides just to the sound they make. I’m not going to say these moments don’t make sense in themselves, because if I’m being honest, they only make slightly more logical sense when viewed in the context of the rest of the film. It definitely looked silly, though. I questioned my own judgment in the first half of the year; I wondered where it actually ended up ranking on my year-end movie list.

Which brings me to my second mistake, which was thinking that I could talk about Upstream Color in terms of moments at all, or big things, or little things. It had been more than a moment since Carruth’s first film, the culty, brainy, famously shoestring-budgeted Primer, and there’s nothing particularly of-the-moment or distinctly 2013 about Upstream Color, except for the whole part where you realize Holy crap, did Shane Carruth really take a decade to get a second film made? Even once it arrived, it never felt like it had any discrete moment to itself, barring perhaps its buzzy, befuddling premiere at Sundance this year. It just kind of crept into a handful of theaters, then crept out, then quietly made its way to Netflix, true to the fanfare-less beats of contemporary indie movies. (Carruth is self-distributing and marketing the film.)

As it turns out, Upstream Color remains one of my favorite films of 2013, while in a way being the anti-2013 film: It’s nearly impossible to talk about in list or tweet form, and reading reviews (or this piece, sorry) can be aggravating to someone who hasn’t seen the film; it probably seems like writers have been dancing around a judgment call. But it’s hard to get into the film’s specifics without sounding like you’re describing an insanely ambitious failure, which is definitely half-true. You want plot points? There are some larvae, and some dust on some leaves, and a bag of dead pigs that oozes this blue stuff that colors some orchids. You can’t even slap the old “Oscar contender” sticker on it, like you would for any other obtuse independent or foreign film, because it would be both wrong and beside the point. So you just say “See it if you liked Primer” and you start to feel like you’re losing track of how to adequately talk about movies as pure experiences.

Of course, in the middle of this collection of indescribably effective ellipses, there’s the most conventional dynamic of all: a love story. And if I want to extract one strand from the noodly soup of Upstream Color as something that made my moviegoing year what it was, it would the relationship between Kris (Seimetz) and Jeff (Carruth), two subjects of a bizarre brainwashing experiment who find themselves drawn together vis-à-vis two pigs on a farm in Vermont to whom they have been hypnotically bonded. I know, right? How hard are you ‘shipping that right now? For most of the film, our lovers are robbed of much of their free will, impulsively getting married, going into frenzies when their porcine counterparts are under threat. Having no memories of their abductions and hypnosis, and without even fully acknowledging the fact that they are victims of the same crime who happened to meet and fall in love, they nevertheless start to piece together what has happened to them through their own shared memories and history gaps. Listen, I don’t think Carruth is making some kind of statement about monogamy or matrimony. I’ve only seen his two films, but I don’t get the impression he’s very interested in having a conversation about social or political structures. So outside that potential reading, is it still weird for me to think that all of this was super-duper romantic? If for no other reason than its ineffability?

My favorite film romance of the year had no resemblance to any romance I’ve been witness to onscreen or off, except in the one way it’s like every romance, and, if you’re lucky, a really good movie now and then: It’s an entanglement. It’s a joint insanity. Words will fail you if you try to explain it to anyone else, part of you will always be drawing inward, huddling in the protective bathtub of your private experience. You can share moments of it with a third party, but you can’t expect it to stand for the actual experience. It needs all its elements, hanging together as some kind of unexplainable whole, in order to properly hypnotize you.

Billy on the Street, Forcing People to Sing Christmas Carols With Amy Poehler