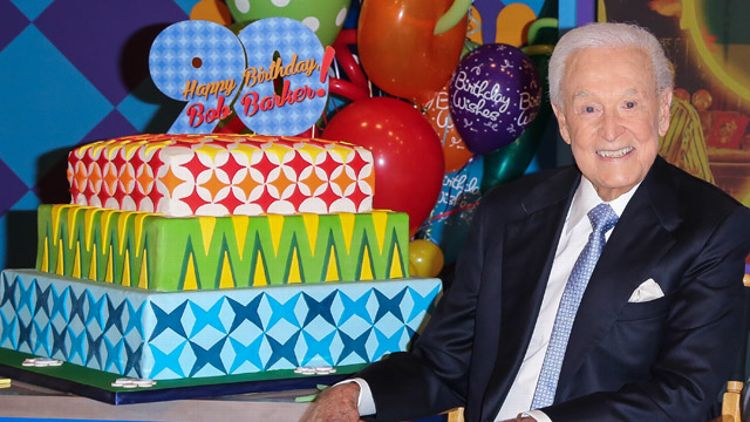 Bob Barker was born on December 12, 1923. Today is his 90th birthday. In celebration of this life milestone, he made an appearance on the now–Drew Carey–hosted The Price Is Right.

No disrespect to Drew and what he’s done, but this is still Bob’s show. And while a new generation of kids calling in sick will now know the show as one hosted by Carey, when the big guy is in the room, it’s as if he never left.

Bob Barker is magic. And he creates magic. Because he’s made out of magic.

Watching the episode, one that Carey still hosted but in which Bob occasionally appeared for cameos, I knew something special was bound to happen. Well, I thought I knew, until we were introduced to Hollie.

Hollie and her UCLA friends showed up to Bob Barker Studios, turnt. And Hollie was the perfect representative from the crew to get picked: a shouter, a giggler, typically confused, and probably six Molly-water flip-cup games deep.

But as OMG’d out as Hollie was, she’s a winner.

But that wasn’t magic. That was just standard The Price Is Right. I wanted more, but with the show steadily trucking along, I worried that perhaps I wouldn’t get it.

And then, after a commercial break, Drew made an announcement. For the first time in The Price Is Right‘s history, Bob was going to be the one to call someone down. His pick: Evelyn.

I knew she was the one. From the way she reacted with her crew to those little bang situations to her tendency to squint when she couldn’t hear something, it was clear she was Bob’s magic.

In her first round, however, she didn’t guess correctly. Another woman actually guessed the price exactly, so she got an extra $500. For a moment, I thought perhaps I was barking up the wrong Magic Bob Tree with Evelyn.

But I stuck with her. And the next round, she got picked. And upon reaching that stage, she let Drew know, in the most polite way possible, how to appropriately address her.

She was not Evelyn. She was Gail. And so it was.

After some chitchat, the prizes for her game were outlined: first a camera and then a surprise. Because Gail was the only person to ever get called down by Bob, and this was a special moment, should she win the game, SHE’LL GET A NEW CAR.

And a few minutes later, Gail was the proud owner of a new Dodge. I knew she was the one. Barker magic was happening. Little did I know how much deeper it would get.

After winning the car, Gail and two other previous contestants went to the wheel to see who would make it to the final showcase round. Because words cannot do it justice, just know that watching it live was the closest thing to the finish of Auburn-Alabama that I think I’m getting in 2013. This is just the stuff of legends.

You mean to tell me a lady spins a 65 and then goes for it and somehow doesn’t go over 100 and gets a total of 90 and then a guy follows her and spins a 65 and then a 30 for 95 and then GAIL WALKS UP COMPLETELY CONFUSED ON THE RULES AND WHAT THE PREVIOUS PEOPLE HAVE SPUN AND, IN THE MIDST OF SEVERE SELF-DOUBT, SPINS THE WHEEL, FALLS DOWN, STAYS DOWN, HITS 100, AND DOESN’T EVEN REALIZE IT UNTIL CAREY TELLS HER?

The spirit of this still-living Barker was in the room. And it was thick. He made that happen. He gave Gail the strength to spin that wheel, so strong that she couldn’t even get up.

And even though Drew failed to help up Bob’s queen when she reached for assistance, she was ultimately rewarded in the most spectacular of ways.

Gail was going to the final round. Her opponent:

It only seemed right. One person, a woman who has probably waited decades to finally meet Bob Barker, and another, a college student who has no idea where she is. Would good triumph over evil? Would this fairy tale script for Gail manifest itself in the ultimate prize? Or would Hollie walk away with a car and enough money to throw Westwood’s version of Project X?

Sadly enough, Hollie wins. It’s depressing for everyone. Especially for Bob. We know this, based on the presentation of the showcases. It was the standard The Price Is Right outline of the prizes for Hollie, but when it was time for Gail, Bob came out of nowhere to tell her what she’d win.

And, for almost four minutes, The Price Is Right reminded you that old love is the realest love.

Bob called Gail his soul mate. If you don’t feel something right there, something’s wrong with you.

If you don’t die from a cute spell when Bob begins describing a place and says, “The scenery is just breathtaking” and Gail interrupts and asks, “Is it Alaska?,” then I can’t believe you actually have a soul.

It wasn’t Alaska, Gail. BUT IT WAS HAWAII, WHICH IS LIKE HOT ALASKA, I LOVE YOU SO MUCH.

The way Gail looks at Bob while he weaves together fairy tales that happened to be about St. Louis cannot be topped. Only true adoration can create that much swoon when the topic is a Cardinals game.

Gail may not have won the battle, but she definitely won the war and the hearts of everyone who watched her performance on The Price Is Right — most importantly, Bob Barker.

Birthday presents don’t get much better than Gail.