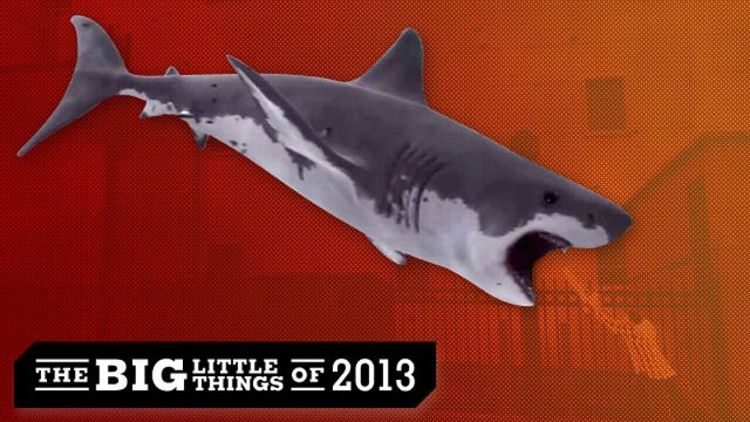 For one magical July night, a made-for-Syfy feature film captured the hearts and bile ducts of a nation. The film was Sharknado, so named for the Los Angeles–terrorizing cyclone filled with watery predators that serves as the movie’s primary antagonist. This is the greatest possible endorsement: The only thing I have to do to show how special the climax of the film was is simply list the events as they happen.

Movie hero Fin (ocean word!), played by Ian Ziering, having recently sent a Hummer loaded with nitrous tanks into the sharknado in the hopes of dispelling it with the explosion — it works, kinda? — has acquired a conveniently located chain saw in a parking lot and is in the process of running back to his estranged family with grim declarations of “I’m gonna finish this,” which he appears to have already done, because sharknadonitro explosion and all, but lo! Fin knows something we don’t!

Fin’s otherworldly sense of the trajectory of irregular objects in space can see there’s a great white among sharks cascading to Earth post-'nado, can see it’s headed right for his daughter, who is for some reason BRANDISHING AN AXE, a plot point that was not explored NEARLY enough in the movie’s final cut. And then Spawn-of-Fin just stands there staring like a jawless fish at her approaching father, who is screaming at her to GET OUT OF THE WAY, like, at what point during the whole AFFAIR D’SHARKNADO do we not maybe put our HEADS ON A SWIVEL, Fin heaves her out of harm’s way, and:

There are no words except descriptors: Displaying astonishing ups, Fin leaps directly into the gullet of the falling shark, chain saw a-snarling, and disappears from view. He reemerges moments later, chain saw first, dripping shark innards, and a few breaths later, REENTERS the body cavity, emerging with — could it be? It is! — the still-living body of Nova, his pluckiest employee, who of course was swallowed whole by the shark in a previous scene when her helicopter was thrown off course by a midair shark attack. We’ve all been there. Swallowed by that same shark. Of all the skyfalling sharks in all the world.

Sneer, dismiss, and lob passive-aggressive social media salvos at the gleeful frenzy that surrounded this phenomenon to the content of the shiny black pit where your heart should be, and then recall Maria Popova on Susan Sontag and pop culture: “[The] greatest peril of the false high/low divide is that it robs a writer — a person — of being able to absorb the vibrant wholeness and multiplicity of life with complete awareness, to be fully present with the world and attentive to all of its dimensions.” I don’t believe in ironic enjoyment, and you shouldn’t either. Live within the world and be attentive to all possible combinations of lethal animal hybrids on this Earth or any other. Like what you like, recognize that nothing anybody else has to say about it can tangibly affect your life, and wait impatiently for the sequel. It won’t be as magical. That’s fine. Recapturing the delirium of that initial airing isn’t humanly possible. That’s what made it so special in the moment.

But Sharknado will be surpassed, someday. Those who would say that’s impossible are forgetting the lessons of Mega Shark vs. Giant Octopus. Humanity’s capacity for invention is limitless, as limitless as the possible combinations of dangerous animals and threatening weather spectacles. Sharknado functions as both a milestone and a jubilant portent of wonders to come. You say a Possumconda and Hippocuda would never meet in the wild, could never exist in the first place owing to the incongruent origins of their component species, and would never, ever fall in love, so why bother telling the tale of their sordid romance? I’d reply with the words of George Mallory, confronting Everest: “Because it’s there.”