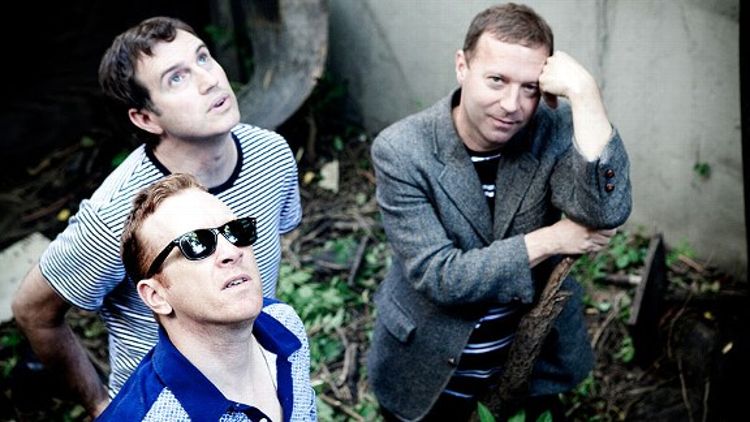 The Boston-based band Buffalo Tom is celebrating their twenty-fifth anniversary over Thanksgiving weekend with three concerts in their hometown. Longtime fan Mike O’Malley was asked to write some liner notes for their new album, Skins, but he couldn’t stop at just “notes.”

I first heard Buffalo Tom’s Big Red Letter Day almost two decades ago at the now-defunct HMV store in Manhattan. I donned a pair of city-shared headphones with no idea of how hard I was about to get walloped. As their songs swirled into my ears and took root, I was thumped with recognition and discovery. It was, to me, rock and roll at its best, delivered by three men from Boston who, with their voices, hearts, hands and instruments, took their influences and channeled them into something so original, passionate, and relatable I thought it had been created just for me. Here were men my age making music about things that mattered — how we navigate our lives though the messes we been handed and the messes we’ve made — and they were doing it with an authentic sound that had heft, texture, and drive. It did what we want rock and roll to do — distill potent observations about life while obliterating the sentimentality with guitars and drums.

This piece is, in part, a wish that more attention be paid to this great American band capable of inspiring even twenty five years after their formation. Who is Buffalo Tom? The basics: In the late ’80s, three guitarists at the University of Massachusetts Amherst formed a band. One of them, Tom Maginnis, moved to drums; another, Chris Colbourn, took up the bass and backing vocals; and the third, Bill Janovitz, became the lead guitarist and front man. They collaborated on music and lyrics, and with Dinosaur Jr.’s J Mascis producing, made two records and soon found themselves touring the world as alternative music took off.

For me, more than any other band during this period, Buffalo Tom harnessed its talents and delivered record after record filled with fantastic songs — and they did it by being unafraid to write about what they thought was important. In the song “Sunday Night,” Janovitz sings, “Where’s the solace you find, at the bottom of your mind?” It’s terrain that Buffalo Tom continually tills — the search for relief after relationships break, people move in and out of our lives, and expectations are recalibrated.

I met my wife at a party and asked her what ended up being a smart question: “What kind of music are you listening to?” We soon discovered that, in addition to small apartments and debt, something we had in common was our love of Buffalo Tom. The band was the glue for us in our long-distance relationship. We went to see them play any chance we could. We listened to their records nonstop. When we got engaged, we took a trip from Los Angeles to New York that was capped off by seeing BT. This was all before we met them.

When I got my own television show on NBC back in 1999, I finally got to connect with the men whose music meant so much to me. I asked them to write the theme song. My dream was that the track would become a big hit and my favorite band would strike it rich. It was called “Right or Wrong.” I loved it, and not just because it was the only primetime-sitcom theme song to mention a funeral home (even though the series had nothing to do with a funeral home).

The show was cancelled after two episodes. Not fun. But the debacle did introduce me to the members of Buffalo Tom. Some believe that meeting artists you admire can only lead to disappointment. In the case of Buffalo Tom, though, nothing could be further from my experience. All three are great guys, smart and driven. Men you’d ask to be groomsmen or pallbearers, men you’d be happy to see no matter the occasion.

Their new album, Skins, tackles universal subjects the average human can relate to. They sing about men and women who’ve been harmed by broken promises and who have the scars to prove it. The lift and clarity of Colbourn’s voice belies the sadness he brings to songs about love and marriage, unanswered prayers, people not listening to each another, skin being lovely to touch but too thin to bear criticism. In “Don’t Forget Me,” Janovitz sings about growing up, moving away, and remembering who you used to be, back when you were just beginning to form your own identity. He pleads with intensity, “Don’t forget me! Not me! No, no, not me!” It is powerful, rich, awesome material.

And roughly 18 years after I walked into that HMV, I am so glad Buffalo Tom is still making new music. I’ve seen these men get married, have children, and take on other jobs to pay bills. And 25 years later, they continue to strap on guitars, get behind the drumkit, and go to work. Even into middle age, they’ve kept the torch lit. It’s a true gift for which I am grateful.

Mike O’Malley, a.k.a. “The Rick,” is a writer on Showtime’s Shameless and an actor on Fox’s Glee. A version of this essay previously ran here.