‘Midnight Rider’ Filmmakers Turn Themselves in on Manslaughter Charges 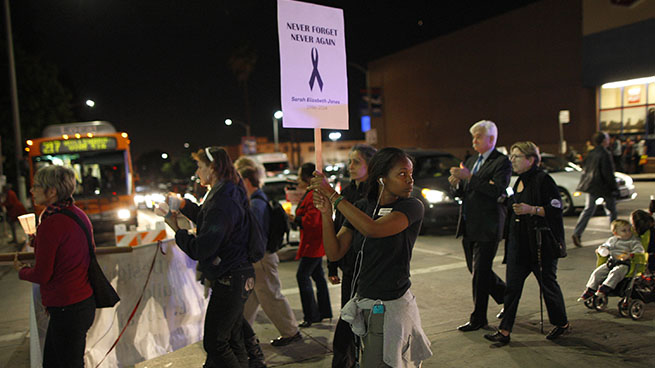 Midnight Rider was going to be just another biopic, one starring William Hurt as Gregg Allman. Everything changed in February, when Sarah Jones, a 27-year-old camera assistant, was killed in a train accident after being directed to set up an unauthorized shoot on a trestle near Jesup, Georgia. Six other crew members were injured. Hurt quit soon after. At the time, a Facebook group dedicated to shutting down the production and sending “a strong signal to the other producers who share this level of disregard for safety” had reached more than 10,000 members. (Today it’s got more than 12,000.)

Now director Randall Miller (CBGB, Bottle Shock) and producers Jody Savin (Miller’s wife and writing partner) and Jay Sedrish are being charged with involuntary manslaughter and criminal trespassing. If convicted, the three could face up to 10 years in prison. Miller and Savin turned themselves in to Georgia police together on Sunday and posted their $27,700 bail. Sedrish has not yet turned himself in, although he has one more week and is said to be making arrangements to comply.

“It was one of the most egregious tragedies on a movie set in recent memory,” Deadline writes, “because they were not permitted to be on the tracks.” Other reports say this information was concealed from the cast. In a personal email obtained by the L.A. Times, Hurt expressed his initial discomfort with the situation. “I said, ‘Sixty seconds is not enough time to get us off this bridge.’ There was a communal pause. No one backed me up. Then, we ….. Just went ahead. … We didn’t have sixty seconds. We had less than thirty.”

After the incident, Wayne County Sheriff’s detective Joe Gardner told WTOC News: “We treat any suspicious type of thing or serious accident as a homicide until we prove otherwise. And that reasoning is always, I guess, to ensure that we err on the side of caution.” Miller, Savin, and Sedrish were served with an injury lawsuit by their makeup artist, Antonyia Verna, in mid-June. By July 3, the involuntary manslaughter charges had been filed. There’s no word yet on a court date.