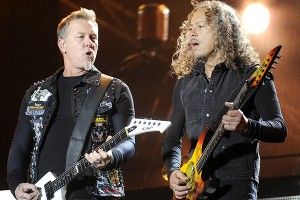 Hey, look who’s on Spotify. It’s one-time anti-MP3 crusaders Metallica! As Billboard reports, Metallica drummer Lars Ulrich showed up at a Spotify press conference on Thursday to announce that the band was throwing their entire catalog up on ‘ify. And, in the process, he ended up sharing a moment with Spotify investor Sean Parker, his former Napster nemesis.

According to Ulrich, “We wanted to see what were the best options out there … Spotify has really solidified itself as not only the leading streaming service but pretty much the only one. We were ready to jump as soon as we took control of our own masters.” As for the Napster lawsuit? “It was never about money; it was always about control.” And accidentally, according to Lars, a “street fight” broke out. Parker came up during Lars’ talk and called the two of them “more alike than different”; then they posed for some photos. Why, just look at them up there on stage, trying really hard to almost smile!

For those of us who actually used Napster, it’s hard to forget the images of Ulrich in a courtroom waging war against that then oh-so magical creation. It felt like a tin-eared move, a bunch of ruthless millionaires fighting to keep the unwashed rapscallions on the other side of their gated mansions. “Why they wanna take away Napster?” we wailed. “It’s sharing. We’re just sharing!” Of course, Metallica was right: Napster did kill the industry. If other acts had been as vigilant as Metallica in those early days — if Metallica’s crusade had led to a fortified artist-driven campaign to control the system — would the industry still be as cracked as it is today? A lot of what’s happened over the last 10 years would have been inevitable, to be sure. And either way, we’ll never know. For the most part, the rest of the industry didn’t want to come off like those spoilsport jerks Metallica.