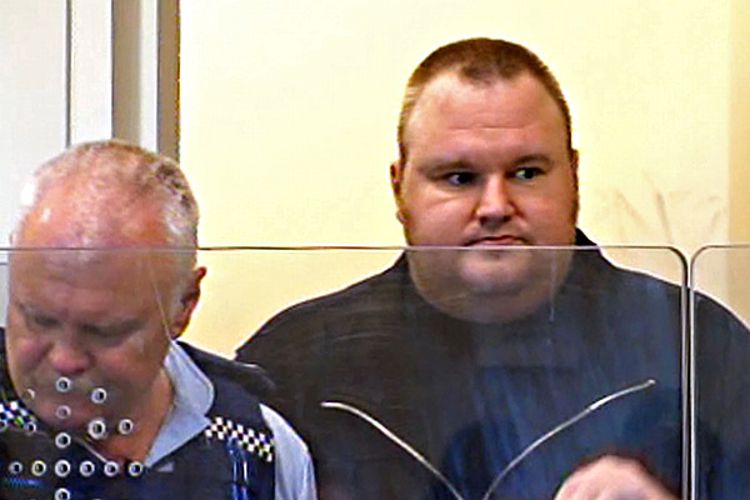 It’s not every day that you encounter a real-life practitioner of Bond-villainous ostentation like Kim Schmitz, aka Kim Dotcom, founder of the now-shuttered file-hosting network Megaupload. The German-Finnish hacker-turned-accused-copyright-infringement-magnate was arrested last Thursday by New Zealand police acting in cooperation with the FBI; he and his business associates, referred to, awesomely, as “the MegaConspiracy” in an indictment filed on January 5th in U.S. District Court, are being charged with “criminal copyright infringement and money laundering on a massive scale with estimated harm to copyright holders well in excess of $500,000,000 and reported income in excess of $175,000,000.” In happier times, Schmitz raced in the Gumball Rally and bankrolled lavish fireworks displays for his adopted homeland of New Zealand and star-studded music videos featuring artists like will.i.am (literally) singing Megaupload’s praises; shortly before his arrest, he became the world’s top-ranked Call of Duty: Modern Warfare 3 player, sitting at #1 on the game’s “Kills” and “Free-for-all” leaderboards as of three weeks ago. He was busted the day before his 38th birthday, at a $30 million rented mansion north of Auckland; he was allegedly hiding in a panic room with a sawed-off shotgun, like any innocent person celebrating a birthday.

Schmitz is six-foot-six, per Wikipedia, and weighs 285 pounds. He looks like Augustus Gloop grown up all muah-ha-ha; basically, the US government and the entertainment industry could not have asked for a better Dr. Evil figure to help them dramatize the inherent nefariousness of copyright infringement, unless Kim had been so kind as to pose for pictures stroking a fluffy white cat. The indictment (posted as a PDF here) is 72 pages long and packed with amazing details. The list of assets the authorities are looking to seize includes 59 different bank accounts, a $15,000 Devon Works Tread 1 watch made of bulletproof polycarbonate (described on Devon Works’ Website as “a big, bold sexy declaration of independence from the status quo”), a statue of the Predator, and a fleet of luxury cars, including Mercedes-Benzes with license plates reading “GOOD,” “EVIL,” “CEO,” “MAFIA,” “GOD,” “STONED,” “POLICE,” “HACKER” and “GUILTY.” (Some perspective: When Time Magazine profiled Napster cofounder and original file-sharing gangsta Shawn Fanning twelve years ago, he was driving a “newly customized” Mazda RX-7.)

Commissioning vanity plates to trumpet your Internet-outlaw status on a fleet of Benzes is crazy, but it’s by no means out of character for Dotcom. Way back at the dawn of this century, when he was merely a hacker-turned-entrepreneur known as “Kimble,” before he was arrested in Bangkok and fined €100,000 for embezzlement and insider trading, he made some endlessly entertaining video documentaries celebrating a cash-incinerating lifestyle that looks, in retrospect, like a dress rehearsal for the hyperindulged-international-superpirate role the US government has accused him of playing.

The first one (“©2000,” according to the retrospectively-ironic title card at the end—steal this chintzily edited home movie!) opens with the Dallas theme music and a montage introducing Schmitz and the Kimble Clan, including bespectacled “Matthias ‘SCUZZY’ Ortmann” (the future CTO of Megaupload, nailed along with Kim on Thursday), a white guy and a black woman billed as “Fanta & Cola,” and “Vicci and Gitta, the Bunnies.” (Gitta is apparently Gitta Saxx, voted Germany’s Playmate of the Century in 2000, and featured in 2011 on Ich Bin Ein Star, Holt Mich Hier Raus!,  the German version of I’m a Celebrity, Get Me Out Of Here.)

Kim rocks a stylish short-sleeved black kimono, shorts and two-tone wingtips; Kim poses with his fleet of Ferraris, with his Kimble.org helicopter. Kim and his buddy Keiwan Mirhaidari head-bob and air-guitar to a trance remix of “Rescue Me” while pushing 160 on the Autobahn from Munich to Monaco. It’s all very nerds-with-new-money: Kim can afford to buy or rent a helicopter with his URL on it but instead of champagne we see him drinking a can of regular Coke from a 24-pack. Then it’s nighttime, and we’re in Monaco, onboard “die zuper-zuper-yacht”—the Golden Odyssey, a 266-foot luxury motor yacht owned by Khalid bin Sultan, now Saudi Arabia’s Assistant Minister of Defense. The yacht has stairs, a coral-reef fish tank and a gym where women in heels can run on a treadmill if you happen to be making a documentary about the crazy shit that happens at your yacht parties. The guests at his fancy yacht party look like actors playing fancy-yacht-party guests in a porn film. Come aboard! Kimble ist expecting you!

Then it’s off to Jimmy*z, in Monaco (onscreen title: “PARTY TIME”), a nightclub where George Clooney is said to have enjoyed himself. Kim and his crew dance; Kim telegraphs his uncomfortableness by making goofy faces at the camera. Then unglaublich!—he runs into somebody who totally looks like Richard Branson and they have a 20-second conversation. The next day, they spot Branson again, from their luxury box at a Formula One race, although he doesn’t seem to know he’s being filmed. Then there’s a weird sequence in which Matthias Ortmann pretends to be sabotaging the race using his laptop and a program called “Kimble’s F1 Hacker.” He types in “EXPLODE”; cut to a pit crew frantically fixing one of the race cars. An announcer says, in English: “Oh my God—Schumacher is out of the race! His car seems to have major problems. Schumacher stays in the pit, but I’m pretty sure Kimble has nothing to do with it.” Cut to Kim pretending to cry like a baby, then cackling, giving the finger and making a fart noise. Later, there are speedboats. Announcer: “Oh, shit! [German German German] speedboat [German German.]”

Over the end credits, we see a Flash-animated cartoon of Kimble as a superspy going after Bill Gates (for “distribution of corrupt code”—Kim was known for proclaiming himself Gates’ intellectual superior in interviews) and, for some reason, Slobodan Milosevic; parties thanked in the credits include Haddaway, Saudi billionaire Prince Al-Waleed bin Talal, Richard Branson, Bill Gates, Boris Becker, “Kims Mama,” “Kims Psychiater,” Mercedes-Benz, Ferrari, Porsche, “und ale meine Freunde.” The English-language lyrics to the end-credits theme song are as follows:

Ready to get down

We just fool around

We take the time we have to make up another sound

Like reaching in the bag I pull out my mouse

It’s like chipping[?] my computer to create some fat sounds

“Kimble Goes Monaco Part II,” like all sequels, strains to top its predecessor; it’s the Teflon Don to Part I’s Port of Miami. More Ferraris! More hangers-on! A more lavish steam-table banquet! A champagne-spritzing Saint Tropez lingerie party! A Trap-a-Holics-style announcer peppering his German-language narration with stray English phrases like “all-inclusive,” “The boys are in town!,” “Kim-pire,” and “Fireworks, DJ, laser show!” Kim-posse members like Keiwan, Matthias and Gitta return, but they’re preceded in the credits—which borrow the theme music and wipe effects from Dynasty’s opening sequence by some new faces. Here’s Finn Batato, who would go on to become Megaupload’s chief marketing officer; he was arrested on Thursday, too. (The indictment names him as part of the overall MegaConspiracy but also specifically charges him with having circulated Megaupload links to infringing copies of the movies My Blueberry Nights and Dan in Real Life and Louis Armstrong’s recording of the song “We Have All The Time In The World,” which anyone attuned to the James Bondian aspects of this case will recognize as a soundtrack cut from On Her Majesty’s Secret Service.)

Here, too, and all over the video, is Frank Lämmermann, sort of a German Jean-Ralphio type with a towering head of shellacked ich-bin-un-zany-comedian hair, acting as de facto master of ceremonies. Lämmermann was apparently a presenter on the German music/entertainment network Viva at the time, and went on to conquer America with an appearance on Pauly Shore’s TBS series Minding the Store, which Google indicates was a thing that existed. A German message-board poster once said of Lämmermann, “For, instead of encouraging you to laugh stimulates only! Apart from that the guy is so annoying that one feels after a short time to give him the urge to become one with the baseball bat.” We’re pretty sure we agree; although his presence as host frees up Schmitz himself to drink out of a punchbowl and whip his male associates’ bare asses with a belt, it lends a self-conscious, Billionaires Gone Wild vibe to the proceedings, especially when Lämmermann is walking around with a shotgun mic interviewing women about their nipples.

Like the Jersey Shore kids returning to Karma, the Kimble Clan returns to the Autobahn, to the zuper-yacht, and eventually to Jimmy*z. They’ve been coming to this same party for years, and in no way is that depressing! The party continues back on the yacht—fireworks, DJ, lasershow!—and at some point Keiwan, egged on by other party guests, eats a whole onion. In a way, we’re lucky that all Kim went on to do was change his name to “Dotcom” and (allegedly) aid in the file-sharing-abetted downfall of the content industry; there’s a sociopathic emptiness to the proceedings on display in this second video. This is the party you have before you have the party where you rent out an island and hunt humans for sport.

Movie Star Ben Stiller to Slum It on HBO