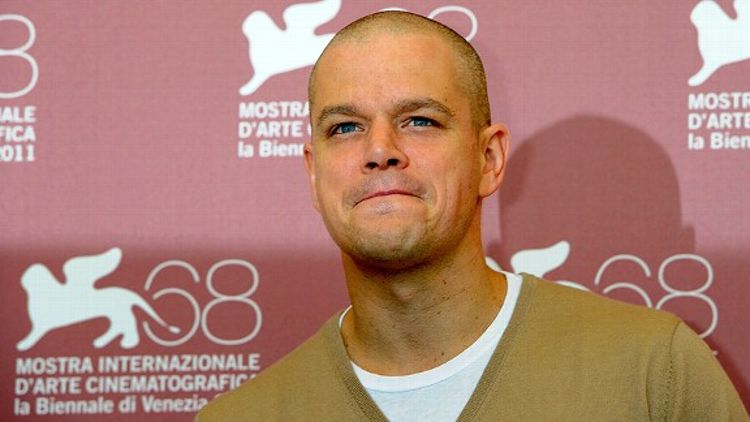 Matt Damon will direct and star in a movie he co-wrote with John Krasinski, who will also star. (Krasinski came up with the idea, and developed it with Dave Eggers). Details have yet to be released, but the movie is in the vein of Erin Brockovich, and will feature Damon as a salesman who “arrives in a small town only to have his life changed.” That is certainly a lot of information to digest, so let’s focus on what’s really important: in the vein of Erin Brockovich? Finally, Matt Damon in a push-up bra! Grade: A- [HR]

Scott Rudin will produce an adaptation of Karen Russell’s novel Swamplandia for HBO. The book, which revolves around a 12-year-old alligator wrestler searching through southwest Florida for her lost sister, will become a half-hour comedy. HBO is also developing Jennifer Egan’s A Visit From the Goon Squad and Jonathan Franzen’s The Corrections. And when’s the last time you even read a good book, Showtime? Grade: A [HR]

John Cusack will star in the comedy Carnaval, as a scout who goes down to Rio de Janeiro to sign the world’s greatest soccer player during the titular event, only to have the plan busted by his best buddy Johnny Knoxville, who tags along on the trip and ends up sleeping with the player’s girlfriend. In the movie’s climactic scene, the soccer player drops a flaming sack of Idaho potatoes on Knoxville’s balls. Grade: B [HR]

Marc Cherry has landed an hour-long drama at ABC called Devious Maids, which revolves around four maids in a tony L.A. neighborhood. The show is loosely based on Televisa’s The Disorderly Maids of the Neighborhood, set at condominium where the residents’ attempt to build a pool leads to a murder mystery. And if Devious Maids doesn’t work out, the Desperate Housewives creator is already planning a back-up: Dastardly Sanitation Workers. Grade: C [HR]

On Wednesday, Kanye West announced an album with his G.O.O.D. Music crew, which includes Pusha-T, Common, Big Sean, and Kid Cudi, by tweeting “GOODMUSIC.THE ALBUM.SPRING2012.” Get your Mr. Hudson jokes ready, everyone! Grade: A [Twitter.com/KanyeWest]

FX is developing a dark comedy called Drones from novelist Chad Kultgen and actor Milo Ventimiglia, which will revolve around drone pilots in Nevada. And while the development process has just begun, there are already rumors that the creative team is growing weary of Ventimiglia’s attempt to win every argument by banging his fist on the table and yelling out, “Well, that’s the way we did it on Heroes, and that seemed to work out pretty damn well for everyone!” Grade: C [Deadline]

Stephen Gaghan hasn’t made a movie since Syriana, but he’s getting back in the saddle with two projects: a Mexican drug cartel movie based on a Los Angeles Times series from earlier this year, and an adaptation of The Snakehead, the non-fiction account of Sister Ping and her multimillion dollar Chinese immigrant smuggling operation. When asked what he’s been doing since Syriana, which came out in 2005, Gaghan just reached into his wallet and, without saying a word, slid a well-worn Chuck E. Cheese punch-card across the table. [Deadline]