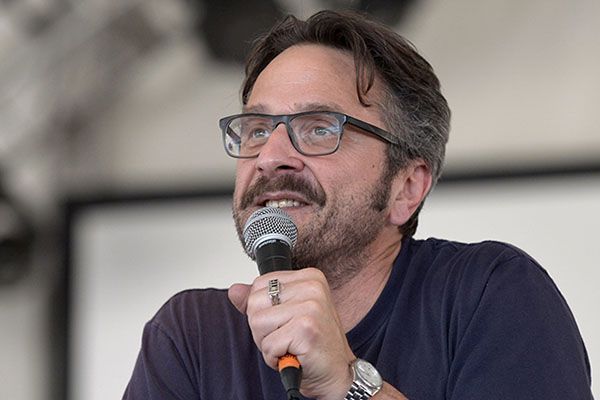 Fans of comedian Marc Maron and his WTF podcast now have a date with IFC on May 3. That’s when Maron’s TV show — titled Maron — will debut. So it’s Maron on Maron about Maron. The good thing is, you know right off the bat if this show is for you. The comedian and podcaster will play a fictionalized version of himself, a comedian and podcaster, working out his neuroses or merely airing them via his garage podcasting studio. One suspects this is Maron’s attempt to get on the Louie train, but Louis C.K. didn’t even really seem to be getting on the Louie train for about half a season, so who knows?

We do know that Maron will be welcoming a slew of guest stars to sit in the fictional podcast chair: Mark Duplass, Danny Trejo, Bobcat Goldthwait, Adam Scott, Aubrey Plaza, Illeana Douglas, Dave Foley, Eric Stoltz, and Ken Jeong will all be on hand. In addition, look for regulars like Judd Hirsch (as Marc’s dad), Andy Kindler (as Marc’s pal), and Nora Zehetner (as Marc’s girlfriend).

Maron and some of the writers/producers of the show presented clips from Maron to a “packed house” at South by Southwest in Austin on Sunday night, as that seems to be the way things are done nowadays.