The Kardashiad, Week 7: Some People Call It ‘The Projects’ 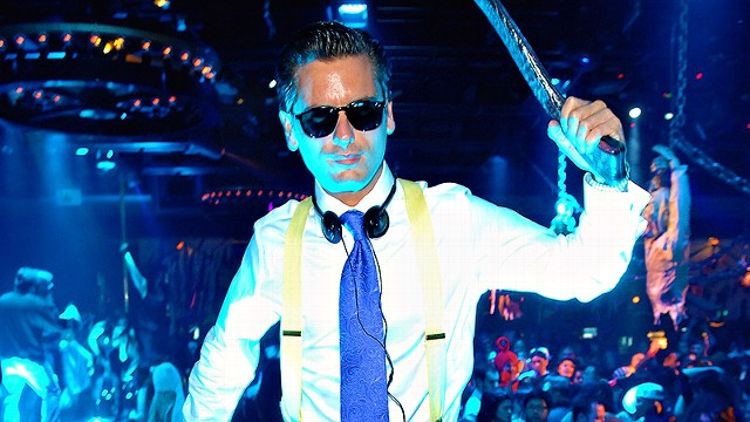 Kim goes to get something called a “blood facial” from, I don’t know, the vampire doctor, I guess? “I like anything that makes you look and feel youthful,” she says, and while she doesn’t add “especially if it also seems like something a witch would do,” it’s sort of implied. Shit gets real Cronenbergian real fast. The doctor draws Kim’s blood, centrifuges out the platelets, and then re-injects them into her face with a device that we’re told has nine tiny electric needles in it. BLOOD FACIAL, America. Celebrities: They’re just like us! Kim’s face is a mask of tiny blood drops and also agony. She vows never to get a face-lift if it hurts like this. I would like that in writing. Nothing about this sequence is surprising except the fact that Kim’s using her own blood and not poor people’s. A reminder: The Kardashians are living in North Miami this season because no neighborhood in regular Miami was willing to accept them as temporary residents. According to Wikipedia, Kim and Kourtney are the first people in history to whom the city of North Miami has given its key, although they named a high school after Alonzo Mourning and his wife Tracy in 2009. Kim and Kourtney were presented with the key in mid-November of last year, at a ceremony the Miami Herald described as “decidedly unburdened by Hollywood glitz … a buffet-style reception featured paper plates, clear bags stuffed with dinner rolls and a sheet-caked [sic] decorated with a frosted turkey.”

Kim asks the city manager of North Miami questions about North Miami’s crime rate — it’s one of the 100 most dangerous cities in America, according to Neighborhoodscout.com — and before the meeting’s over she has convinced the city manager to hook her up with the local P.D. for a ride-along. “I have this sick, twisted fascination with investigating,” Kim says. Quick callback montage: scenes from the Keeping Up With the Kardashians episode from last season where Kim and Kris Jenner spied on Bruce and caught him playing golf with Angie Everhart.

Some time later, in the breakfast nook: Scott’s eating a salad. Mason is doing a puzzle. Kourtney’s talking about how she’s having a hard time losing her baby weight. She says she’s worried about dieting because it might make her milk dry up. Scott says, “If I had fallen in love with you a couple pounds overweight, this would be my ideal weight, but I fell in love with you when you were super skinny, so,” Scott says. Kourtney says, “That’s nice.” Scott talks to the talking-head camera: “I just feel like she would feel better if she got back into the shape that she feels more comfortable in,” a sound bite you’ll definitely hear again tomorrow night on E!’s hottest new clip show, Tautology Soup.

Nighttime. Kim, Jonathan Cheban, and Larsa Pippen hit the streets in a black SUV. Kim’s driving, and also checking her teeth and her phone, because if it came down to it E! could probably make the death of a pedestrian go away. Kim’s preparing for her police ride-along by looking for crime, which North Miami seems rather eager to provide; some ladies are shimmying over a fence and Jonathan takes their picture with his phone. He shows it to some blurry-faced cops, who take it under advisement, and I scribble “snitch” on the butcher-paper roll where I keep my list of Jonathan Cheban’s bad qualities.

“Do you ever wear bathing suits to the beach anymore? You always have, like, these grandma cover-ups on,” Scott says to Kourtney, at the beach, and then some sand gets in his eye, and within about 45 seconds of screen time both the Kourtney and Scott’s Terrible Marriage B-plot and the Scott Does Some Idiotic Thing As Comic Relief C-plot are set in motion, because say what you will about this show, it gets shit done.

“Have you ever shot someone?” Kim asks Crystal. “Have you ever been shot?” No and no. There’s a shots-fired call, the cops roll out. “It’s so exciting,” Kim says. “It’s such a rush.” Turns out it’s just some dude who has apparently smoked something inadvisable. He’s wailing on the floor in the hall of an apartment building with cops asking him, “Did you do anything besides the weed? Do you know if the weed was dirty?” Kim says, “I was so relieved to find out that it was just someone having a really bad trip on drugs [and] no one was hurt,” which is obviously a lie. I should point out that she’s wearing a surprisingly practical outfit in this scene — running shoes, leotard pants.

“What do you do when you need a snack?” Kim asks Anne Marie, clearly excited to have a face-to-face encounter with a person whose whole life isn’t shaped by the indulgence of moment-to-moment whims.

“You let me know whenever you need to stop for something,” Anne Marie says, and it’s a joke, but Kim looks at her and says, “We could get a soft-serve or something.” (Totally polite, but also dead serious, like it’s not optional, like Kim is either going to have a soft-serve or Anne Marie’s badge, it’s up to Anne Marie.)

They hit the drive-through of a McBlurredOutCorporateLogo’s; Kim orders a small fries and hot fudge sundaes. I’m pretty sure I could watch 90 minutes of End of Watch–style dashboard-cam footage of Kim Kardashian pretending to be a cop — sitting on stakeout, maybe asking Anne Marie if she’s ever re-injected her own blood platelets into her face to look youthful.

Later Scott’s just hanging out with Kim and Kourtney in the bathroom, like you do. Kourtney weighs herself; she weighs 150-something pounds. “I feel like 93 is the dream,” Scott says, adding, “I’m just giving you the motivation to get to where I know you’d be happy.”

The next day, Larsa and Kim are in Kim’s walk-in daydreamatorium/closet, talking about outfits. “I am, like, so obsessed with detective work,” Kim tells Larsa. Larsa pretends this is a surprising admission, like she hasn’t been briefed, and then tells Kim that she should meet Jake, an ex-CIA agent (“or something”) that one of Larsa’s friends (or something) hired to put a tracking device on her husband’s car. “She found all this dirt on him,” Larsa says. And, hey, Larsa just happens to have Jake’s number in her phone, and Jake happens to know who she is when he picks up. Jake talks to Kim, explains that he does a lot of pro bono child-recovery work, offers to let her shadow him on a case. “I love to help people,” Kim says to the talking-head camera, which isn’t true. “Kidnaps and murders — help families really find their truth,” she says to Larsa, which isn’t a sentence.

The doctor puts some drops in Scott’s eyes. He’s a gigantic pussy about it.

Jake shows up to the house to meet Kim. He’s in a leather blazer and snakeskin boots; his facial hair looks like a disguise. He’s rolling with Joe and Cooper, his operatives, both African American. Cooper’s ex-Miami-Dade P.D., Joe looks like a young Dennis Haysbert. They show Kim some spy-store stuff — periscopes, rearview sunglasses, the usual — and then break down the case they’re working on. Fara’s a 15-year-old runaway. Jake says she can go with them to Fort Lauderdale to question her father. “I can’t believe that Jake is actually letting me help out in a real kidnapping case,” Kim says. I’m sure the people who hired Jake to investigate this real kidnapping case are equally surprised.

Scott’s walking around the mall with his eye bandaged. “Everywhere I go, people are just staring and making fun of me,” he complains to Kourtney. “They’re just staring because you’re Lord Disick,” Kourtney tells him, but he’s not buying it. Maybe they’re staring because he’s walking through the mall with a camera crew walking backward in front of him? Either way, it’s a tough situation. “He doesn’t want to be recognized in person,” Kourtney says. “I’ve never seen him like this.” Later, she presents Lord Disick with custom-made “LD” eye patches, telling him, “You need to be confident and rock this situation.” Problem solved! Also, problem dumb.

The visit to Fara’s dad, Freddie from Fort Lauderdale — who looks like he’s really going to rest easy now that a famous person who did a four-episode arc on Drop Dead Diva is on the case — turns up a lead, courtesy of a young lady who’s maybe Fara’s sister or her half-sister, who tells Kim and Jake that Fara had a boyfriend. “I really do think that this boyfriend will have a lot of information and be helpful,” Kim says, like she’s just traded a Saudi prince a Lambo for Ibrahim Sayeed’s mother’s phone number. She stays up late looking at Fara’s social-media presence — her Facebook page, the boyfriend’s Facebook page.

The next morning she meets with Jake and his team. Kim’s in sweats and her hair is slicked back in the manner of a no-nonsense person. Jake’s checked out Kim’s social-media findings. The boyfriend turns out to be a 29-year-old with “gangsterish” tendencies. “He’s prostitutin’ this girl,” Joe says, adding, “He told Fara, ‘You ever leave me, I’ll kill you.'” Kim says, “Wow.” This is like that time William Vollmann freed a sex slave.

Meanwhile, like the all-nonsense person he is, Scott’s driving around in his custom white-on-white Rolls, crowing about his eye patch. He meets some friends for lunch. They seem really cool. They all look like professional gigolos. Later, at home, Kourtney asks Scott why he’s giving her such a hard time about her weight. Scott says, “Why wouldn’t I? You’re my piece of machinery!” and she throws him out of the room. He comes back later and she’s crying and they have a serious conversation where he tries to seem contrite but he’s still wearing the eye patch and it’s kind of a mixed message.

Intense Jan Hammerish Miami Vice music, shots of moody, dark Miami streets. Kim, in the car with Jake, asks, “What part of town is this?” Jake says, “The projects, is how some people refer to it.” Kim makes a serious-person face. They meet up with Joe and Cooper; they’ve found the guy, but they can’t go in and grab Fara because they’re not actually law-enforcement officers. Kim — who, as one of Kris Jenner’s daughters, probably feels a lot of empathy for exploited children — is aghast.

Commercial break: Looks like Giuliana Rancic’s going to interview Kristin Cavallari later, probably about string theory. And we’re back. Joe explains to Kim that going inside and grabbing Fara would constitute re-kidnapping. Kim is either unable or unwilling to accept this for a minute but eventually everything’s cool and fist-bumps are exchanged.

Mason and a sans–eye patch Scott frolic in the wave pool. Kourtney comes out and drops her robe to reveal a one-piece bathing suit, and domestic détente is once again restored. “In the future,” Scott says, “I will definitely make sure I don’t say any silly comments that offend her.” I would also like that in writing.

Kim and Jonathan are eating what I think is takeout falafel the next day when Jake drops by with bad news. Fara’s case is now in the hands of local law enforcement, which is bad news because as we learned this week, local law enforcement is pretty busy driving socialites around on ride-alongs and dealing with dudes who’ve been smoking that ill Jacob’s Ladder shit. So there’s nothing Kim can do except call Freddie and give him an update. “I’m dreading this call,” she says. “It’s, like, a lot on the soul.” So much so that before the call is over she’s picked up another phone and started texting.