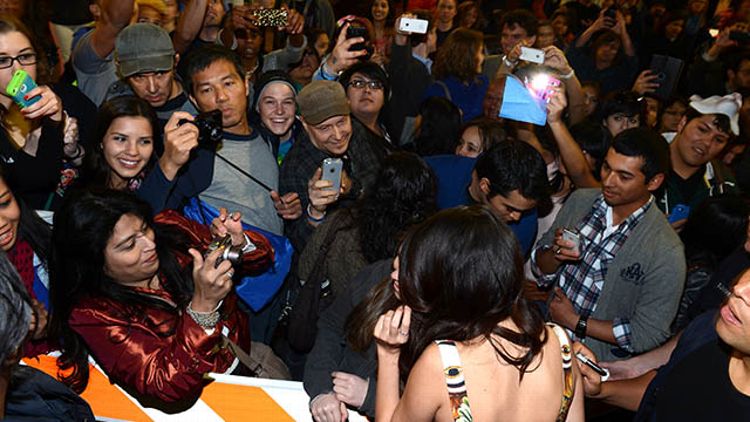 Writing about a festival is always a difficult task, because if you’re there, you care, and if you’re not, there’s nothing worse than absorbing the coverage. Because you’re not there. This is especially true about South by Southwest, because instead of being a simple weekend, it clocks in at an aggressive 10 days.

Things like the red carpet of the North American premiere of Spring Breakers.

Talking about how awesome it was to be present and how cool it was to be so close to the stars would be obnoxious and, again, completely self-serving. So I won’t do that.

Actually, I found these on my phone, too:

Know that none of these photos matter. Seriously. Completely erase them from your memory. Why?

At some point, each of the film’s stars in attendance (Selena Gomez, James Franco, Rachel Korine, and Ashley Benson, as well as director Harmony Korine) had to make their way to my Cronkite-like interview station.

Some things working against me:

Some things working in my favor:

Their answers couldn’t have been more perfect. And to make it better, the responses got increasingly more absurd and beautiful with each visitor to my Gucci silo.

“Gucci’s awesome. Gucci’s like — I guess kind of like exactly what you’d expect. I think he’s one of the greatest Americans. He really is. He really, like, is the real deal. He’s an amazing dude. A real artist.”

“Gucci. Is. Awesome. He’s my teddy bear. I love him. He’s awesome. He would do concerts in the middle of filming, he’d be like ‘Yo, I gotta bounce to my concert,’ and I’m like, ‘WHAT, we’re, like, filming a scene right now,’ and he would leave until, like, three in the morning and then come back and then continue his scene. It was crazy. But he’s such a sweetheart.”

[Note: I cheated and sneaked a second question to Ashley about Pretty Little Liars, because if I hadn’t, I’d bring shame to my community. That question: “Are you on the ‘A’ team?” Ashley: “I can’t tell you that. I wish I was. Let’s just say I am.”]

“Gucci was great. I think this is really the first time he’s acted. He said he’d acted in a little movie in Atlanta that he was making, but this was the first time he’d acted with a director of Harmony’s caliber. And I found that I really enjoyed doing the scene with him, because it was like — it seemed like he almost learned them like music. Like, the more we did them, he kind of got into a rhythm or something. You could see his confidence rising every take we did. And it was great.”

The answers proved to be too much for my little heart to handle. I couldn’t even go see the movie. I had to walk around Austin for 30 minutes and collect myself, not because of my own experience, but because of the overwhelming positivity expressed toward Radric Davis, now recognized on record as one of our greatest Americans.