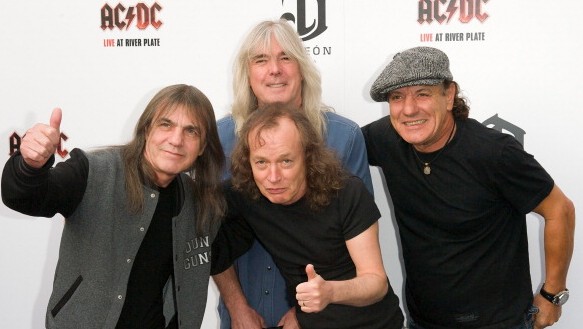 Just days after the troubling “AC/DC is over” rumor first sprung up, it’s been put to bed. It turns out, sadly, that Malcolm Young is indeed suffering from poor health, and will need to take a break. But the band has let it be known that it shall persevere. Rejoice, rockers: Acca Dacca lives.

The official statement: “After forty years of life dedicated to AC/DC, guitarist and founding member Malcolm Young is taking a break from the band due to ill health. Malcolm would like to thank the group’s diehard legions of fans worldwide for their never-ending love and support. In light of this news, AC/DC asks that Malcolm and his family’s privacy be respected during this time. The band will continue to make music.”

And so, first, a moment to wish Malcolm Young the best in health, and to appreciate his manifold contributions. The layperson most likely gravitates to Angus, Malcolm’s little brother, as the face of the franchise; both Brian Johnson, the frontman since Back in Black, and Bon Scott, the late great madman who first made the band famous, get their fair share of adulation as well. But the ride-and-die coalition can tell you Malcolm is just as crucial: Not only did he found the band, way back in 1973, but he’s also cowritten pretty much every song they’ve jammed out since. That means he cowrote “Thunderstruck.” Please: Show the cowriter of “Thunderstruck” the respect he deserves.

Second, here’s Johnson, elaborating for the Telegraph on the future of the band: “We are definitely getting together in May in Vancouver … We’re going to pick up some guitars, have a plonk, and see if anybody has got any tunes or ideas. If anything happens, we’ll record it.” Also: “AC/DC is such a tight family. We’ve stuck to our guns through the Eighties and Nineties when people were saying we should change our clothes and our style. But we didn’t and people got it that we are the real deal.”

Now, onto the overarching issue: Why, exactly, should you care about AC/DC existing or not in 2014? Yes, you’re right: These guys did perfect their sound decades ago; they did craft their last timeless rock monster ages back; they have, in many senses of the word, peaked. We will, forever, have old AC/DC. No, we do not need more AC/DC.

So why care? Because AC/DC, goddamnit, is about doing the same dumb thing, again and again, forever. The members of AC/DC get up in the morning, they plug in their guitars, and they make rock. Finger-bleeding, face-shattering, earsplitting rock. It’s not about innovation, growth, inspiration. It’s about doing the damn thing. Every day. Every day. Every day they write “Big Balls.” As Angus supposedly once said, “I’m sick to death of people saying we’ve made 11 albums that sound exactly the same. In fact, we’ve made 12 albums that sound exactly the same.” Boom. Face. The men of AC/DC do not care if you are not even dimly aware whether their latest album came out last week or the fall of 1987. They know what you think of them, and they do not care. Because AC/DC wants this shit forever, man.

Get well, Malcolm. Go forth, Aussies. And for those about to just keep on rocking forever — we salute you.

What’s It Take to Stump the Amazing ‘The Office’ Video Clip Stare Machine?