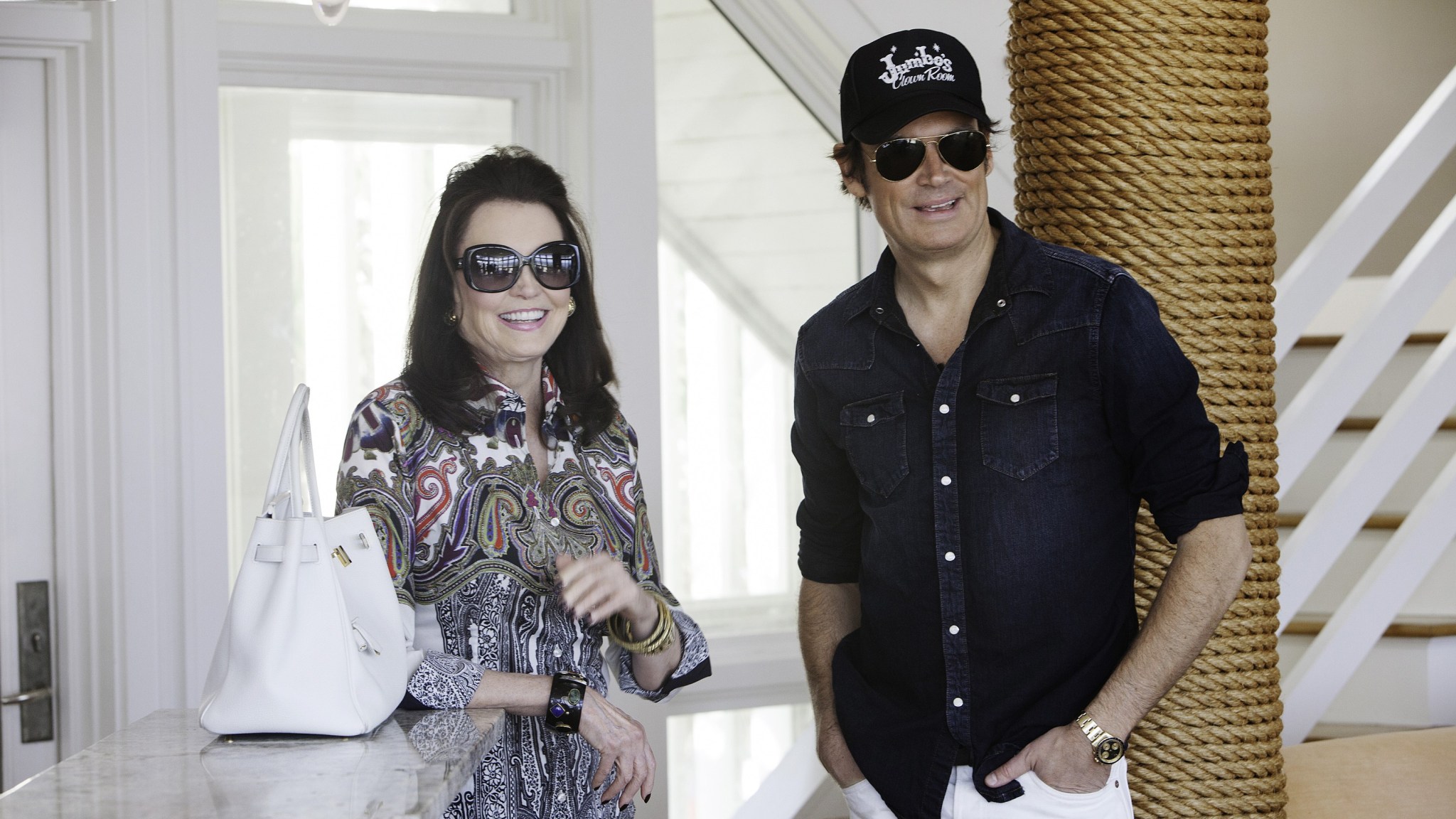 I love weeks when the reality show roster is shallow, the shows that are in the rotation turn in mediocre episodes, and it feels like there isn’t much to write about. I love these weeks because these are the weeks when the column gets weird. You have to dig to find the nuggets, and oh, what sparkling rocks I’ve found. There’s an update on the weird watch Married at First Sight, a half-assed intervention on Southern Charm, and a promising “this season on” from Shahs of Sunset. However, none of those precious stones sparkles like the discovery my wife made about Whitney from Southern Charm. Let’s start there.

I love my wife. I love my wife for many reasons. One of those reasons is that she will do the deepest research dive on subjects that don’t deserve such treatment. Often. She once spent days constructing a document detailing the bridges of Connecticut’s Merritt Parkway. She’s spent hours learning the origin story of a tin box that found its way into our home. Recently, she set her research sights on a character from Southern Charm. I realize that many of you are not watching this show. That’s fine; the show isn’t that good. However, there is a certain character who needs to be recognized for her greatness: Patricia Altschul.

Patricia is no joke. This chick, the widow of a Goldman Sachs partner, is a former New York socialite who relocated to Charleston. When she gets press to promote the upcoming season of the show, she gets it from Vogue. Oh yeah, her butler presents her shoes to her on a silver platter.1 She also travels with a butler who supplies Patricia with her own martini fixings. She also has breakfast served in bed every morning, and she has TWO homes that have been featured in Architectural Digest. I know that she may sound like a villain in an Austin Powers movie, but she somehow pulls this all off while remaining likable. Patricia is fascinating — so fascinating that she inspired my wife to go on a deep dive about her. My wife unearthed a lot of good intel, but nothing better than what she learned about Patricia’s son Whitney Sudler-Smith.

Whitney is not only a character on Southern Charm, he’s also one of the executive producers. And Southern Charm is not his first foray into the entertainment industry. Whitney is a filmmaker. He directed a film about famed fashion designer Roy Halston Frowick, better known as “Halston.” My wife’s research led her to the Rotten Tomatoes page of said documentary, which led to some reviews of the film. Let’s have a look at what the New York Daily News had to say about it:

Like many inexperienced directors, Sudler-Smith labors under the impression that he’s as interesting as his subject. So he bumbles about New York, making us watch as he asks celebrities, models, and journalists to do his job for him.

OK, maybe that was just a tough review; let’s see what the Los Angeles Times had to say:

The spotlight-hogging director is star-struck first-timer Whitney Sudler-Smith. His on-screen contributions showcase how, over the two years of globe-trotting that it took to shoot the film, he switched up his personal retro style. That, combined with his clumsy interviewing, makes for a performance bordering on parody.

OK, OK, OK, it can’t be THAT bad, can it? Let’s ask the New York fucking Times what it thinks:

If you’re curious about him, skip this film. Read about him — you’ll learn far more on his Wikipedia page — and look at his clothes. And if you’re a filmmaker, go out and make a decent movie about him: he deserves it.

One would think that these types of reviews would lessen my wife’s interest in, you know, watching the film. They did not. Before I knew it, we were actually watching the film that Whitney from Southern Charm made about Halston.

Now, before I start telling you how shitty this shitty film was, there is a lesson that I want to share. One of my professional mentors made an offhand comment that has stuck with me for more than a decade and is important to understand: “Just doing something is a huge accomplishment.” I doubt he would even remember the moment, but it is an important lens through which to look at art. This is the greatest Halston documentary ever made. Fact. Why? Because it is the only Halston documentary ever made. I have not made a better Halston documentary than Whitney has, but GOD DAMN what a bad Halston documentary Whitney made. I can’t even pretend like I watched the whole thing — that would be impossible — but I can tell you for certain that this film was so bad, it was brilliant.

First off, the film isn’t about Halston, it is about Whitney. Don’t believe me? This is how it opens:

The ’70s had everything: sex, drugs, disco, and great fashion. When I was a kid, I used to read about Halston in magazines, reigning over Studio 54, surrounded by beautiful models in a cloud of cigarette smoke. To me, he was the coolest. My name is Whitney Smith, and I always wanted to make a film about that glamorous and decadent time. I set out in search of Halston.

After the (well-done) opening sequence, Whitney mentions Halston twice in the introductory segment and himself four times. This would set the tone for what would be one of the oddest film-watching experiences I have ever been a part of. The first interview is with Liza Minnelli. Now, as a video producer, I could bore you with all sorts of minutiae about the production value, but I won’t. Just imagine that everything I describe looks as if it were shot by a drunken 7-year-old with an iPhone. Anyway, during the Liza interview, he (1) asks to touch her pants; (2) suggests that she was “the only one that stuck with him until the end,” not realizing how disrespectful that was to both his interview subject and the, you know, deceased subject of his film; (3) said, “You sang at his memorial, right?” when she did not; and (4) at the end was told by Minnelli to “go do some research.” All that happened in the first 10 minutes, and the strangest thing about it is that HE IS THE FUCKING DIRECTOR AND HE LEFT ALL OF IT IN THE FILM. Who was his next interview subject? His fucking mom. What did they do? This: 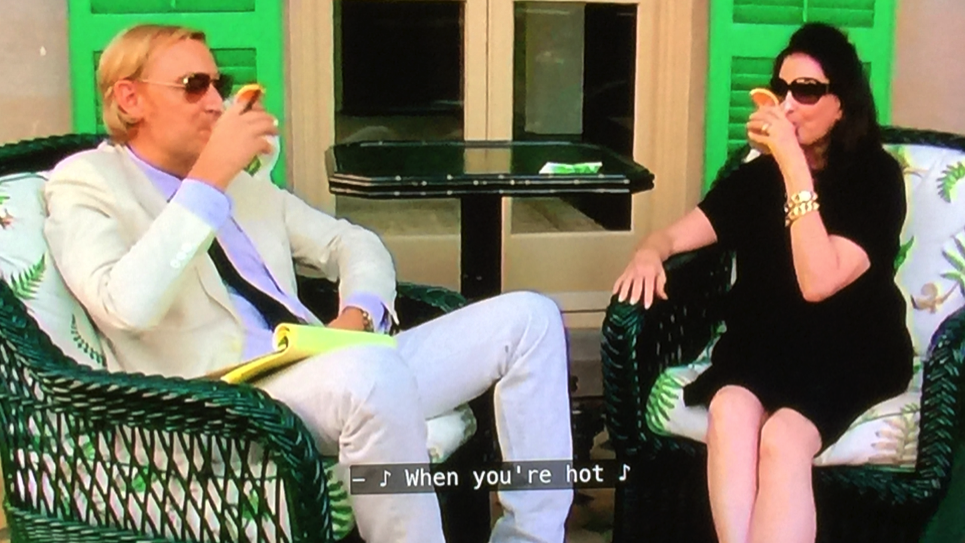 They drank cocktails in his backyard. I get that some documentary directors can’t help but put themselves in their films. I watched The Jinx and couldn’t imagine that project without seeing the director in it, because it helped the story. But Whitney is on some next shit. He is IN HIS OWN BACKYARD DRINKING WITH HIS MOM in a film about a fashion designer whom he never met. His lack of self-awareness is in every single scene of the film. They should give André Leon Talley some sort of tolerance award for not walking out of the interview he did with Whitney. And, oh yeah, did I mention that he uses shots of himself driving around in a Trans Am as transitions between interviews? And another thing, did I mention that he changes his look for each interview? Check this “I am doing a ’70s movie so I will dress as Jon from CHiPs” look: 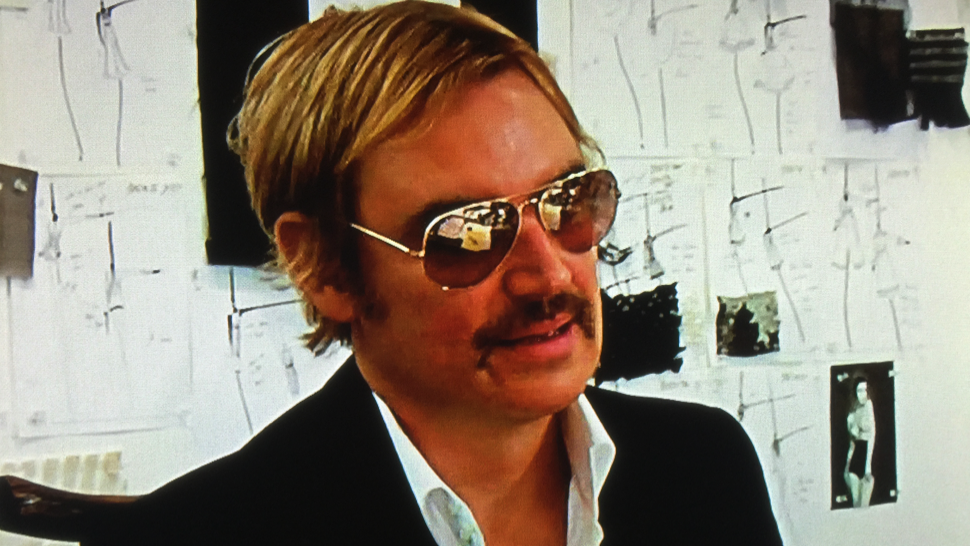 And this one is his “Oh, my interview subject just walked in, too bad, I was about to get down on this Chanel guitar” look: 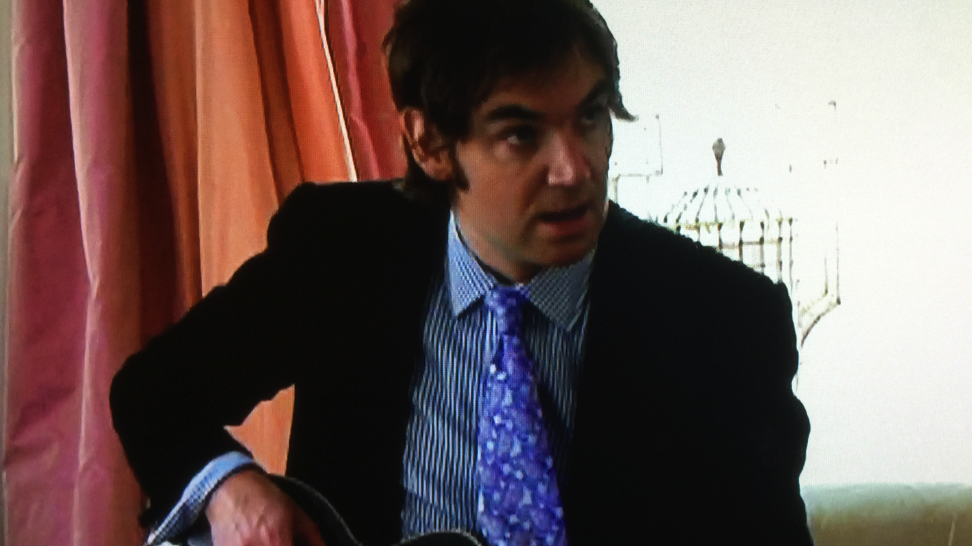 At one point in the movie, he started doing, like, hosting stuff at Fashion Week — doing man-on-the-street bullshit and openly gawking at Kelly Rowland as she walks by. But he doesn’t know who Kelly Rowland is. What this has to do with Halston, I will never know.

I have a lot of unanswered questions about this film. Questions like: “How did he get all these interviews? How is it shot so poorly yet the graphics look great? Why did he change his hair color for every interview? Who paid for this? Who told him this was good? Who edited this? How much did this cost? Why am I so fascinated by this?” In the end, my wife asked the best questions, which involved the opening credits: “Why does it have Tribeca Film Festival’s name on it? Why does it have American Express’s name on it? How did Patricia get this done?” And then she finished with, “I know it was Patricia who got this done.”

Oh Shit, That Was Way Too Long; Here Are the Top Five Things From Reality TV This Week

5. This Season of Shahs Looks Good: Shahs of Sunset has been underwhelming thus far, but this clip shows promise.

3. Married at First Sight: This show is still interesting. I know that no one is watching this, but you should be. This week, a woman went to Christmas at the family home of her new husband, whom she just met. Oh yeah, he’s Jewish. Telling you, this show is good.

1. You Should Stop Drinking. Want a Shot? On Southern Charm this week, there was a bit of an intervention when Shep told his drinking buddy Craig that he should stop drinking:

NOT SLEEPING FOR THREE DAYS? Are we sure we’re talking only about drinking? Shep later explained why he can give life lessons about drinking (and whatever else that isn’t mentioned) to Craig and still act a fool: because his family is rich.

The Call Is Coming From Inside of Skype: The Tech Terror of ‘Unfriended’

Songs of the Week: Thugs, Mitskis, Quarterbacks, Sturgills, and Lydias