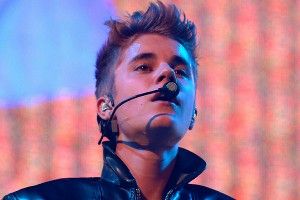 And for his latest bit of inspiration: Justin Bieber puked up milk onstage Saturday night in Arizona during his “Believe” tour, and yet never faltered in giving his fans the premier entertainment experience they’ve come to expect. He upchucked once during “Out of Town Girl,” as you can see below, and then ran off-stage again during “Beauty and a Beat.” And yet he came BACK. “It’s hard for me, you know, not feeling great and throwing up in front of a bunch of people,” he told his masses. “Will you love me even though I’m throwing up onstage?” Yes, his masses all instantly and simultaneously agreed, they would. Later, he would offer an aptly referential Twitter explanation: “Milk was a bad choice!” But in that moment, in that time, there were no excuses being made. There was just, in the face of great milk vomit, pure dancing-and-singing marvel. Amazing, yes? So go ahead. Believe.

666 Park Avenue vs. American Horror Story: To Rent or to Buy Your Housing Nightmare?