666 Park Avenue vs. American Horror Story: To Rent or to Buy Your Housing Nightmare? 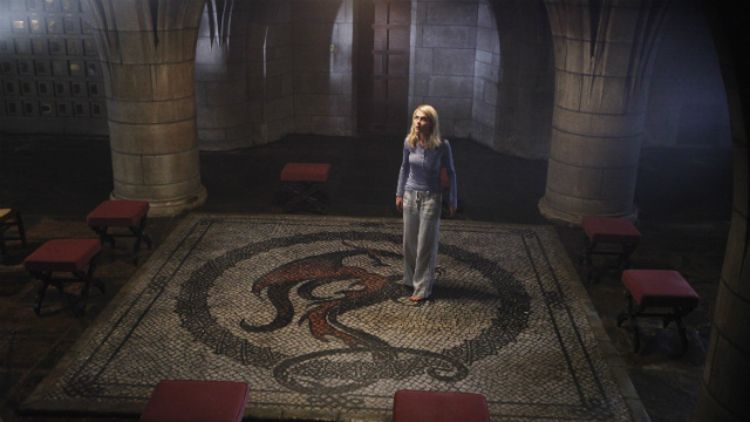 Which is smarter, to rent or to buy? You know what, screw it: Which is scarier?

Buying a house is freaky because of the symbolic permanence and the unknowns. Even if you drop three grand for inspections (general, mold, asbestos, foundation, sewer line, electrical, geographical, environmental, spiritual, astrological), there still exist a litany of nightmare scenarios that might happen between when you get the deed and when you pass it on to some other naive home-buyer, what-ifs that appear like mirages on page 70 of the escrow documents next to your initials. The roof could collapse, all of the antique doorknobs could fall off, and the maid you inherit with the property could be an undead shape-shifter; worst of all, you can’t call your landlord to exorcise the boogeymaids and patch the tiles. There’s also the question of time, the cumulative history of a property that may add up to a cursed 8,000-square-foot plot as well as your own future in it, a 30-year mortgage that buyers in an insecure housing market might not jump at the opportunity to take off your hands. There is a basement with blood stains on the floor or a neighbor whose ghostly children won’t stop creeping in your windows and corrupting your sulky teenage daughter. A giant Taco Bell might be erected outside your bedroom window, or you may be seduced by a man in a rubber suit who impregnates you with devil spawn. And still you owe the taxes. There is no one to complain to, no one to blame but yourself.

The overwhelming sensation of being in control of a situation that might become irreparably chaotic (the murderers lurking outside constantly dinging the doorbell, of course, but even more horrible is having to choose your own plumber when the toilet overflows and floods the basement on a Sunday) is not ideal, but neither is the renter’s servitude. You can’t adopt a dog. You can’t paint anything Baltic Gray. Your unit may be foreclosed upon, and you may not find out until months later. Or it may belong to Satan. There are rules, and there are hassles, but the benefit of renting is that you can always leave — of course, in the case of 666 Park Avenue, which premiered Sunday night on ABC, you may leave by getting sucked through a decorative tile on your apartment’s front door into the depths of hell, but at least you’re out of there. Perhaps this is why 666 Park Avenue is inherently less scary than Season 1 of American Horror Story: a lease is still a lease. The pilot of 666 Park Avenue borrows heavily from hoary scares like A Nightmare on Elm Street (creepy hand walls) and Rosemary’s Baby (disguised doors), but also from Shakespeare (futile scrubbing of hands to get rid of the blood — hot tip: Exfoliate). Apartment buildings are perfect settings for horror scenarios because, in theory at least, there is nothing scarier than living in close proximity to other people, some of whom have the key to your apartment and all of whom are either insane or attempting to hide their dark secrets from you when you bump into them in the laundry room. Often these dark secrets are in the laundry, but sometimes they’re the sort of secrets that have to do with spouses brought back from the dead who require the blood of the living to vampire another day on Earth before being thrust back into the underworld. What’s worse? I guess it depends on how your underpants look.

American Horror Story’s first season was anchored by the unhappy marriage between Vivien and Ben. Recovering from an affair and a miscarriage, they were not a pair that you would have wanted to have over for a beer. 666 Park’s Jane (Rachael Taylor) and Henry (Dave Annable) are the polar opposite of this, though you still wouldn’t want to have them over for a beer, because they are the kind of couple who laugh uproariously together in a car over nothing, take bubble baths à deux with 16,000 candles, and revel in each other’s lameness. No, she’s the clever one. No, he’s a doll. No, you. No, you. No, shut up. They aren’t married and have no children: Even their relationship is a rental. The holes in this pilot ($11 in the checking account, so who paid for 25 bucks’ worth of Illume pillars? Or the Dwell bedding?) don’t render it unenjoyable exactly, especially for those who relish the lacy Swiss of soap operas or a series featuring former John Locke (Terry O’Quinn) as a devil landlord (named “Gavin Duran,” such an obvious anagram for A Gravid Nun). AHS was unpredictable in its mildest moments, grotesque when it wanted to be, and sometimes profoundly melancholy. 666 Park so far is like a morbid chewing gum, all Off-Broadway-scribe-in-a-shawl-collar, unsettling trips to the driving range, and Pretty Woman dress-shopping excursions with the wife of the Antichrist (Vanessa Williams).

As the new co-managers of the fictional Drake apartments located at 999 Park Avenue (666 Park apparently exists, but the address does not look as creepy when illuminated from below to appear all upside-down and goobly), Jane can indulge her Nancy Drew tendencies to research hidden dragon mosaics and sleepwalk up to the roof, under the guise of performing maintenance, to watch the zombie wife of a fellow tenant plunge to her death all over again. When she and Henry sign a contract to cement their new position as employees with a swanky apartment provided gratis, Duran twinkles and the pen drops on the paper like a body hitting the floor. Perhaps this loophole trumps their tenants’ rights to vacate with proper notice at the first sign of an infectious bloody-hand infestation, but it sort of stretches the imagination that another renter whose recently deceased wife was corporeally reinstated after he committed dirty deeds as payment to Duran wouldn’t, you know, check out the properties in Clinton Hill or something. I’ve heard that the devil won’t take the G train.

The Harmons, residents of the American Horror Story house, were stuck there by virtue of a horrible conflation of the housing collapse, the psychological pull of the property, and the fact that it was haunted by the cutest evil teen evarrrrr. 666 Park residents Jane and Henry, like their neighbors Brian (Robert Buckley) and Louise (Mercedes Masöhn), are still in the period of infatuation with their new digs, during which they simply can’t believe their yuppie luck to have snatched up a sick pad above their means. Their ambitions are grander than their accomplishments (Brian is on page one of his play, Jane has recently been passed over for a job at an architectural firm), so at least initially, that might serve as enough glue to keep them stuck to their hardwood floors even when things get a little ooky. But what will keep them there when the spiders inevitably start pouring from the showerheads and the refrigerator opens to reveal a stack of canned fetuses? (OK, it’s network — maybe a stack of canned kittens instead?) It seems like cheating if you’re sentenced to an eternity in hell just for politely packing up after 60 days of dealing with a species of bedbugs evolved from the souls of unbaptized babies.

I guess the crux is that you need to become indebted to your evil landlord, and that’s what makes 666 Park the soapiest of all: It’s about sneaky Peeping Toms, kleptomaniacs, and needful things. In a rental, your business is never really your business, especially with neighbors side to side, up above and down below. In a house where only you have the key, you yell louder during fights, don weirder things during your darkened bathtub sex romps, and eat brains for dinner in a surreal bubble of privacy — there’s an insanity there, boarded up in your craziness with all of the ghosts who were boxed in there before you. You put the sofa in a place where you intend for it to stay, to gather Froot Loops in its skirt and accumulate the debris of your shame between its cushions. The walls were built thick in 1908 and nobody could hear you scream. Renting is much more polite, no matter who your landlord happens to be. There will be no funky organ suppers or horribly disfigured men digging graves in the yard. You have to be ready to pack up and go, even if you take the elevator down to the fiery depths. Though the Ansonia, where 666 Park is shot, is said to be haunted, the real horror is that the residents who aren’t staffed like Jane and Henry are paying upwards of $5,000 a month for a one-bedroom. And that’s before they auction off their souls.