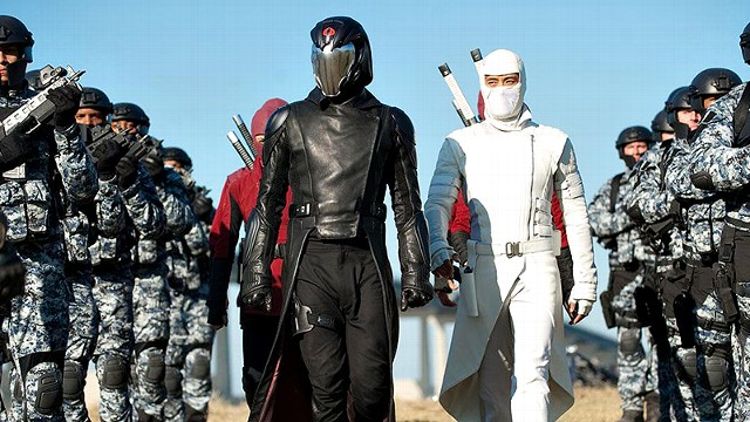 Did you think a second G.I. Joe movie was a good idea? It wasn’t simply that the first one — taken from action figures and an after-school cartoon series — was nap-inducing (although, at least in my seat, naps were had). G.I. Joe: The Rise of Cobra starred Marlon Wayans and Channing Tatum, cost $175 million to make, and was kind of the Huey Lewis and the News of hit blockbusters. It made more than $302 million globally, and yet it was hard to find anyone happy they stayed for the whole thing.

G.I. Joe: Retaliation was supposed to happen last summer but was pushed back until today. The stated reason was a lot of blah-blah-blah about an unfinished 3-D conversion. But it’s likely someone at Paramount noticed that in the three years since The Rise of Cobra, Tatum has turned from a pile of wood into a piece of popular furniture: He’s the star equivalent of IKEA’s Expedit bookshelf — basic, reliable, almost everywhere, and assembly still required.

His stardom explains why the first 20 or so minutes of Retaliation are pretty good and the 90 minutes that follow are not. It’s as if Tatum wasn’t supposed to be in this movie and was added to juice up a mess. Tatum’s still Duke, and Dwayne Johnson enters the series as Roadblock, and the movie seems to enjoy the bromantic comedy coursing between them. All they do is hang out and tease each other — inside the North Korean demilitarized zone, playing a video game at Roadblock’s apartment, somewhere in the Indus River Valley. Tatum mumbles some of his lines and throws the rest away. He’s not perfect: Reciting exposition still makes him sound sub-literate. But he and Johnson are good together, and around them the movie has a loose, enjoyably random rhythm. If the whole thing were edited as unpredictably as those opening minutes, this could be 21 Jump Street or a Bad Boys movie.

That Retaliation cares more about their chemistry than cheap-looking explosions and poorly staged shootouts implies that the director (Jon M. Chu) wants to distract us from the assembly-line chintz he has on his hands. And yet the movie suddenly and cynically focuses on a plot involving a kidnapped United States president (Jonathan Pryce); his evil impostor (Pryce again); the impostor’s pal, Cobra Commander (some dude in a mirror mask); and a scheme to see the planet go up in nuclear smoke. Meanwhile, Roadblock and some other Joes — including Flint (D.J. Cotrona), Lady Jaye (Adrianne Palicki), and the silent-but-deadly Snake Eyes (Ray Park) — destroy a lot of property and logic in the name of spoiling Cobra’s plan.

Half a world away, embarrassment awaits in a Shaolin-style temple in which a blind and grizzled RZA narrates martial-arts Joe training and a lethal conjure-woman demonstrates her skills at tissue reconstruction and wearing Toni Morrison’s hair. There is a lovely rappel-and-fight sequence set amid lots of cliffs and digital-seeming rock face. Some of the wonder of Crouching Tiger, Hidden Dragon exists in the aerials of these chases. But so does the urge to scream “Finish him!” as stuntmen are kicked or chopped to their deaths.

In Lady Jaye, Retaliation gives us a character who decries chauvinism but happily uses her booty and boobies to ensnare men. In Flint, it gives us an excruciating reminder of what an inanimate object Tatum used to be. In Roadblock, we’re given an example of how Johnson’s brand is diluted by his willingness to say yes to the first thing that puts him in a T-shirt and Kevlar. It’s great that he’s back doing movies (he’ll have had one a month by May). But at the moment, he’s more imposing when he’s on Monday Night Raw. He should be starring in Olympus Has Fallen and Gerard Butler should be heading this up — his macho-cheesiness would be perfect here. By the time Bruce Willis arrives as the original G.I. Joe and a military messiah whose war-arsenal PIN is “1-7-7-6,” we’re given self-congratulation that’s too brain-dead to know that it’s farce.

I know what you’re thinking: You just paid $6 to $12 to see the same nonsense last weekend. And you’re not wrong. Paramount is selling us a Channing Tatum–Dwayne Johnson blow-’em-up but delivering bootleg Olympus instead. Retaliation has fewer jawlines and worse American accents (the U.K.’s Ray Stevenson plays a villainous Southerner named Firefly; he’s like watching a Humvee audition for Steel Magnolias). The Joe movie makes even less ideological and circumstantial sense than Olympus. I mean, is staging a massive gun battle near two gentlemen carrying a warhead really a good idea?

But these movies (along with Roland Emmerich’s upcoming and delicious-looking work of disaster White House Down — with Jamie Foxx and, yes, Channing Tatum) do tap into this skepticism about homeland security and foreign policy in the Obama era. These movies aren’t about actual terrorism so much as they are fantasies about the consequences of a perceived lack of muscle in his leadership. It doesn’t matter that, more or less, he’s “the motherfucker who caught bin Laden” if he can’t defend his home.

In all three films, servicemen come to POTUS’s rescue. There’s no “get off my plane” moment for him. The White House assault movie has an extremist-libertarian appeal, too. If government is too big and too Big Brother–y for you, blowing some of it to smithereens is one way to shrink it. It’s true that a lack of feasible politics make Olympus Has Fallen and G.I. Joe: Retaliation laughable. But in making the president a distressed damsel, they suggest a fear that the White House is there for the enemy’s taking, even if that enemy started life as a Hasbro toy.

Khloe Kardashian and the Game's Alleged Love Child ... and Other Horror Stories From This Week's Tabloids