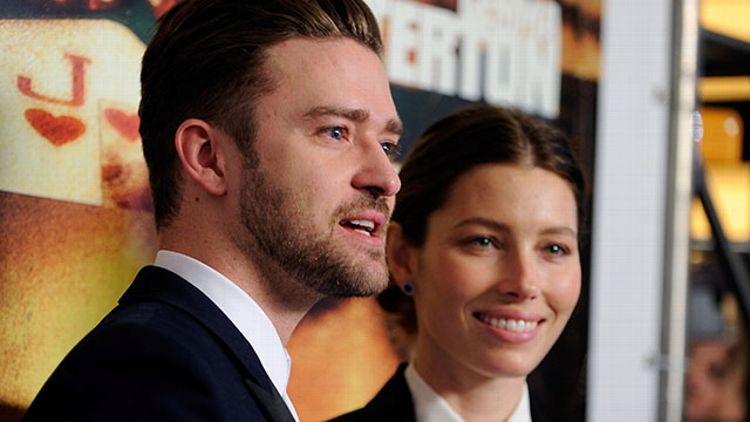 Justin Timberlake Cheating on Jessica Biel? Has JT “grown out of his womanizing ways” since marrying Jessica Biel? Timberlake was in Rio de Janeiro for the Rock in Rio festival, and “reports surfaced that the ‘Mirrors’ singer, 32, cheated on wife Jessica Biel after he was spotted kissing married Brazilian actress Thaila Ayala.” Hey at least they’re both married! (To other people.) “The gorgeous brunette, who wed actor Paulo Vilhena in 2011, added further speculation to the rumors after she posted an Instagram video of Justin performing at the festival with the caption, ‘A childhood dream — meet Justin and have him singing a song in front of you.'” Justin “laughed off the claims” but wife “Jessica, 31, wasn’t so easygoing. She flipped out. She’s afraid that Justin is incapable of controlling his impulses.” While Biel and Timberlake were dating, but not married, Timberlake was also rumored to have “had a three-day fling with actress Olivia Munn,” plus hookups with Mila Kunis and possibly ex Cameron Diaz. Timberlake is headed out on a world tour, which means Biel is on high alert. “Jess is really worried. She wants to believe that he’ll be faithful, but it’s hard to tune out all the chatter suggesting otherwise.”

Jennifer & Angelina: “All it took was one little word to turn Jennifer Aniston from America’s Sweetheart into every director’s nightmare: Angie! A set insider has informed Star that, while filming Squirrels to the Nuts in New York City this summer, Jen flipped out when she learned that the film’s other main character had the same first name as her archnemesis, Angelina Jolie. The original script had a role named Angie, and it infuriated Jen. She cringed whenever she heard it. Production was scheduled to start on a Monday, but Jen didn’t arrive until Wednesday because the scripts had to be revised first.” They changed the “Angie” character to “Izzy.” This story makes no sense, because presumably Aniston read the script several times before production started and would not have been surprised by it on set.

Nicki Minaj & Zac Efron: “When it comes to shocking celebrity hookups, Zac Efron and Nicki Minaj take the cake” NICKI NICKI NICKI and … ZAC EFRON? WHAT! I love it. “Nicki took Zac to her house in West Hollywood. She said he was the best lover she’s ever had.” Better than Gucci Mane? Just kidding, love you Nicki. “She thinks Zac is so sexy. She would have loved to have taken things further, but she knew he was going through a phase when they hooked up.”

Kristen Wiig Desperate for Baby! “Kristen Wiig made the leap from SNL actress to movie star, but she’s still dreaming … about having a baby! Insiders reveal that since her split from Strokes drummer Fabrizio Moretti, the 40-year-old Girl Most Likely actress will consider IVF or adoption if Mr. Right doesn’t show up by next year.” Ugh, leave Kristen Wiig alone! “Even with her red-hot career, there’s something missing — and that’s a baby. She’s not going to wait around for Prince Charming.” Orrrrrr she could hop a ride on Air Stamos.

Gordon Ramsay: “He tried to bake the biggest cupcake ever — but it collapsed!”

Make You Feel Some Type of Way: “Once Hollywood’s most explosive couple, Madonna — along with her grill — and ex-husband Sean Penn looked downright cozy while at the Gagosian Gallery for an art show.” Sigh … feelings.

Misc/Etc: “Newly blonde and very buxom mom Kim Kardashian” “pulled glum faces” “starting a new life as a lumberjack” “she’d wake up every day to boxes of couture” “indulged in a half million dollars of retail therapy!” “the former besties are quickly drifting apart” “mama-bear claws are out!” “that tweaking meth-head” “Dance-off!” “wrongly assumed that she would be inundated with free clothes and cosmetics” “After being immortalized” “Swift Selfies” “on a hog” “She pulled a Miley!” “the world’s longest picnic table” “used his teeth as a pocketbook” “Wonder how the two women feel about all this?” “There is chemistry between them” “She did at least five tequila shots with no chasers and couldn’t handle it. Then she proceeded to smoke a lot of pot.” “a lot when you’re talking about online cats”

Rebel Wilson: “When I came to America, I had two dreams. One, to have my own TV show; and two, to marry Channing Tatum.” One outta two ain’t bad.

Tina Fey on Motherhood: “You just want them to be a little fun weirdo for as long as possible. Don’t worry about being cool.” Then you can be a big fun weirdo.

Simon Cowell Doesn’t Want to See His Child’s Birth: Cowell plans to “eliminate himself from the delivery room” out of squeamishness. “I know this sounds awful, but it’s, like, you don’t want to go into the restaurant while they’re making your dinner.” You’re going to eat your child?! “There are certain things you shouldn’t see, and that is one of them.” I bet Gordon Ramsay could handle it.

Kate Upton’s Fall Workout Plan: Raking leaves! “Just be sure to switch hands halfway through” in order to “strengthen both sides equally.”

Liam Hemsworth Splits With Eiza Gonzalez: He’s already back on the prowl, and was spotted with a new girl in New York. “He’s 23. He’s not a playboy, but he’s going to go out and have fun.”

Misc/Etc: “She called herself a ‘rock'” “I have anxiety” “Samba on the high seas” “duck-call demos and a concert by Scotty McCreery” “take on the guys in beach sports” “You were a pest!” “I’ve always owned little white dogs” “I walk on my tiptoes all the time” “Cobalt! Sapphire! Azure!” “We just try not to make out on set” “It’s a reflection of how lazy I’ve felt” “Maybe I want my 25-year-old body, but I don’t want my 25-year-old mind” “Jon Hamm cradled a lion cub” “feted Hellmann’s mayo” “They were both looking for life partners, not a fling” “They’re three peas in a pod” “Secret Pain” “HOW DO YOU LIKE YOUR EGGS” “debating herringbone patterns”

Robert Pattinson & Dylan Penn: “Twenty-two-year-old Dylan Penn is a model and she looks the part: tall, lithe and blonde, with the full lips and the elegant cheekbones of her actress mother, Robin Wright — but not, so far as we know, the mercurial temperament of her father, Sean Penn.” She’s been spotted on several dates with Pattinson, at the Viper Room and the Chateau Marmont. “It’s a great match and Rob thinks she’s one of the most beautiful girls he’s ever seen. He couldn’t keep his hands off her that night, both at the Chateau Marmont and then later on at his house in L.A.” Is it serious? Maybe. “Rob isn’t tying himself down just yet” but he might end up doing it anyway. “He says there’s something about Dylan. She’s sexy as hell, clever, discreet, and completely charming. She’s also surprisingly down-to-earth, considering she comes from Hollywood royalty.”

Bruce Springsteen: “According to Bruce Springsteen’s guitarist (and The Sopranos alum) Steven Van Zandt, the Boss ‘has practically the same waist size as when I met him, when we were 15.'”

Rihanna: “‘Role Model’ is not a position or title that I have ever campaigned for, so chill wit dat! I just live … my life!!”

Olivia Munn: “My eyes started out brown and now they’re green, so that’s something.”

Misc/Etc: “That girl was a machine at one point” “ex-teen star who’s taken to bumping and grinding” “She worked as hard at getting her stomach flat and toned as someone who had a regular job.” “Within weeks, the fat cells die” “Miley’s got nothin’ on me!” “XTINA MARKS THE SPOT” “I need to make music” “She’s got the look of litigation in her eyes” “the singer stirred (surprise) controversy” “Jeremy Piven got a mustache fix” “A WHALE OF AN ANNIVERSARY” “The couple also swam in a tank with sharks” “Jazzy is the type to go through guys pretty fast, little bit of a maneater” “Miley and Taylor used to be really close, but they fell out over boys”

The Andy Greenwald Podcast: The Bridge Co-Showrunner Elwood Reid on the Challenges of the First Season