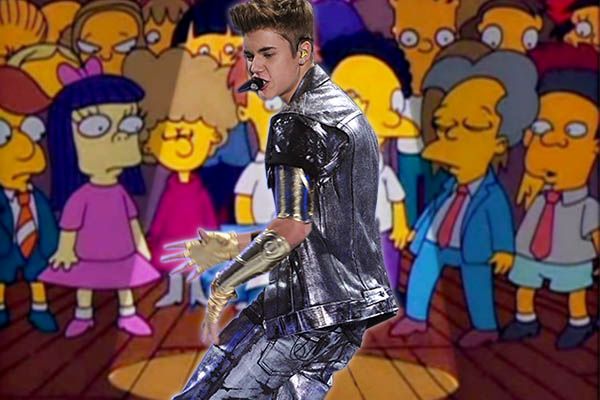 Big news in the world of mid-level to high-level cameo spots! First up: Justin Bieber continues his grand tour of every single conceivable corner of the pop-culture universe, having just taped a voice spot for The Simpsons. The news broke via that seminal fourth-estate institution, Justin Bieber’s Twitter: “just did a voice over for the SIMPSONS!!! #swaggy,” Bieber tweeted today, then deleted. Afterward, Simpsons executive producer Al Jean confirmed to EW that J.B. would indeed be stopping by Springfield for the show’s 24th season: “He tries to get into a talent show that Bart is playing piano in and they won’t admit him. Draw your own conclusions.” Also: “It’s a cameo, but all of his fans should watch every minute of the show, before and after he’s on.” That would be very #swaggy indeed!

Meanwhile, Chloe Sevigny has signed up for Portlandia‘s third season, playing Alexandra, Fred Armisen and Carrie Brownstein’s new roommate. No one’s leaked the script to me or anything, but I assume Fred and Carrie end up hating Alexandra for some radically petty reason about five minutes after she moves in? Can’t wait! By the way, Sevigny has laid fairly low since Big Love‘s run ended last year, although she did book a spot for the next season of American Horror Story, as someone named Shelly the Nymphomaniac, and she also recently spoke out in defense of Pussy Riot. Pretty damn #swaggy as well.

By the way, keeping in mind Matt Groening’s recent revelation that that Springfield is in Oregon, that means both of today’s cameo characters are heading to the Pacific Northwest’s most populous state. (Is it really? I have no idea. Good chance that it is, though?) Now, to complete the rule of three, we just need one more celebrity to join one more cultural property shot in Oregon. How about, say, Debra Messing? Have you any interest in, say, shooting a single-mother indie drama in beautiful Eugene? That would be, obviously, the #swagggiest.