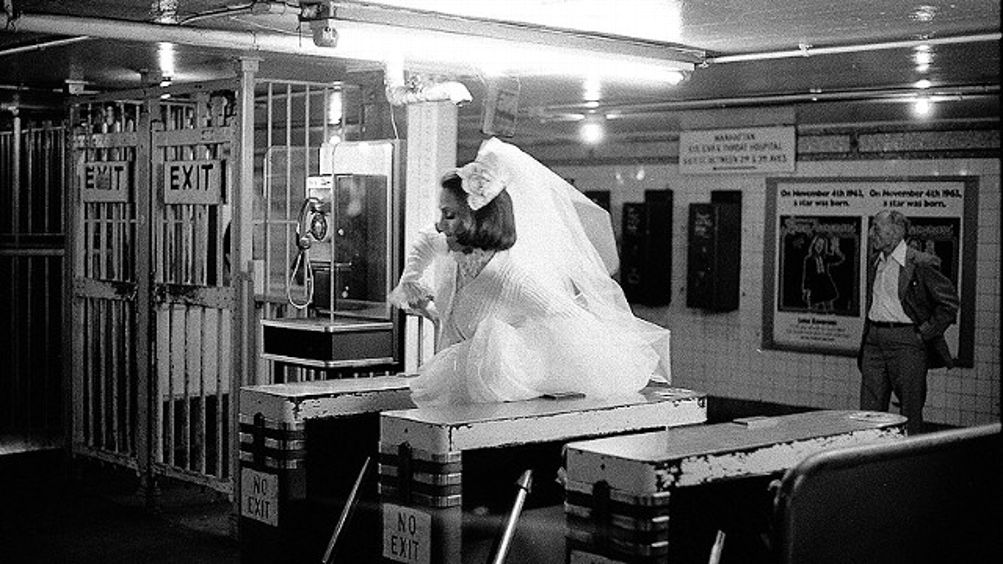 It’s election season, meaning it’s time to set out all the trappings of our modern meritocracy: the televised political debates; the misleading and mean campaign ads; the Maureen Dowd columns; and the wedding announcements in which a Democrat marries a (gasp!) Republican.

“It was like a movie where it happens in slow motion,” said bride Andrea Hailey of the moment it dawned on her that her boyfriend, David Williamson, hung to the right. “I was just like ‘Nooooooo … ‘ I was horrified. But I was in love with him. We were pretty far into our relationship at this point.”

Just as falling for someone can mean overlooking their paunch or getting used to their snores, it can also compel a person to not only tolerate, say, a family of “die-hard lifelong Republicans,” but even to love them. Really, the craziest part of the column actually isn’t the across-the-aisle walk-down-the-aisle. It’s that the words “I would fall asleep and wake up and she would be there” are used by the bride as a positive in describing her mother-in-law. (Also noteworthy is that “guests streamed out onto the lawn in front of the church as a string ensemble played a classical version of Beyoncé’s hit ‘Love on Top.'”)

While Williamson may be a Republican, perhaps it’s better that way: After all, another September groom authored a book called The Neglected Voter: White Men and the Democratic Dilemma, which doesn’t sound fun. (Hey, how come there’s no White History Month, ehh? EHH?) See what happens when you abandon the white men, Democrats? First they identify as Republicans, and then they steal your women.

Ultimately, though, Hailey’s decision to pull the reverse Mary Matalin had little to do with politics. It pretty much came down to this: “She liked their banter, and the way his shoulders bobbed up and down when a song by Jay-Z or Nas came on.” I think we can all agree to vote “YES” on this union.

Jay-Z or Nas themselves would probably get along well with another groom, Brett Augspurger, whose explanation of his social habits resulted in one of the great lines in “Vows” history:

“I roll deep,” said Mr. Augspurger, now 32, using hip-hop slang to explain how he found refuge in a group of friends who lived in and hung out at a big house in Berkeley, Calif.

No wonder the Democrats neglect the white men: They’re hella embarrassing. I can’t decide, though, what would be more humiliating: to have an article about your wedding in the New York Times that describes your exes in lurid detail (“one [was] a performance artist who took to the stage in diapers, another was a polyandrous zealot of Japanese comic books”)

to be this poor cat-loving groom. Every man, when he is a little boy, surely dreams that one day his wedding will be immortalized in the Paper of Record with an article whose first sentence is “Brian Mullen had long loved his cat, Sydney.”

Later we learn that Sydney was named after Jennifer Garner’s character in Alias and has her own Facebook page (“her activity is relegated to pokes and meows”) and that the bride’s friend “thought it was really weird, a guy with a cat” … but not before poor Brian is further humiliated by his own beloved:

On her first night in the city, Mr. Mullen sent her an e-mail asking if she had arrived, and he joined her and her friends at a restaurant. Ms. Laureano thought nothing of the meeting. “I didn’t think there was an obvious connection,” she said. “I was planning to return to San Francisco, and he was focused on working in New York. I even asked my girlfriends, and they were like, ‘Eh.'”

Amazing. I hope she wrote that heart-fluttering anecdote into their wedding ceremony, although it’s impossible to know: The only part of the sermon that the article mentions is the part where the priest mentions Sydney the cat.

Congratulations to Beth Reisfeld and Chris Lesch, who at just 25 years old are the winners of this month’s Society Scorecard (tabulated according to our proprietary NUPTIALS algorithm) and, more important, this month’s Chosen Couple.

The pair met at Yale, have families who used to be next-door neighbors in Brooklyn, and are “training for a career in Jewish education” and about “to become a Fulbright fellow at Hebrew University in Jerusalem,” respectively. This wedding was so holy that it required two rabbis — although only one of them was named Shlomo. Mazel tov, you bright young things.

In other matrimonial matters this past month …

For all the opposites who attract, there are umpteen others who gravitate to like-minded souls. One of the nice things about the September weddings was how many of them featured couples who met while pursuing their deeply held interests.

This month featured opera singers and instrument players; there was a pair of marine biologists and a backpacking couple who get their rocks off talking about rocks. (So it is, too, for this pair, for whom a conversation about sidewalks is like foreplay.)

Two law clerks met while playing pub trivia. These two undoubtedly bond over their Fulbrights. There were people who met playing rugby — I love the team name “Worcester Men” — and those who “became friendly during grueling team practices” for the Oxford boxing club.

I just love the implication of all these duos. Don’t mortgage your house for a matchmaker; no need to pretend to be someone you’re not. Just surround yourself with things you love doing, and you’re bound to meet people you’ll love doing too.