Justified Season 5, Episode 1: Everything After Augustine in ‘A Murder of Crowes’ 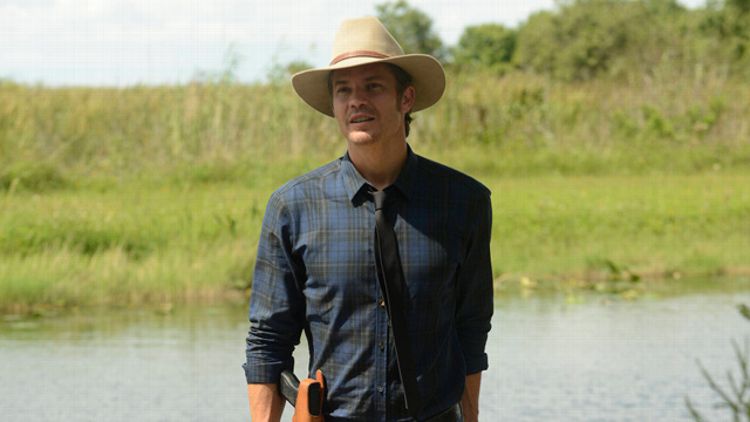 Justified’s fifth season premieres with “A Murder of Crowes” (get it? Get it??), an hour of television that serves as a Great Muppet Caper opening number of sorts — myriad promises layered atop one another, starring just about everybody on the show who’s not dead yet. There’s no slow-building crescendo to a kick line, but it wouldn’t be that out of place. This makes for a more packed episode cast than you maybe might imagine, despite the series’s reliably prolific body count. Returning for varying lengths of time, apart from the usual suspects and freshly promoted series regular Jere Burns as Wynn Duffy:

Being a season premiere, the episode calls for a fair amount of expositional busywork, doled out among several characters to share. Most of it’s spent spanning the time between the Season 4 finale and now: We learn from Dewey’s lawyer that local inmates have been grousing about Raylan’s law-enforcing methods; from Art that Winona and the baby, which exists now, are living in Florida; from Dewey that he bought Audrey’s from Boyd. And then there’s the drawstring that cinches this episode right up to the show’s pilot episode, “Fire in the Hole”: Raylan explaining to Sutter, and reminding us, that he sent a Crowe cousin to prison for poaching, an arrest he discusses with Dewey in the pilot during an encounter in which he introduces Dewey’s face to a steering wheel, an incident brought up in this episode’s opening courtroom scene. (That guy’s name, according to the pilot, is Dale, not Daryl; this is seemingly an elision of the sort the show did earlier with Carla Gugino’s Karen Sisco-Goodall. )

The episode backtracks all the way to the show’s pilot at points, filling out the universe we already know, while expanding it geographically as far north as Detroit and south to Miami. “A Murder of Crowes” jumps constantly, by design and necessity, skipping rocks and baiting hooks (with large birds, for alligators) to set up story lines we can see coming and ones we can’t. But Justified has earned our patience at this point, and the trust that most of this will end up being important later.

What’s Raylan Up To?

On the wrong end of a Dewey-led lawsuit before the opening credits even roll, and after shooting Dewey’s aboveground pool (sounds satisfying, but he doesn’t even smirk walking away), Raylan is dispatched to Miami, scene of several exploits of seasons past, to investigate a missing Coast Guard agent who was under investigation by the FBI. With his Grant-assigned chaperone, Deputy Marshal Sutter (David Koechner!), Raylan lights out for Crowe country, and in short order, we meet the Florida clan: Daryl (Michael Rapaport), Danny, Dilly (who shot the Coast Guard agent), and Wendy (Alicia Witt). We’re also treated to what is somehow Justified’s first-ever airboating scene. Daryl, Danny, and Wendy make it out of the episode alive; Dilly dies by Danny’s hand, and Elvis Manuel Machado, the federal fugitive Raylan was dispatched to recover, is shot by Raylan and Sutter while trying to escape a marina in a rubber boat, which both closes a case and gives Raylan the second opportunity in the space of one hour of television to fire bullets into something inflatable. The episode ends in a familial embrace that’s both warm, compared with last season’s waning minutes of Raylan reluctantly reflecting on Arlo, and cold, experienced entirely through a video screen as he chats late into the night with Winona and the baby. Raylan says she was funny-looking when she was born. Who believes that?

Ava still hasn’t been sprung from that Delroy situation, and her time in prision has sapped her glow. Boyd, wearing Ava’s engagement ring on his watch chain, is juggling freeing her by whatever increasingly desperate means he’s able with managing his end of the heroin partnership he struck up with Duffy last season. This bit of business takes the improbably haired pair to a series of sets with blue-gray filters labeled “Detroit,” where down a theatrically dilapidated hallway the two are reunited with Sammy Tonin and Mr. Picker, discovering that Robert Quarles wasn’t the only Tonin son with bad, bad predilections too gruesome for cable. We also learn that Dave Foley and Will Sasso make more convincing career felons than does Rapaport. Just marinate on that for a minute. Boyd, faced with a dilemma you’d find in a shitty meme on Crimelord Facebook (the judge he wants to threaten to get Ava released from prison doesn’t have a family!) pistol-whips judge-pal Lee Paxton in a fit of misery and real stupidity.

Straight and shocky with Ava in prison — purposeful, even. On his driver’s license, shorter and fluffier, a callback to simpler, more carefree times. Overshadowed in the Michigan scenes by Duffy’s Heat Miser–inspired coif.

Accounted for: Ava (prison), Winona (Miami). Introducing: Wendy Crowe, who represents herself as a lawyer, calls herself a paralegal, but is, in fact, a legal secretary who knows how to get herself broadsided out of an awkward situation; and Mara Paxton, the imported wife of a self-styled Kentucky aristocrat who might actually care for her husband.

1. “Oh, well, I have been to Iraq. It’s a lot like Detroit, except you have better music.” — Boyd Crowder, to Tonin’s guards

2. “Now all he’s remembered for is doughnuts.” “That, and dying in a police chase on the QEW.” — The Canadians

3. “She was a doctor. In Latvia.” — Paxton, lobbing the adult version of “You don’t know my girlfriend, she goes to another school.”

4. “Can you believe you made something so cute?” — Winona, who has clearly never examined Raylan’s cheekbones, wielding Raylan’s daughter

5. “I trust nobody who speaks English as a second language.” — Daryl, in no recognizable human dialect

The immediate return of Tim and Rachel; that Wendy turns out to be the Big Bad of the Crowes; that the death of so many Detroit mob executives will lead, however eventually, to future appearances by Adam Arkin’s Theo Tonin.

How many tries did it make, and what equipment was used, to make the shot-up pool fountain out so theatrically? Did Duffy, still evidently a women’s tennis enthusiast, ever use Victoria Azarenka matches to drown out the noises made by Quarles’s victims? Did Raylan just leave the Heat onesie on the doorstep for the baby? Did producers select Rapaport for what is presumptively a central villain role based on his headshot, or for his finely honed Pensive Airboating Face, because it sure as hell wasn’t his accent? Is Rapaport’s accent in fact a self-contained piece of performance art, made intentionally unnavigable to represent the labyrinth of the Everglades? How did it take four complete seasons and half another episode to get an airboating scene on this show? How hard is it to flip an airboat?

R.I.P., Soapnet: The Death of the Network Where Every Soap Went to Die