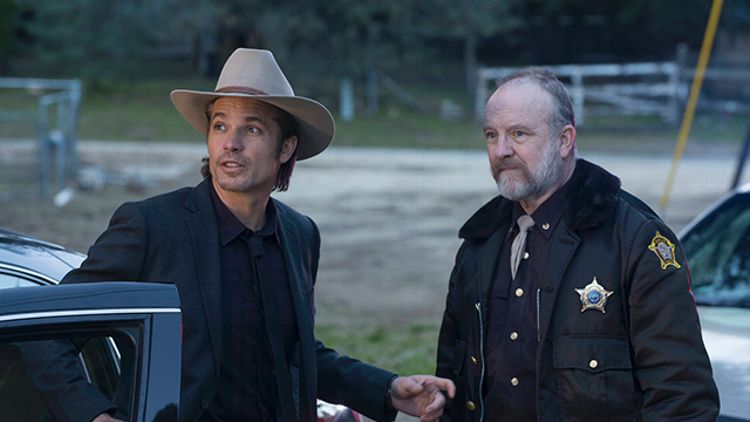 So when did you know?

Perceptive commenters all over the Internet have been guessing that Sheriff Shelby was Drew Thompson for a while now, and they won me over to their point of view a couple of weeks ago, so much so that I found myself actively hoping the show was going to swerve and reveal the seemingly obvious Shelby foreshadowing was an elaborate red herring to keep viewers off the track. But last week’s episode just ladled on the “Shelby is Drew” hinting — what with that whole conversation between him and Ellen May about how if you wear somebody else’s clothes for long enough, you just might become somebody else — and this week’s seemed to all but confirm it, with Shelby insinuating himself into every bit of Drew business yet again. And then he got into the back of the car with Hunter and had a conversation with him that confirmed Shelby was Drew. (To be honest, the fact that the show brought back Brent Sexton’s first-season sheriff character should’ve been another big hint, though I didn’t cotton to that one.)

Now, I don’t know if I would have guessed this without the help of the Internet’s many commenters. I like to think I’m an astute TV viewer who picks up on obvious hints and that last week’s episode would have tipped off even me. But I definitely needed help to figure this one out, at least initially. So it wasn’t as obvious as that one time Dexter turned Edward James Olmos into a friendly ghost and everybody figured it out in Episode 2 or 3. But it was still one of those things where if you were watching and/or following the conversation surrounding the show, you probably figured it out at least last week, if not earlier. I talked to Graham Yost earlier this week for a piece I’m working on for another site, and he sounded mildly deflated at the thought that people had guessed who Drew was. I don’t blame him.

Now, this isn’t really Justified’s fault. Every show on television has to cope with the fact that it’s going to be discussed by some community of people somewhere, so coming up with a twist that would truly throw people becomes remarkably difficult. Either enough of your viewership guesses the twist beforehand — particularly in a situation where the season is entirely built around some sort of “Who is this mystery man?” question — or you come up with something so nonsensical and off the wall that nobody could have predicted it, and everything feels vaguely ridiculous once that twist is revealed. (I liked Lost, but the ultimate revelation of what the Sideways Universe was in its final season falls vaguely into this category, though I still enjoyed the bulk of that season.) Most of you might have guessed a few weeks ago that Shelby was Drew Thompson, but Justified revealed it with four episodes left, so that isn’t the ultimate point of the season. If you’re going to have an easily guessed twist, this is probably the ideal way to deploy it. But it’s still fun to be outfoxed by a show, even if the nature of the Internet makes that increasingly unlikely.

It’s the fact that this comes in Episode 9 of 13 that makes this all work as well as it could. What’s more, the show finds a way to have Drew escape, while Raylan and Boyd both figure out who Drew was. Raylan figures it out when Constable Bob unleashes yet another bit of Harlan lore, while Boyd figures it out when he goes over to Shelby’s house to see if Ellen May is there (as he’s just learned, Colt didn’t really kill the poor woman) then happens upon a huge collection of federal law-enforcement officials. The episode builds really well to these revelations, and by the time Walton Goggins is shaking his head, chuckling, and saying, “Drew Goddamn Thompson,” I was largely past my disappointment at the show going the direction I thought it would. Plus, the episode closed with a beautiful little moment where Raylan talked with Hunter about the death of his father, and about the farewell Raylan must have wished he’d had with his dad on some level, reminding us just how good Timothy Olyphant is in this role.

With the chickens coming home to roost in the Drew story line, the episode brings most of its other orbiting story lines in for something like a landing. Seasons of Justified always have a bit too much going on — it’s one of the show’s charms, to be honest — so I can’t say that I’m as engaged in Tim’s attempts to figure out who killed Mark, but this is often a show that plays much better on the scene-by-scene level than when you pull back and try to think about its larger narrative. This sounds like a complaint, but it’s not meant as one. Justified excels at building memorable, indelible moments, and Tim coming upon Colt as he’s in the midst of potentially ending Cassie’s life is a great one. The season has been teasing the idea that both Tim and Rachel could turn into Raylan down the road, and this is another test of Tim’s ability to keep his emotions in check, one he passes admirably.

But the return of Cassie also illustrates how any given season of Justified starts to drift apart if you think about it too much. Remember when the snake handlers seemed like they’d be a big deal, and then Billy was written out via a shocking death in Episode 3? That was a great moment, but it also underlined just how little bearing that plot had on anything else. Granted, Justified is much more a show about momentary pleasures, and we got some nice Boyd Crowder character development out of that story line. And this season has been much better about keeping everything vaguely attached to one of the two main story lines than Season 3 was. But it can occasionally feel as if there’s no strong thread uniting it all.

Or, rather, it might feel that way if it weren’t for the various thematic throughlines holding this together. Take, for instance, the idea of what any given person might leave behind for future generations, an idea that unites the soon-to-be-a-father Raylan and the wants-to-be-a-father-someday Boyd in very interesting ways, and an idea that also guides the behavior of Drew Thompson 30 years ago, when he made a desperate bid to win safety in his own future. And there’s also the idea of people putting on those disguises and finding that they start to like wearing the new clothes. Would the old Drew Thompson have ever dreamed of becoming sheriff? Yet now he is one, and if it hadn’t been for the resurfacing of that old bag in Arlo’s wall, he might have happily continued as such for some time. There are also ideas of power and control here, of people trying to seize whatever small amount of such things that they can, then trying to expand that, as well.

More than anything else, though, Justified is operating on the same underlying theme it always has: The past is never gone, and ain’t it a son of a bitch? Raylan’s father might be gone, but he’ll be marked by Arlo for the rest of his life. Boyd hopes to overcome the pernicious past that hangs over his own name. Drew tries to outrun his past but finds he can’t ever put it in the rear-view mirror like he might have hoped to. This episode is filled with ancient tales of Harlan feuds gone wrong, of Raylan’s mother organizing a truce after other men diminish her honor and Arlo tries to stand up for her. One of those tales is what leads Raylan to realize who Drew was all along. These stories of Harlan past have always been with the show, but they’ve rarely seemed to inform the show as much as they do now. In unearthing a mystery from 30 years ago, Raylan hasn’t just found Drew Thompson; he’s found a pile of knots, and untying one just leads to 50 others.

Todd VanDerWerff is the TV editor of The A.V. Club. His writing has also appeared at Hitfix.com, the Los Angeles Times, and the House Next Door.