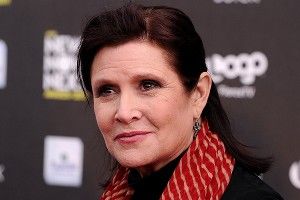 Star Wars: Episode VII is definitely happening. Am I the only one who needs to keep repeating that to myself, as if to convince myself it’s actually true and not some wild game of Hollywood Mad Libs where J.J. Abrams and Luke Skywalker and the screenwriter of Little Miss Sunshine were randomly put together? Well, it is. It’s happening. So much so that the stars of the original trilogy are now confirming their participation. Carrie Fisher confirmed to Palm Beach Illustrated (see what I mean about Mad Libs?) that she will indeed be reprising her role as Princess Leia, former intergalactic revolutionary, now presumably wifed-up to Han Solo.

How does the famously acerbic Fisher envision what Leia would be like today?

Elderly. She’s in an intergalactic old folks’ home [laughs]. I just think she would be just like she was before, only slower and less inclined to be up for the big battle.

So that puts Fisher and Mark Hamill both on track to return, meaning the only big names yet to officially confirm are Harrison Ford as Han Solo and Michael Carter as Bib Fortuna. (Hear me out! Bib survived the bloodbath on Jabba’s party boat and secretly began devising an elaborate revenge scheme against the Jedi. I’m still working out how the Trade Federation fits into all this, so check back later …)