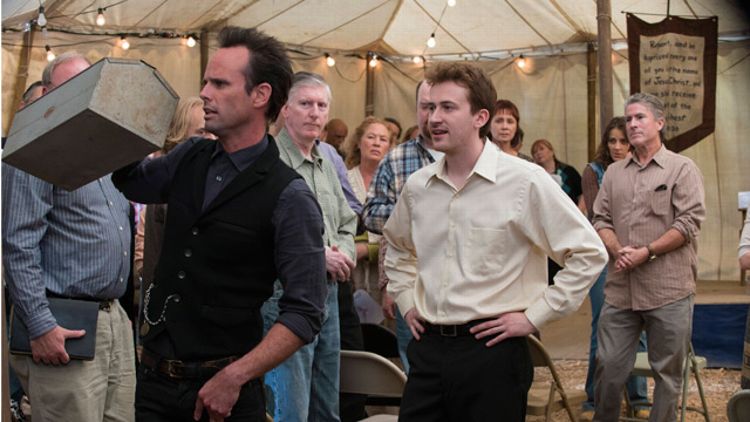 Among the many things I like about Justified is the fact that the vast majority of its characters are allowed to be at least a little bit smart. Too many TV shows turn their characters into people who just do whatever the plot demands of them, and that, of course, can get boring and erode the suspension of disbelief. On Justified, even a seemingly spacey woman who claims to have a touch of the ESP is clever enough to facilitate her own rescue by sending someone working with her captors to the back alley of a boxing gym where Raylan Givens just happens to be, so that he might realize that the FBI agent who claims to have taken over the Drew Thompson case for the marshal service is actually working for a very different boss. (Detroit mobster Theo Tonin, it would seem.) People are intelligent on Justified; that might up the game for the writers who need to put them in believable scrapes, but it makes the show that much more fun to watch.

Well, actually, let’s not speak so highly of good old Raylan, whose new girlfriend confesses to once having been a con-artist/thief, working in a team with her former husband, and that somehow doesn’t raise alarm bells in the marshal’s brain. Sure enough, by episode’s end, both Lindsey and Randall have lit off for parts unknown (or, actually, most likely Florida), and they’ve taken a fair amount of Raylan’s stuff with them. Raylan has rarely been this naïve before, but he’s also been a frequent sucker for a pretty face. Couple Lindsey’s possession of same with his excitement at the prospect of fighting Randall, and you have what amounts to a perfect storm of criminals poking at Raylan’s weak points. He’s not dumb; he just has his weaknesses, and if you get to know him, well, they’re really easy to find.

If Boyd Crowder has a weak spot, it probably has something to do with how much trust he puts in his inner circle. (We’ll get to that and Wynn Duffy — whose appearance I was sadly remiss in mentioning last week — in a moment.) At the same time, it’s easy to believe that this wouldn’t be as much of a weakness as it initially seems to be, thanks to Boyd’s great ability to read people. It turns out that he was right when he pegged Billy’s sister, Cassie, as the real brains behind the snake-handling church operation, and an early scene in the episode offers a vastly enjoyable battle of wits between the two. Follow that up with Boyd sending two of his men — including Ron Eldard’s Colton, another character whose presence I’ve neglected to mention so far — to the church to get into a truly horrifying snake attack, and it looks like things are ramping up for some sort of all-out battle between the opposing sides.

Instead, something curious happens. While Johnny is off trying to close a deal with Wynn (a deal Wynn is smart to question, given that Boyd very well could’ve put his cousin up to this), a local doctor brought in to cure Boyd’s man of his many snakebites remarks that while he’d like to bring the kid to the hospital, he’s amazed he survived this long. That many bites should’ve resulted in far more poison coursing through the kid’s system, which means that either he’s some sort of mutant, or that the snakes aren’t as poisonous as Billy lets on. Boyd, figuring it’s the latter, brings an unmilked rattler down to the church to see if Billy’s brave enough to still handle it. It turns out Billy’s more of a dupe than anyone would have thought, completely unaware his sister’s been making sure the snakes aren’t dangerous to handle.

Boyd pushes and pushes, until Cassie admits the snakes are less poisonous than they seem. But the strike is too much for Billy’s ego; he may claim to preach the word of the Lord, but he’s really in this to glorify himself, says Boyd. Billy picks up the snake, either because he’s got that ego or because he’s a true believer who really thinks no harm will come to him. Everything seems OK for a while, but it ends about as well as it would if you picked up a deadly snake and held it high in front of a giant crowd. Billy’s bitten, and he goes down. Boyd walks away, but there’s a flicker of conscience in his eyes. He does bad things, of course, but I don’t think Boyd’s fundamentally a bad person: He has a sense of right and wrong, after all, and also a sense of himself as being born into a great line of people who end up on the wrong side of the ledger. But he’s always seemed to me a man who also has a weirdly tuned morality, and in the latter moments of this episode — when he very well may have killed Billy — his troubled face indicates he may have overstepped his own boundaries.

This episode is full of reversals like that, of characters who seem to be one thing but are revealed to be another, or hazards that don’t seem hazardous until closer inspection. I’ll freely admit that, as much as I like the character, I’m not sure how Wynn’s going to fit into this season just yet, outside of his usual position as an interloper getting in the way of Boyd and Raylan’s operations. (Even as last season’s Quarles arc got a little too convoluted for me, I really did like the way it made use of Wynn, so this season could end up paling in comparison.) And there’s every chance that raising the possibility of somebody selling out Boyd — particularly Johnny, who’s had reason to turn on him for years now — could become just another take on a story the show’s done a number of times before. Yet there’s something there that connects this story to the other two — the seemingly harmless Johnny taking a chance and stepping out on his own, trying to find his way to something other than having to work for the man who reduced him to using a wheelchair or cane. Just like those rattlesnakes or that FBI agent, he’s someone who seems to behave in one superficial fashion but hides surprising depths.

The scene between Raylan and the FBI agent and the one between Boyd and Billy were my favorites of the episode — and any given Justified episode qualifies for that old “great movie” argument of having three great scenes and no bad ones — but I’m also remarkably fond of the bit where Raylan meets up with Rachel at the little bar he lives above to talk around the dissolution of her marriage. If there’s a consistent complaint to be made about Justified, it’s the way the show uses Rachel and Tim, who are ties to a time when it was more of a case-of-the-week show, and who haven’t managed the series’ evolution as handily as the character of Art has. Yet by giving Rachel a personal trauma that’s causing her to act more like Raylan, the writers are carefully pulling her into the series’ main orbit, and it’s fun to watch Raylan struggle to think of something to tell her. He knows he probably should say it’s not worth it, and to watch out for herself. But dammit if anything he says along those lines will make him sound like a hypocrite; after all, as Rachel puts it, he’s the guy smarting about not getting to fight Randall behind the bleachers after school.

Which, of course, opens Raylan up to being robbed. If Justified is a series about smart characters, then this was an episode about testing the limits of that intelligence, of discovering the blind spots that they didn’t even recognize they had. Only Boyd seems to emerge from this unscathed, although he has a potential mutiny on his hands and what looks to be an uneasy heart. (Being clever is one thing. Outsmarting everybody around you is another.) Everybody has a weakness, whether it’s a tough guy offering up a fight, or a long-dead husband, or a conscience that just won’t shut up. The only way to get past those weaknesses is to plow forward, which, ironically, makes you all the more susceptible to them, as Justified‘s players are quick to find out.

Todd VanDerWerff (@tvoti) is the TV editor of The A.V. Club. His writing has also appeared at Hitfix, the Los Angeles Times, and The House Next Door.