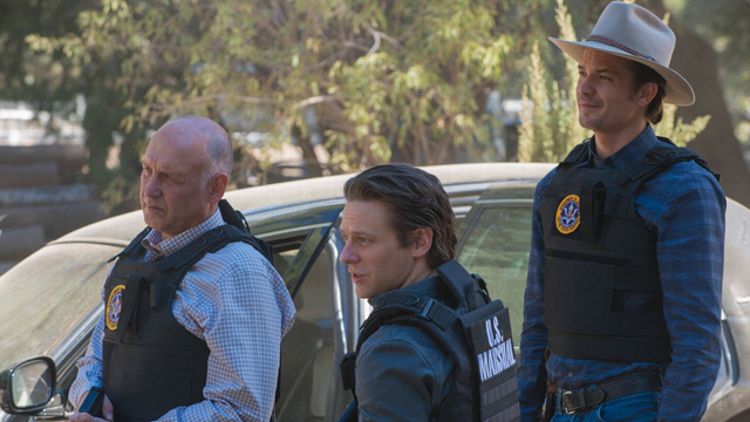 One of the best things about Justified is that it takes ideas of redemption, salvation, and faith at least somewhat seriously. It’s hard to say that Raylan Givens believes in much of anything, but the people around him are committed to various ideals of firebrand Christianity, of the sort that remains popular throughout pockets of the Midwest and South. Television shies away from religion — scared of offending people by endorsing it too heavily or seeming to mock it — and it’s not as though religious ideas are the only things going on in Justified’s head, but it’s nice to see them there, and to be reminded that these are people who are concerned with the state of their everlasting souls, even as they keep slipping back into their very human failings. In Boyd Crowder’s story line for the season, at least so far, the show is directly pitting these two things against each other.

Boyd, of course, had his own brief foray into the world of Pentecostalism, and the way he speaks still has a lot of old-school preacher in it. His cadence is the sort you might stumble upon while driving down a dirt road in the middle of nowhere and endlessly scanning whatever AM radio stations you can pick up. What he’s saying might horrify or repulse you, but the way he’s saying it can be intoxicating. Walton Goggins has always played Boyd as someone who’s at once the most attractive and the most dangerous man in the room, the guy who everybody wants to be around because he seems like so much fun, at least until that fun boils over and you’re in a world of hurt. It’s fitting, then, that after vanquishing seemingly every criminal in Harlan County last season, Boyd would face off against someone able to put a dent in his bottom line by coming at things from exactly the opposite position.

The best scene in this episode — and one of the best Justified scenes ever — involves Boyd going to the snake-handling church to test its weaknesses. His theory, advanced to Sheriff Shelby (the always-welcome-to-return Jim Beaver), is that the church puts down its tent stakes in a community just long enough to turn enough junkies and prostitutes to Jesus, thus squeezing the local criminal element and eventually forcing it into a hefty payout. It’s a solid theory, which sends Boyd to the tent for the aforementioned awesome scene. He confronts Billy, played by the wholesomely slippery Joseph Mazzello, and the two toss Bible passages back and forth. Boyd’s inner preacher comes out here, as he tries to sway the congregation away from a man he’s accusing of being a fly-by-night huckster. To counter that, Billy agrees that times are tough, so he’s not going to be sending around the offering plates for the foreseeable future.

It seems like a setback for Boyd, but what works so well here is that the scene takes on an added dimension on a rewatch, after you’ve seen the subsequent one where Boyd says Billy’s sister is the mastermind behind everything, the person who’s trying to gut his enterprises. Watching the scene again, all of those quick shots of the sister, intercut with Boyd wandering the crowd, take on new meaning. Boyd’s on a fishing expedition here; with every word, he’s probing not just Billy, but the entire crowd, trying to figure out the weak links present and ascertain the real problem. What makes Boyd a great character is the way he uses his ostentatious, showboating nature to hide his very real and cunning intelligence. Boyd didn’t get where he is simply because he’s unpredictable; he’s unpredictable because he knows that will get him the most knowledge about any given situation. People react differently when pushed off guard, and he uses that to his advantage.

There’s a connection here with the way Raylan conducts himself. I’ve sometimes heard viewers of this show say that they almost wish Raylan and Boyd could be friends, but I think wishing the two were closer is actually just a way of responding to the fact that they’re both so similar. Boyd probably has more raw intelligence than Raylan, but the two of them are both very good at rattling cages to see what happens, and at keeping their cool when everything starts to go to hell. The difference is that Boyd does this on an intellectual level, as if he’s conducting an experiment to get to the bottom of things; Raylan does it on an instinctual, emotional level, hence his reputation as a hothead who relies too heavily on his ability to draw quickly. We’re so conditioned to seeing shows where the central partners feature one coolly analytic player and one emotionally invested player that our TV-watching instincts want us to see Raylan and Boyd working together, not at odds.

That extends to the pair’s story lines in this episode. While Boyd is trying to figure out what the snake handlers are doing, Raylan and the other marshals are going in search of Waldo Truth, the name on the ID found in the Panamanian diplomatic bag (a phrase that never gets old coming from Nick Searcy’s mouth) that had been stowed in Arlo’s wall. Raylan doesn’t have to work as hard to get to the bottom of what’s happened to the patriarch of the Truth family — he has help, and a man claiming to be Waldo Truth wanders in after a bit — but his casually self-assured nature delivers him from what could be a dangerous situation (the house is packed with guns) with the answers he seeks: Waldo Truth disappeared with an airplane pilot named Drew 30 years ago, and his wife hasn’t seen him since. The new “Waldo Truth” is just a man impersonating the original, and now that Art knows this, he knows enough to figure out that the man who died surrounded by cocaine on that suburban street in last week’s episode was the real Waldo. Drew escaped with whatever was in the bag that ended up in Arlo’s wall, and Art’s been carrying that mystery around in the back of his head ever since. And now that he has a handful of pieces, you know he’s going to find the others.

I was going to say Art’s one of my favorite characters on Justified, but that’s not really true, since everybody on Justified is one of my favorite characters on Justified. But the way that Searcy plays Art with a hound dog’s demeanor is often ridiculously entertaining. He gets most of the good lines in this episode — particularly that one about how the mystery bag is giving him a “marshal stiffy” — and his little speech describing the three marshals in his office to the guy who wants his job (clearly a sop to anybody who might need some exposition after joining Justified at this late date) is similarly world-weary. Art doesn’t yet know why Raylan is constantly late to work and early to leave, but he’s closing in, and that reinforces another thing that makes him such a great character: He’s a different kind of antagonist, one who wants the best for Raylan, but who also knows that helpful impulse is directly in opposition to whatever Raylan wants in that moment.

All of which brings us to a local shit-kicker who pops in throughout the episode, usually to beat the ass of somebody who’s in his way, whether that’s in the ring or post-brawl, when the people who bet against him are trying to get back the money they lost. My natural instinct was that this guy had something to do with Waldo Truth, since that seems to be the season’s main thrust. Instead, he disappears from the episode right at the moment he’s made himself known as dangerous, and we forget about him until he drops by the bar Raylan’s living above, just as Raylan’s about to make time with Lindsey. Oh, and Lindsey? She’s the shit-kicker’s wife, and our hero’s backed himself into yet another fiery situation he’ll desperately need that cool to escape.