Justified Season 4, Episode 12: Anything for a Little ‘Peace of Mind’ 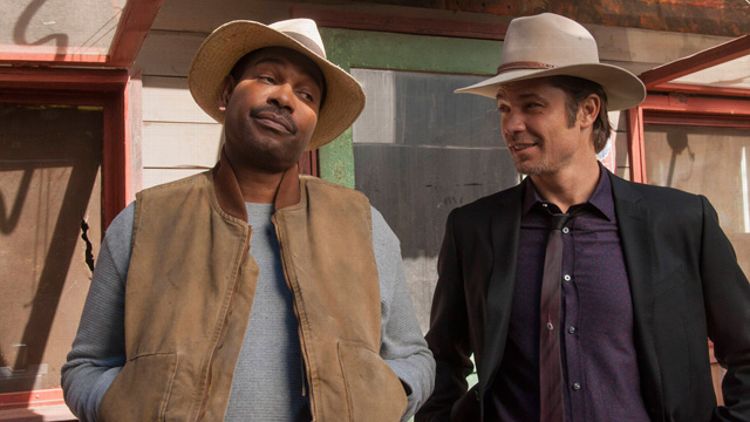 OK, yes, if you want to get particular, you could point out many instances where some petty thief or clever con man ultimately got away with his or her scheme in the run of the show — and even in the run of this season. But the overall arc of the show is toward the marshals having their day, toward the Boyd Crowders of the world ultimately losing. Boyd has been so successful because he’s largely found ways to work around the central reality of the series he exists in, but when he directly goes up against Raylan and the marshals, even with the backing of the Detroit Mafia, he’s going to lose out. Raylan and the marshals save Ellen May — at Drew’s behest. Boyd and Ava are left to ponder their next move, surrounded by darkness, seemingly alone.

The reason the constant victory of said good guys doesn’t ultimately feel oppressive is that the show treats this as something like a tragedy. I can’t say Colton was my favorite character in the history of the show, but his death, which even he seems to understand is akin to suicide, is treated with a tremendous weight. It comes at the hands of Tim, of course, who’s been built up as a mirror image of Colton all season, and even though the two have shared only a handful of scenes across these 12 episodes, the moment when Colton goes to draw and Tim has to plug him in the chest is not once treated as a superficial “victory.” It rattles Tim, to the point where he has to have a little chat with Cassie, and Colton’s death is treated as something that didn’t have to happen.

Shortly before Tim kills Colton, Ava is trying to rebut Ellen May’s insistence that coming to Christ has given her a tremendous peace of mind. (Peace of mind is a concept that floats throughout the episode — as in what any of these characters would do to get it, even if they must understand how impossible it would be — to the degree that it provides the episode its title.) What she says is that everything that has led to Ellen May standing there, about to be shot by the woman who was once her madam, was the result of choices made by people, not some sort of divine plan. Delroy chooses to abuse the women in his employ, so Ava chooses to kill him, so Boyd and Ava choose to cover it up, and so on and so on. The choices we make matter more than some divine being’s will for us, Ava is trying to say, and by pinning everything on God or anyone else, we’re too eager to remove our personal agency from what happens.

I think this is key to why the good guys winning doesn’t end up feeling predictable or too much. On a lot of shows where lawmen run down criminals, the predictability and sense of security is the point: There are bad men out there, and there are good men who will keep us safe, and there is a great divide between them. While Justified, however, understands there is a divide between these sides, it also understands that the divide isn’t great at all. Just a couple of wrong choices here, and Tim could be where Colton is in that confrontation. Just a couple of right choices there, and Colton could be where Tim is or even at his side as his partner. “Peace Of Mind” involves, to a great extent, the majority of the characters seeing what they could have been in funhouse mirrors. Even Rachel accompanies Raylan and Tim down into Noble’s Holler and meets up with Limehouse, who essentially accuses her of being a traitor to her race, of leaving behind the people she should care about in favor of dancing to the tune of her white man puppet masters. Raylan, of course, has Boyd, his eternal dark reflection. And now Tim has Colton, the alternate-universe version of himself he had to put to death.

That notion of choices spins throughout the hour, the idea that because certain people do certain things, other things have to happen. You don’t have to believe in a god to believe in mild predestination, in other words. Whatever the mob is planning to do to Winona (having delivered her glider chair), well, it was probably always planning to do that as soon as Raylan bested the mob’s plans. There are actions and equal but opposite reactions, just as there has always been tit for tat. The world of Justified behaves in predictable ways, but the characters rarely find ways to break the cycle, and when someone dares, as Boyd did by trying to build up enough of a fortune to buy his way into high society, then the world is always there, waiting to smack them back down. Raylan escaped, but he had to run far away to do it, and it’s clear that this place is in his blood more than he’d like to admit.

There’s another way, though, and the season has quietly been building this argument in terms of Drew Thompson. All of the raging about how Drew doesn’t deserve a new deal that opens the episode strikes me as so much bluster, an attempt to throw us off the scent. It seems clear from his actions all season that Drew — at least when he was living as Shelby — is a fundamentally decent and worthwhile human being, someone who puts the good of others before himself and someone who made a surprisingly good sheriff, regardless of the unlikely way he got the job. He very quickly realizes that though he saved Ellen May’s life, he’s also dragged her even deeper into this mess, and he puts his own life on the line to get the marshals to rescue her. The hug between the two of them near the episode’s end is one of the most tender moments in the whole run of the show, and it makes everything come into focus — even for Raylan, who wearily allows for the hug, which technically shouldn’t happen.

I opined back in my second review of this season that Justified is perhaps the great drama most influenced by Christianity since the days of The Sopranos (which was steeped in Catholicism to an occasionally ridiculous degree). What’s interesting is how few of the regular characters are affected by these ideas of sin and redemption, of eternal despair and everlasting hope. I think that’s ultimately the right choice. Boyd’s flirtation with the church had to be temporary, and it wouldn’t make sense if Raylan were a Bible-thumper. Yet at the same time, the church is such a part of the texture of this world that its constant presence in the background of the series informs everything else that happens. I wondered if perhaps the snake handlers from the season’s first few episodes were a kind of red herring, a way to give Boyd something to do without getting him involved in the main plot at first, but the more the season keeps circling back to that church, the more it seems central to everything the show is trying to do.

See, you don’t have to believe in Christian principles like treating others as you’d want to be treated or making choices to live a fundamentally decent life to think that they’re probably pretty good ideas. And you don’t have to be an evangelical to understand that the notion of being born again could apply just as easily to a criminal who gets a lucky break and decides to redo his life the way it should have been done the first time. At its most powerful, beautiful level, Christianity — like all religions — is about the denial of the self for the betterment of others, about setting things aside and making the right choices to make the world a place that is slightly less inhospitable and cruel. Drew Thompson eventually came to understand that. And in a show with white hats and black hats, that might make him the ultimate good guy, no matter his past.

Todd VanDerWerff (@tvoti) is the TV Editor of The A.V. Club. His writing has also appeared in The Los Angeles Times and Hitfix.com.

By the Time You're Reading This, Justin Timberlake Just Might've Sold a Million Copies of The 20/20 Experience