Justified Season 4, Episode 11: The ‘Decoy’ and the Brutalized Constable 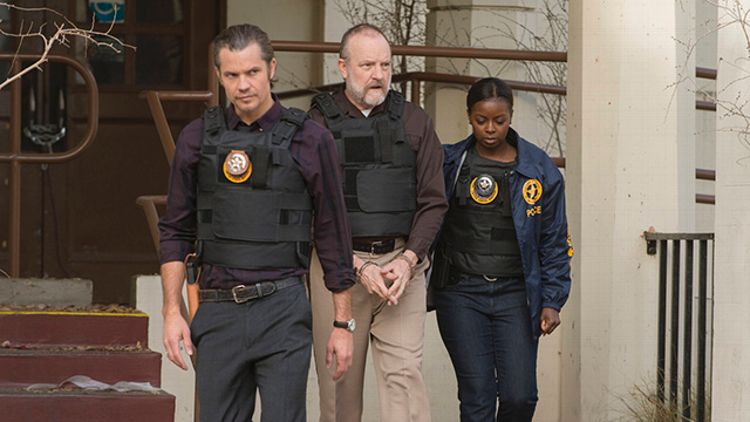 There’s no word for “Decoy” other than “awesome.” It plays off all of the plots from this season so far, sending them colliding in a story that pulls together almost everything we know about Harlan County, Kentucky. It’s a great character piece, it’s a genuinely thrilling hour of action, and it deepens the themes the season has been building all along. The second season of Justified has taken on an almost mythic status in my mind, as a season of TV that took a good show and made it into a great one by tapping into all the things that were unique about it in the first place. It was the season of Mags Bennett and “it was in the glass” and the complicated story of poor, orphaned Loretta McCready. It was the season that took Justified from a show I watched to a show I was obsessed with.

And if the final two episodes are anywhere near as good as last night’s, Season 4 just might end up being better.

The trick every great Justified season (or episode) pulls off is piling on the plot elements so furiously that the viewer barely notices all the deep character and thematic work going on at the same time. Hell, I get paid to notice these things — and have been pointing them out on a weekly basis — and even I didn’t realize just how deep a lot of this went until we were in the thick of what felt like it could become Raylan Givens’s last stand. That’s because episodes like “Decoy” make the choice to reveal character and theme through action. That seems like a fairly basic choice when it comes to storytelling, but so few TV shows even bother to attempt it. Characters can reveal so much when they’re backed into corners, and this season of Justified has been a never-ending succession of corners.

The episode picks up right where we left off last week: Drew Thompson is in the custody of the U.S. Marshals, who need to get him out of Harlan and into the safety of FBI custody. Standing between them and that goal are Boyd Crowder’s outfit and the Detroit Mafia, who are patrolling the skies with a helicopter, the better to keep Raylan and company from slipping out the back way, so to speak. So the Marshals set up a plan. Art and Tim will take a decoy convoy up through a narrow pass, which is exactly where Boyd has Colt set up a trap involving an IED. Meanwhile, Raylan and Rachel will head to an abandoned nearby school and hide out near the baseball field. Why? Well, that field would be a perfect place for a helicopter to land and spirit Drew away, provided Raylan can buy just under an hour of time in which no one can find him. The problem is that if anybody knows the way Raylan thinks, it’s Boyd, and he’s on the other side. (Or is he? I’ll get to that in a second.)

One of the great pleasures of this show is watching Timothy Olyphant and Walton Goggins play cat-and-mouse with each other, and the way Boyd treats the uncovering of Raylan’s plan as the ultimate puzzle, even though his very life might be on the line. It gives this episode the ultimate propulsion it needs. When Raylan takes Drew and Rachel to the abandoned school, it’s not immediately clear why he’s doing it, even if we as viewers are more or less aware that this seems like a pretty good place to hole up for a bit. But why here? Particularly when it doesn’t take long for those searching for Drew to realize that Drew’s not with the decoy convoy? Well, that’s where Boyd comes in.

Watching Goggins think might be more fun than watching any other actor on TV try to puzzle something out. (Only Bryan Cranston, of Breaking Bad, comes close.) When he realizes what Raylan’s up to and asks Ava and Johnny to fill Augustine in on the particulars of the time that astronaut came to visit and landed on the baseball diamond in his helicopter, the pieces click into place. All season long, the show has been good about giving Raylan and Boyd big, unmistakable stakes in the middle of everything else, and that’s present in “Decoy,” too. Both men are fighting for their lives, but both seem to be having a ton of fun doing so.

This episode might also be the most purely pleasurable of the whole season in terms of just listening to these people talk to each other. Early on, Augustine tells Boyd that he uses 40 words where four would suffice, and when Boyd replies with just four words, he makes sure to ask if Augustine’s going to allow for contractions. This sense of fun permeates the episode, whether it’s Art stuck listening to Tim and Colt talk out the movie version of the book Tim’s not even writing, or the Detroit mobster getting fed up with Raylan and Boyd’s bon mots in the stairwell. TV shows often pull the trick of having outsider characters grow exasperated at the ways the regulars behave, and the mobsters’ increasing frustration at having to hang around these erudite Kentuckians never stops being entertaining. And this seems like as good a place as any to share my thoughts on Boyd: He’s working with the Detroit Mafia, but he also works very hard to peel off all of Augustine’s crew, eventually getting him alone in the bar with Ava and Johnny. And Colt shoots the mobster he’s sent out with, seemingly for no reason. Is this all some sort of insurance policy on Boyd’s part, a setup for a power grab in the event that the Marshals successfully deliver Drew to the FBI and the Tonin empire is brought down? I feel less convinced of this now than I did around the episode’s midpoint, but I wouldn’t be surprised if it ended up being the case all the same.

This is also the kind of episode that just keeps topping itself. Tim stopping the convoy because he’s convinced he’s in the middle of an explosive trap is great, but the episode tops that with the “circle the wagons” moment, then tops that with Tim actually blowing up one of the explosives-rigged cars with a soda bottle Molotov cocktail, providing an exit route for Raylan to get the backup he needs now that Boyd’s figured out his plan. Similarly, there’s Constable Bob, who ends up in the wrong place at the wrong time, then holds his own against a serious beating from a mobster who calls himself Yolo. (Yes, he’s named after the popular acronym; no, Raylan can never remember it, calling him, among other things, “Yoda.”) Bob holds on just long enough to stab Yolo’s femoral artery, then shoot him, and it’s perhaps the most triumphant moment in an episode full of them. (Also good: Bob holding out against Yolo’s assault by asking him if he’s questioning him about a variety of famous non-Thompson Drews. He quickly runs out and has to resort to the likes of “Drew-bacca” and “Drew-sitania.”)

Yet what takes “Decoy” past just “awesome” and into the category of truly fantastic television is the way it brings the season’s character and thematic work to bear on the story line. The most telling moment in the episode involves Raylan telling Drew that, hell no, he’s not going to let this old con have a gun, no matter how close the two got when Drew was still Shelby, and no matter how much an extra gun up on the roof of the school would help Raylan out. Raylan says there’s a line between criminal and lawman, and since Drew started out on the opposite side of that line from Raylan, he can never truly cross it. The scene, as staged by director Michael Watkins, drives home just how isolated Drew is from everybody else, trapped by a past he’s been trying to outrun for decades. He’s a constant reminder of the running Boyd and Raylan have been doing, even if they seem to end up right back where they started. The inescapability of the past has always been the major theme of Justified, but it seems particularly acute this season. Or, if you look at it another way, Arlo Givens may be dead, but because of actions he took in the ’80s, he’s never hung as heavily over the series as he does tonight.

Harlan lore has also played a major role in this season — in keeping with the focus on the characters’ past — and it drives much of “The Decoy.” The mobsters might get tired of listening to these people talk to one another, but it’s how they puzzle out what’s really going on, based on what they know of one another. What delivers Drew’s deliverance? The thing that proves he’s really a Harlanite: his knowledge of a 5:30 coal train that provides a third way out of Harlan other than helicopters and automobiles. Raylan might wish to say that there’s a line between lawman and criminal, but there’s a deeper, more primal line between those who are from Harlan and those who are not. Raylan might see himself and Boyd as completely different now that he’s rejected his family’s criminal past and Boyd has given in to his own. But that’s not really the case, is it? As Boyd says, there’s a link between them stronger than anything else: They mined coal together. These men — even those who adopted this county as a home — will always be Harlanites first and everything else after.

Todd VanDerWerff is the TV editor of The A.V. Club. His writing has also appeared in the Los Angeles Times and at Hitfix.com.