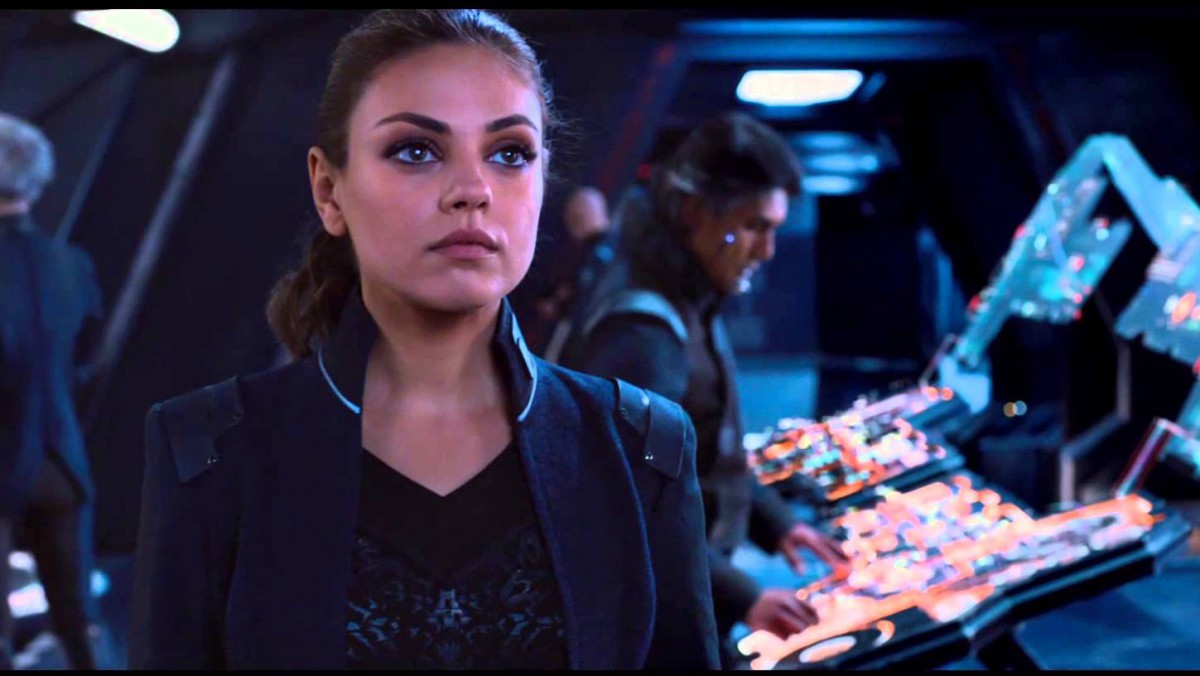 We consumers of American popular culture have accepted the virtues of certain kinds of badness. We know camp and kitsch and trash. Empire, on Fox, is currently medaling in all three events. The badness on that show, or any soap opera, sublimates the gutter into glamour. That’s easy. Earnest, honest-to-goodness, this-is-who-I-really-am badness is of a different order of magnitude, in which the artist (it’s an art, by the way) risks eternal embarrassment — or least permanent skepticism — in order to say something personal. Think of the so-called Kimye marriage project or Robin Thicke on his album Paula last summer: earnestly, nakedly bad.

So when two filmmakers decide to send an assimilated Russian immigrant who scrubs toilets in Chicago into an outer-space action-adventure, pay attention. Why? Because her name is Jupiter Jones and she’s played by Mila Kunis instead of, I don’t know, Pam Grier. Because Caine Wise, the bleach-blond, goat-eared, leather-clad tracker who’s surfing her there — via rockets in his boots! — appears to be part man, part farm animal, part West Hollywood rent boy. Because these two have fallen in love and can’t get up. Because love is the only navigable emotion in a swampy epic production that not only destroys downtown Chicago but is considerate enough — unlike, say, the average Michael Bay movie — to rebuild it instantly.

The two filmmakers are Lana and Andy Wachowski. Their new movie, Jupiter Ascending, mixes sleepiness and excitement, Channing Tatum and Eddie Redmayne, emotional clarity and narrative confusion, too much and not enough. The universe is endless, Earth is but a coveted pebble, and Jupiter Jones is, we eventually learn, a “recurrence.” Her genetic profile has caught the attention of three millennia-old siblings in some other galaxy: Balem (Redmayne), Kalique (Tuppence Middleton), and Titus (Douglas Booth). After their mother’s scandal-shrouded death, they now lead the House of Abrasax, a name that conjures images of the warring factions from the masterpiece documentary Paris Is Burning, in which the House of LaBeija could be counted on to do battle against the House of Chanel. What the movie lacks in drag balls it makes up for in chaotic shootouts, chase sequences, and Redmayne’s impersonation of a deathbed Andy Warhol sniping with Booth’s seemingly ambisexual boy-bitch. Balem is enough of a high-maintenance individualist to make you think the dead mother is actually Ayn Rand.

The recurrence in question is that of Mother Abrasax, who has bequeathed our solar system to these three. Jupiter appears to share her genes, making her royal, too — and therefore powerful and as entitled to dynastic spoils. So Titus has dispatched Caine (Tatum) to bring her to him. But a gang of Balem-affiliated bounty hunters is also on the scene, which is how you wind up with action sequences set amid alleyway fire escapes and in a cornfield.

Upon exiting, my wearied delight with Jupiter Ascending coexisted with pure bafflement. (Did a black woman in the form of a chariot truly transport Redmayne to an event? I believe a black woman did do that.) But I exited knowing that I’d seen a movie no other filmmaker could have made. Jupiter Ascending is about heeding cosmic and genetic destiny, and it is of a piece with what the Wachowskis believe is their artistic destiny: the fight against human vacuousness, and their belief in the fight to become who you know you are rather than who you’ve been programmed to be. Jupiter Ascending and their previous film, Cloud Atlas, are the first since Lana Wachowski came out as transgender, and now their ponderousness has a loose, sloshing, crazy quality. Their filmmaking seems, in its way, free. In the pursuit of some higher truth, the Wachowskis have perfected earnest badness.

The plot here rehashes the ideas of human exploitation in the three, increasingly overwrought Matrix films and the belief in reincarnation from Cloud Atlas, but with less surprise. Ideas fuel the plot, but the movie is incoherent from set piece to set piece. It’s not arguing as passionately as the other four movies, especially Cloud Atlas, which is as absurdly optimistic a vision of race and identity in the movies as you’ll ever see. The Wachowskis are committed to questioning the complacency of identity, like that Henry Louis Gates discover-your-roots show or TLC’s Who Do You Think You Are? — which, really, should be called How Black Is This Very Famous Person? The Matrix trilogy and Cloud Atlas made space-time odysseys out of struggle against a kind of predeterminism.

There is no struggle in Jupiter Ascending, just a lot of handsome pomp and noise and makeup and costumes and production. (Here, the actors of color — like Gugu Mbatha-Raw, Nikki Amuka-Bird, and Bae Doona — show up ornamentally for two or three short scenes, as help and hindrance, then vanish.) Its fabulousness is ultimately in the service of itself. Also, Lana and Andy lack the contrasting coconspirator they had on Cloud Atlas in Tom Tykwer, a director who brings different heat and speed and navigability to his movies. It must be said, as well, that Jupiter Ascending falls under so many influences — Terry Gilliam, George Lucas, Luc Besson, The Wizard of Oz, Carl Sagan, 2001: A Space Odyssey, Tom Hulce in Amadeus, Björk on the cover of Homogenic — that all the visions blur and compete. After a while, you’re watching a malfunctioning kaleidoscope as much as a movie. There’s no outside source material to push back against, the way there was with David Mitchell’s novel in Cloud Atlas. That’s probably why you wind up with sulking, transparent dialogue like, “The more you care, the more the world tries to find ways to punish you for it.”

But there are moments of loveliness along the way, such as when Caine and Jupiter show up at the farm of an earthbound fellow tracker (Sean Bean), whose farmhouse is infested with bees that seem to defer to Jupiter. There’s another in which Balem, in his space palace, has paused a replay of Caine’s rescue of Jupiter from his hunters, and you can’t take your eyes off of Tatum floating, in an amniotic state, up toward the right-hand corner of the screen. We’ve now been trained to watch a Wachowski movie looking for state-of-the-art technology to achieve a milestone, in the way the first two Matrix movies did. A moment like that doesn’t seem like much. But with a movie that’s available in 3-D, that slowest-motion shot provides a reason to want to touch the screen.

The scenes of Tatum power-skating and surfing across the sky and away from the film’s many infernos are oddly magical. Getting around that way looks hard, and Tatum doesn’t look embarrassed to be pretending to do it. He looks soulfully committed to the exertion of all that energy. He’s better here than he is in something like Foxcatcher, which needs an actor who can tell you what’s going on even when his lips aren’t moving. He’s one of those stars who’s better in motion, with physical work to do. He almost never stops moving here. Kunis is a different story. She’s the coolest, least urgent actor I’ve ever seen running from explosions and raining debris. It’s as if she wants you to know it’s all make-believe, to see the green screen. In the action sequences, she’s working against the siblings’ humanity mission. She wants you to know she’s a prop.

As for the Wachowskis, what you’re looking for in all of these crashing styles and amid all the grand earnestness is some sense they’re moving, too — forward, toward something new to do. Here, it’s outright comedy. The sequence in which Jupiter’s royal credentials have to be confirmed is a brief excursion into bureaucratic farce. It’s a marvelous sequence, in which the editing, acting, and camera placement just make you laugh, as does Gilliam, who shows up for a self-tributing cameo. More of that sort of filmmaking, please, Lana and Andy. Still, it remains odd watching them work with the loose, caricatured reality of everyday people, without the immediate coating of science fiction, as they do in the dining-table sequences with Jupiter and her big Russian family. It’s as if, to them, normal folks are from outer space. Jupiter mentions that she’s got a date, and the table erupts with excitement. “Is he Russian?” “Is he rich?” “What’s his sign?” It’s like the foreplay not for a space opera but for a movie genre on a faraway planet the Wachowskis should consider exploring: the musical. 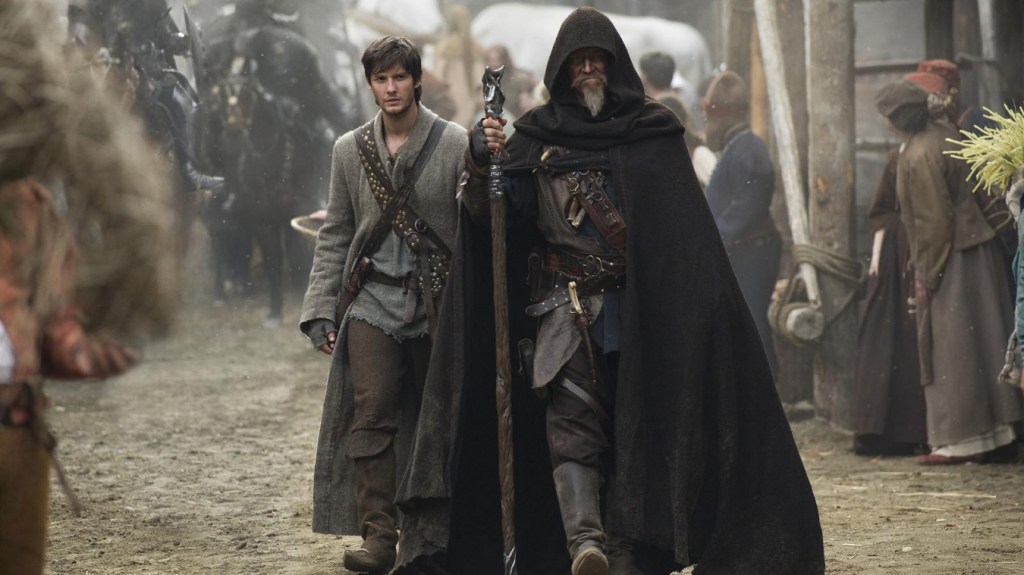 Sometimes you get halfway through a movie and you can’t believe that what you’re seeing made its way from Los Angeles or someone’s Los Angeles computer to where you’re sitting. It’s so dreary, dumb, and brutally dull. You can’t believe that no one thought to ask whether it’d be fun to watch Jeff Bridges and his apprentice, Ben Barnes, defeat a parade of villains played by women and people of color who can turn into killer beasts. This isn’t the worst thing about Seventh Son. The worst thing is that it exists at all. But it says a lot that no one thought to give Julianne Moore and Djimon Hounsou, for starters, more to do than vamp and growl.

The plot requires Barnes, led by the sorcerer, a “spook” played by Bridges, to track down a powerful gemstone that has fallen into the hands of Moore’s dark witch. There’s an enchanted girl (Alicia Vikander) for Barnes to fall in love with. Yes, it’s one of those medieval-ish romance-fantasy plots. It wouldn’t be such a chore to sit through if the movie were made with any sense of pacing or care. It’s designed to get a franchise going. Actual entertainment tends to feel very much beside the point.

These are grim times for staging action sequences. The barnyard finale, for instance, of The Boy Next Door looks as if it’s been staged by the animals. As directed by Sergei Bodrov, the combat in Seventh Son is quick and indecipherable and indifferent. You get better stuntmanship in two or three hours of a professional wrestling broadcast. For all that doesn’t work about the Wachowskis’ movie, you never get the sense the siblings don’t believe in what they’re doing.

Bridges, Moore, and Hounsou, for his couple of scenes, at least, proceed with little concern for embarrassment. They are professionals. Bridges no longer seems to care what an audience will think. Even when he’s just lazily doing Sean Connery in Highlander and Richard Harris in almost everything, he is really just doing The Dude. The fun of Redmayne in Jupiter Ascending is that his hammy villainy can be played against the prevailing nobility of the larger exercise. Seventh Son leans hard on its stars’ shamelessness, but after a while you wish they had a little more shame.

Songs of the Week: Chromatics, Schoolboy Q, Scooter Island, and 'Ye All Day