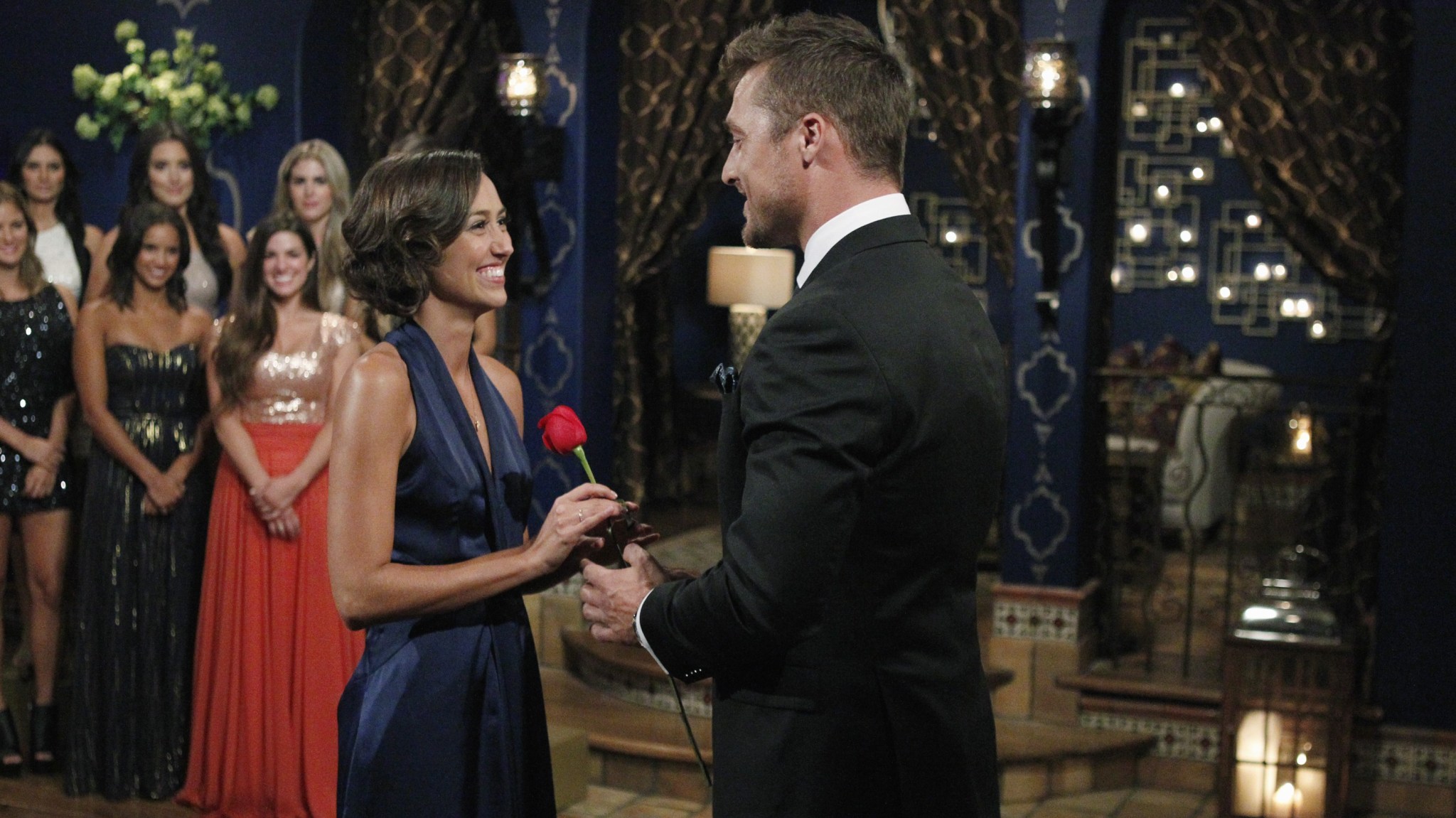 This week at Lowbrow Highlights Headquarters, we watched Kristen get shitcanned on Vanderpump Rules and observed the Real World: Skeletons gimmick suffer a down week. The Challenge featured the grossest act we have ever seen on national TV, and on The Bachelor, we had a full-on “Is she about to die or is she totally faking the whole thing?” breakdown. Let’s start with The Bach, shall we? But not, you know, this season of The Bach — let’s forecast a bit.

This Season Is Cool and Everything, But Yo, Who Is Going to Be the Bachelorette?

The Bachelor is peaking. We all need to appreciate where we are in the season. When there are too many women, you can’t remember any of their names and everyone is on their best behavior. When there are too few women, real emotions get involved, everyone cries, everyone won’t stop yapping about their “connection” with Chris, and it gets all serious and shit. Right now, we’re in the sweet spot; there are still enough girls there that Farmer Chris hasn’t weeded out all the crazy ones, but not so many women there that you don’t know their names. This is peak Bachelor.

So, sensing that the season about to take a turn for the worse, I set my gaze on the future of the franchise. More specifically, “Which one of these crazies is going to be the next Bachelorette?”

In order to identify who will be next to make out with a dozen dudes at the same time on national TV in search of, you know, “true love,” we have to first identify who we think will be the final four from this season. Here are my picks:

OK, if we assume that my picks are correct (huge leap), and we assume that the Bachelorette will be one of the final four from this season (not always the case), let’s examine the pros and cons of each of these women being the next to date a couple dozen dudes at a time on a Disney-funded1 husband expedition (in order of my preference):

Why Kaitlyn Should Be the Next Bachelorette: She has more personality, humor, and spunk than any other contestant on this show. She manages to be opinionated yet likable, and in her interviews she is straight-up funny. And she is Canadian. Everyone loves Canadians.

Why Kaitlyn Shouldn’t Be the Next Bachelorette: Kaitlyn, don’t take this the wrong way, I love you, I totally want to have beers, make fun of strangers, and dance to Beyoncé with you and all that shit, but, um, I don’t know how to say this, ah, fine I will just come out with it: The Bachelorette is usually what I like to call “physically aspirational,” like that dumb Emily chick that we suffered through for a season or an action figure of Scarlett Johansson from The Avengers. The one thing Kaitlyn doesn’t have going for her is that she’s what I like to call “normal.” Or “relatable.” Or “human.”

Why Jade Should Be the Next Bachelorette: She is hot and did a Playboy spread.

Why Jade Shouldn’t Be the Next Bachelorette: She is hot and did a Playboy spread.

Why Becca Should Be the Next Bachelorette: I really think that having a virgin Bachelorette would bring out the worst in all the male contestants, and I can’t think of anything that I would rather watch than a whole room full of dudes talking about how “they respect her choices” and have “been celibate for two years” and “put God first” while all trying to, you know, be first. God, that would be good. Why is she third again? Who made this list?

Why Becca Shouldn’t Be the Next Bachelorette: She has been on the show for five episodes, and if you asked me to describe her personality I would say, “She is quiet, she is a virgin, and … yeah, that’s all I got.”

Why Whitney Should Be the Next Bachelorette: She showed a nice amount of “down for whatever-ness” on her wedding-crash date with Chris; so much so that she out-badassed Chris by at least 25 points and had him a bit on his heels. That would be a great dynamic for the season; having a Bachelorette with that edge would be nice.2

Why Whitney Shouldn’t Be the Next Bachelorette: Her voice. Sorry, I know it makes me a bad person to point it out, but someone had to say it.

This week on The Challenge, Hurricane Nia did something so vile, so repulsive, so “holy shit, I think I might puke on my couch just because I watched that” that it should be banned from being shown on TV. The only reason that this act was allowed to air on national television is because no one at the FCC ever considered it could possibly occur. This act was so gross that I considered not even including it in this column.3

Let’s just get down to it:

DRINK A GLASS OF ZACH’S SWEAT.

The offer was that if she drank a glass of Zach’s sweat, she would get seven dollars (American). Again, seven dollars. Of course, she accepted.

First, and also gross, Zach had to procure the glass of sweat from his shirt:

I love The Challenge. So much. Shout to you, Nia.

Wait, What Is Jade From The Bach Doing On Vandy?

In the first scene of Vanderpump Rules this week, the weirdest thing happened. No, no one referenced Tolstoy or anything — not that weird. Jade from The Bachelor was partying with the SURvers: 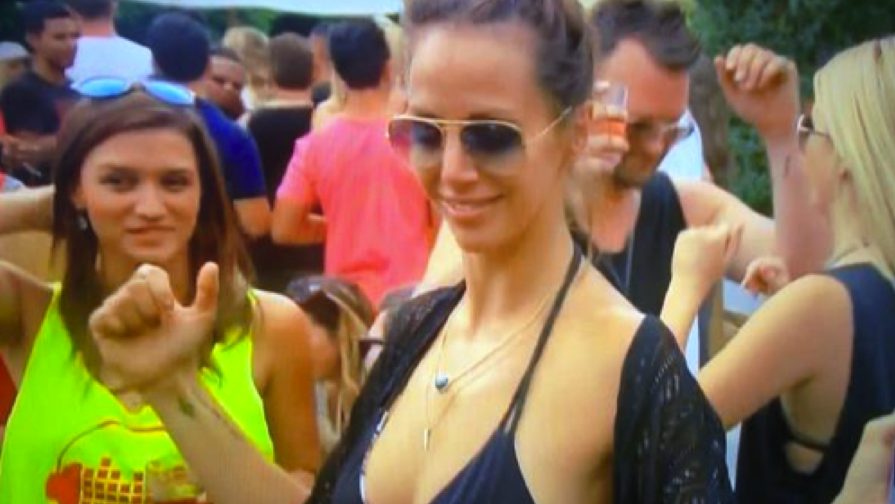 This is easily the Lowbrow Highlights question of the week:

Do they know each other? Or do all reality TV people in L.A. just kinda gravitate to the same events? Did Jade try to stay in front of the camera on purpose? Why is everyone but Jade dancing? Why is Jade wearing that weird T-shirt? Was this before or after taping The Bachelor? It looks super sunny — is Jade not wearing her sunglasses so she is recognizable on camera? What is that weird string coming from Kristen’s boob? Does Kristen have a seven-head and I didn’t notice?

This week on Real World, it was Violetta’s turn to have her skeletons inhabit the house. Let’s just say it wasn’t the episode that we expected to see. Upon learning about the “Skeletons” format and hearing that a couple of girls from her hometown were en route to live in the house, Violetta spazzed the fuck out. She called the producers and promised that if they sent these women to the house, things would stop being polite and start getting homicidal. However, when the two women that Violetta hated the most and wanted to see the least arrived, that wasn’t exactly the case.

A lot from this episode wasn’t as I expected, so I decided to make this week’s Lowbrow Highlights Top Five the “Top Five Most Confusing Things About This Week’s Real World,” listed from “Nah, that isn’t that crazy, really” to “I no longer believe in the concept of time and space”:

4. Tony. Just Tony: What is this dude’s deal? Last episode he was making out with his ex, his first love, his roommate, and the “bar local.” This episode, he immediately started flirting with Violetta’s mortal enemy the second she walked into the house.4 Then, he started getting with his roommate Madison and ended up hooking up with Violetta’s mortal enemy. In life, it isn’t what you do, it is how you do it. He could have done this in a discreet, respectful way in which no one’s feelings got hurt. Everything he has done on this show has pretty much been the opposite of discreet and respectful.

3. Bruno Lost His Mind — for Real, Though: Basically, the best part of reality TV is when people argue and/or fight. Let’s just call it like it is. However, there are certain points when the arguing/fighting crosses a line and it isn’t fun to watch anymore. This week, Bruno crossed that line.

It had already crossed the line from “Oh, they are having an argument, isn’t this fun to watch” to “This is making me uncomfortable, please make it stop” when Bruno grabbed a bench, picked it up, and Hulk-smashed it on the ground. Then, as if he wasn’t already in the “I will never fully trust this dude again because he has a dark side”  territory, he picked up a coffee table and smashed it on the ground. Both the coffee table and the bench were six inches away from sending someone to the hospital. Of course, they were buddies again by the end of the episode, because Real World.

2. Violetta Not Attempting to Murder Her Enemies: When Violetta’s (Instagram) enemies arrived, she freaked the fuck out, had a panic attack …

… and put her hair into a ponytail, ready for a fight. I full-on thought that she was going to pull a razor from her tongue, slice these chicks open, and then start lapping their blood off the floor. That isn’t exactly what happened. They talked about Instagram for a while and then went to dinner. For real.

1. “I am so mad at Violetta, because we all know how bad Bruno’s temper is.” This was Sylvia’s response to Bruno’s spaz rage Hulk-smash freakout moves. That doesn’t make any sense.

T.J. Lavin is a simple man. He likes to ride bikes, he likes dogs, and he hates quitters. HE FUCKING HATES QUITTERS. This week, no one quit, but no one tried their hardest, either. You see, this week they did one of those “suspend you over water and film you on a Phantom camera as you fall into it” challenges, and the dude part of the couple was supposed to jump off a flying surfboard onto a flying heavy bag,5 but most of the bros didn’t even try because it was too hard. We all know how T.J. feels when competitors don’t give their all:

I love The Challenge.

The Bachelor Producers Subtly Made You Think Kelsey Was Crazy, Then Kelsey Overtly Proved It

On The Bach, Kelsey took her opportunity to tell Chris about the death of her husband. It’s an awkward thing telling the guy you never met and want to marry and is dating all your friends that your husband passed away due to a freak heart-failure situation a year and a half ago. It is a really awkward thing when the Bachelor producers lay some music that is not creepy enough that you notice the first time you watch, but totally creepy enough that for a second you will think she killed him. I know, I know, it is crazy for me to even mention. Before we continue, I want to make it very clear that I don’t think this woman killed her husband. There is no reason to think she did, but the music is so unconsciously influential that it is hard not to consider it.

Oh yeah — it also didn’t help that after she told him, she said this (and note the creepy, horror movie, wind-chimey things at :10):

And then at the rose ceremony, she did this … 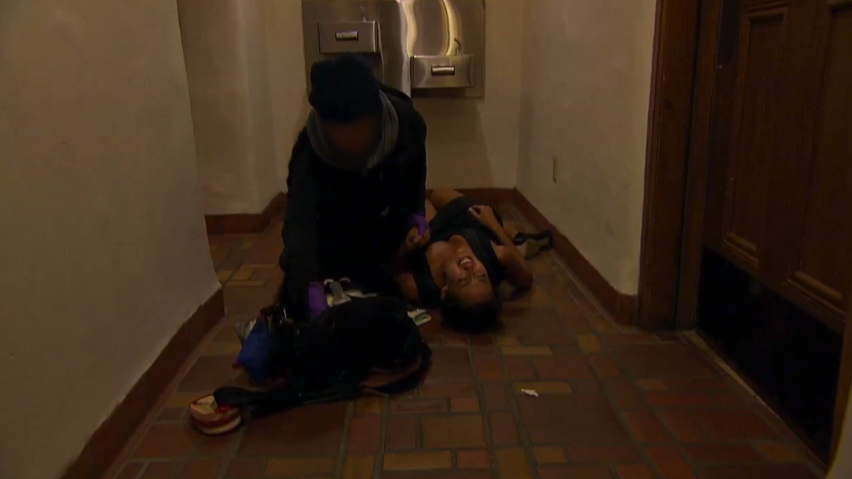 … and needed a paramedic because of her “anxiety attack.”

Want to know what Ashley I.’s “story” is? She is a virgin. I fucking love reality TV.

Enjoy the shit out of your weekend, listen to The Right Reasons, don’t drink any sweat, and always live your story.

Filed Under: Reality TV, The Bachelor, The Challenge, The Real World: Skeletons, The VANDERPUMP ruLES