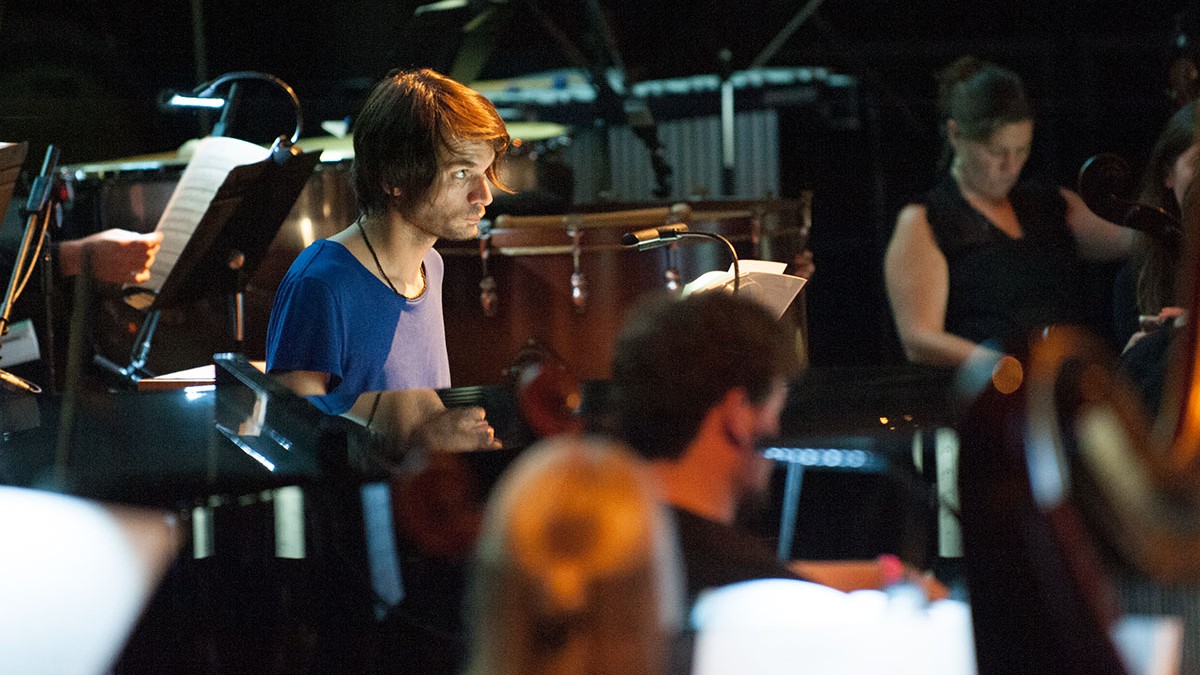 A blank screen inside another screen. One after another, audience members filed down the center aisle of the United Palace Theatre on Broadway and 175th Street in Upper Manhattan to snap cell-phone pictures of the screen and the stage below, which was filled with empty folding chairs that would soon accommodate a 50-piece orchestra. In a couple of hours they would witness the American premiere of Paul Thomas Anderson’s 2007 masterpiece There Will Be Blood featuring live accompaniment of Jonny Greenwood’s remarkable score, with Greenwood in attendance.

Earlier that day, tech freaks lined up at Manhattan’s flagship Apple Store to snatch newfangled phones and ogle over screen size, though this building, a spectacular neo-Assyrian palace completed in 1930, seemed to house more phone addicts than anywhere on the island. The wait time before an orchestral performance — the settling of attendees into a seemingly never-ending expanse of seats, the tuning and warming of strings that were soon to be thrashed and plucked beyond recognition — seemed to gnaw at the crowd. They’d stood in a line that stretched three full blocks, surrounded by neon from cheap takeout restaurants and locals wondering why the crosswalks were suddenly crushed with millennials. Those seeking instant gratification weren’t in quite the right place. The focal point of Friday nightlife was miles away. The landscape onscreen would be desolate and unforgiving. So in the two hours before showtime, they snapped pictures of folding chairs. I even did it, too. 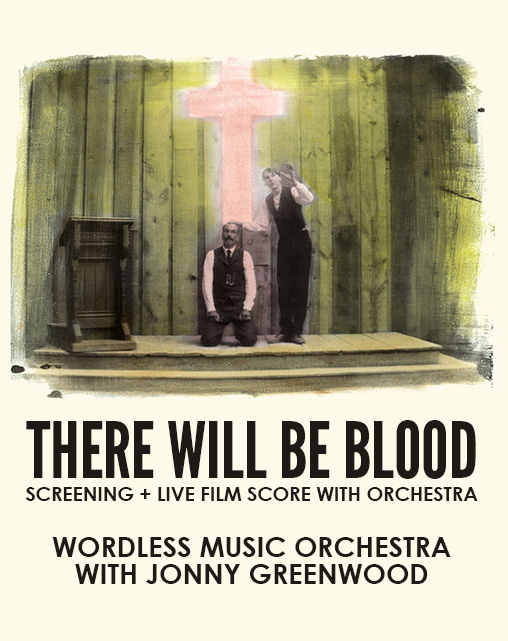 For an evening, the bleeding edge of technology collided with Anderson’s meditation on blood, energy drainage, and the corrosive effects of fortunes built on thievery and broken family bonds. In two weeks, Anderson’s adaptation of Thomas Pynchon’s Inherent Vice, also featuring a score from Greenwood, will premiere at the New York Film Festival, hosted by the Film Society of Lincoln Center. (In Pynchon’s own neighborhood.) On the same night of the Blood screening, the Avery Fisher Hall at Lincoln Center hosted a screening of Charlie Chaplin’s Modern Times, accompanied by the New York Philharmonic. Chaplin, who composed the score for several of his films, received an Oscar for scoring 1952’s Limelight, despite his modest admission that he often “la-la’d” the notes he wanted while his arrangers did the rest. Greenwood, whose score for Blood was heralded the millisecond audiences heard the dissonant chord of 12 tones that opens the film, was famously and wrongly disqualified for Oscar consideration for Blood, based on Anderson’s repurposing of portions of Greenwood’s previously existing compositions, primarily “Popcorn Superhet Receiver.” A score chock-full of woodblock for The Master in 2012 was also overlooked, and who knows what prospects he may have with Inherent Vice, based on a book with musical references that skew more Country Joe and the Fish than Avery Fisher Hall.

Once bows were raised and the opening Dramamine notes swirled over the Miramax logo, Greenwood’s presence onstage was notably understated. At the helm was conductor Ryan McAdams, who shared top billing with the Wordless Music Orchestra, a New York–based collective doing heroic work recapturing the thrill of moviegoing through a series of live accompaniments in nontraditional venues. It took a moment to spot Greenwood, whose lantern jaw was barely visible from the back row, where he was stationed at the ondes martenot, an early electronic instrument familiar to Radiohead completists for providing the ghostly gloss over “Pyramid Song” and “How to Disappear Completely.” It’s also the instrument that accompanies Daniel Day-Lewis in My Left Foot as he painstakingly paints a portrait with his toes for a neighborhood girl so overcome by his efforts that she immediately returns it. In Blood, the ondes features most prominently in a montage of oil workers hopping off trains, ready to rape the land under the watchful eye of Day-Lewis’s Daniel Plainview, the most contemptuous screen presence in a generation.

For all the stock placed in immersive theatrical experiences — 3-D jousting matches, 4DX screenings that spray mist in your face — nothing can quite compare to the analogue pleasure of live orchestration. As Greenwood recently told the BBC, “Things can still go wrong [when] things are being done just for the room, just for the moment, which is what makes it so interesting.” The best time he had recording the soundtrack, he added, was sitting with Anderson among the orchestra. Anyone struck by the moment of unbridled enthusiasm in the documentary That Moment: Magnolia Diary when Anderson hears the first playback of composer Jon Brion’s brassy climax for the What Do Kids Know? theme song can only imagine his reaction when a cyclone of strings first whisked Plainview to new heights.

At the United Palace Theatre, the orchestra ignited that same spark. Visually, they provided a mesmeric counterpoint to the images onscreen. During the campfire scenes, the flicker from the flames matched the glow of the lamps illuminating their music stands. Whenever the drill string of the oil derrick hypnotically bobbed at the center of the frame, it was as if the rig was extracting all it could from the musicians below. After lead cellist Clarice Jensen’s commanding solo performance of Arvo Pärt’s “Fratres (for Cello and Piano),” which accompanies Plainview’s son adapting to a life of deafness while his father rubs crude oil in pastor Eli’s hair, her instrument seemed as tapped as the land Eli falsely believes will provide salvation.

Another benefit to live orchestration is the absence of the score on the soundtrack, which somehow enhances the overall sound design. The oozing and gurgling of freshly tapped oil, the wheeze of Day-Lewis’s overtaxed sinuses, the cries of an orphan — all seemed to pop more than ever, particularly in the stark, dialogue-free prologue, a sequence routinely compared to the Dawn of Man section of 2001: A Space Odyssey. (Fittingly, 2001 was the final film to screen at the United Palace before its run as a Loews “Wonder Theatre” ended in 1969.)

The only grievance was the relatively subdued execution of the percussive hailstorm that invigorates the fiery gusher sequence on which the film pivots. (The score is derived from Greenwood’s 2003 composition “Convergence.”) Perhaps if a fleet of percussionists had been embedded in the crowd, startling unsuspecting viewers like William Castle armchair zaps, the impact of the original mix could have been replicated. The recording, Greenwood has said, was made by sitting on the floor of the studio “like a toddler in a playgroup hitting drums, one at a time” to achieve a sense of “percussive chaos that was more kind of kindergarten.” The tremors that night never quite shook the schoolhouse walls.

More arresting was the sound of Plainview hammering spikes in the earth to demarcate his prospective pipeline. Each strike echoed through the theater like a kill shot, intensified by Greenwood’s “Proven Lands,” a pizzicato assault that required rows of violinists to shift and strum their instruments from their laps, accompanied by a hint of headbanging. Moments like this, along with the dedication card to Robert Altman over a final blast of Brahms, were cause for an ovation. During the curtain call, Greenwood never emerged from the back row, allowing McAdams and the Wordless Orchestra to receive the applause.

Afterward, a trio of Radiohead fans slid onto a nearby bench on the subway and expressed satisfaction with the performance, though one confessed he “thought Jonny would play more.” (That they were taking the A train during this conversation carries a certain resonance for those familiar with the conductor/songwriter dynamic of Billy Strayhorn and Duke Ellington.) Throughout the ride, the group spokesman kept humming the bass line of “The National Anthem” from Kid A, as if to cheer himself up. He shrugged and offered his final thoughts on Greenwood’s auxiliary role: “It’s like he didn’t need to be there.” He didn’t need to be at an Oscar podium, either. Swapping a baton for a straw, he’d already drank it up.

James Hughes is a Chicago-based writer and editor who has contributed to Slate, The Atlantic, Wax Poetics, and the Village Voice. For a decade, he was an editor and publisher of Stop Smiling magazine and its book imprint.

Filed Under: Music, Movies, there will be blood, jonny greenwood, Radiohead