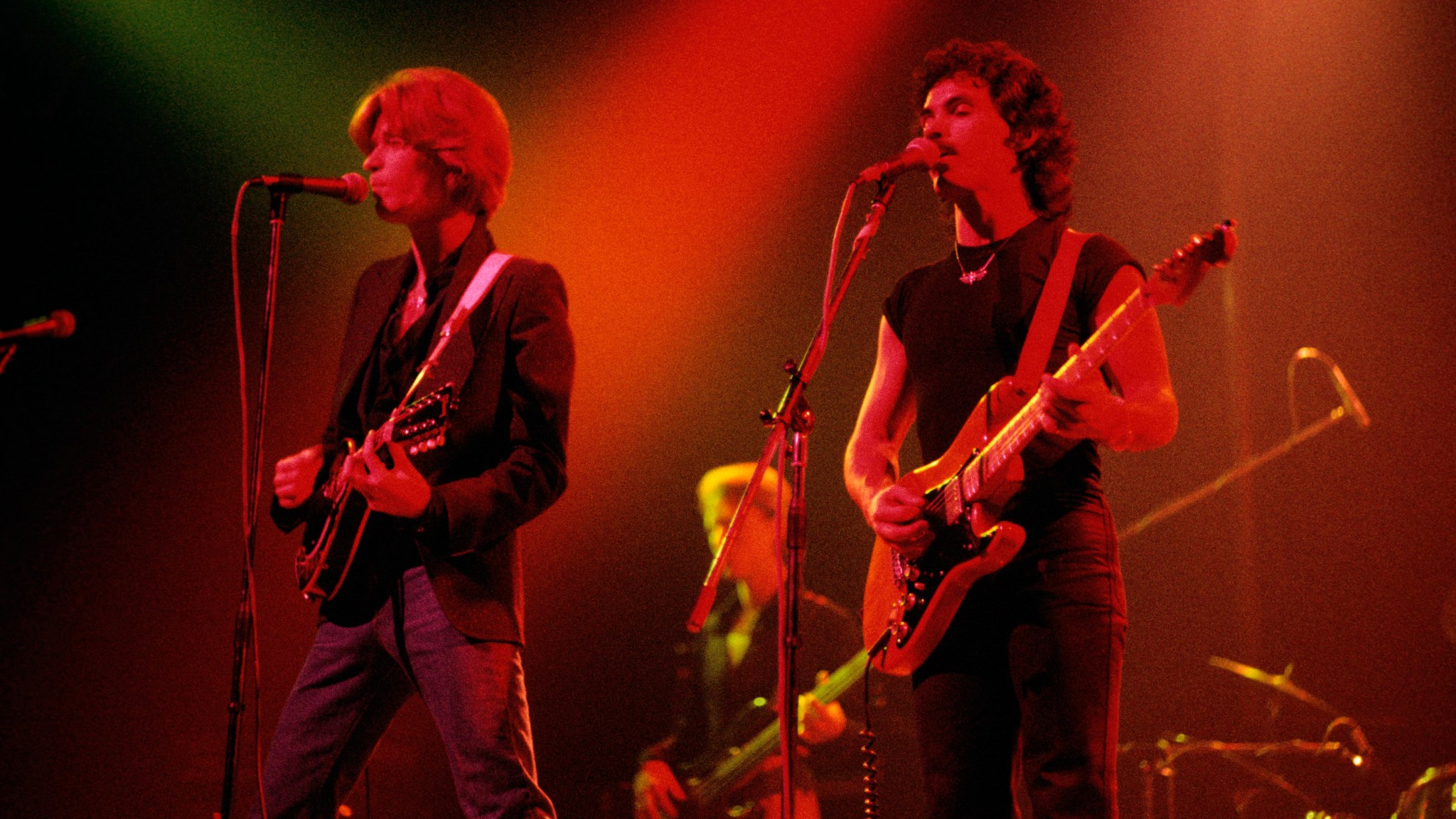 When preparing for these interviews, it’s usually obvious which song is a band’s biggest hit. But when it came to Hall & Oates, I was stumped. Their greatest hits are truly great — “Rich Girl,” “Kiss on My List,” “I Can’t Go for That (No Can Do),” “Private Eyes” (the first rock song I ever heard, when someone snuck a CD into my rock-free Pentecostal Christian home), “Maneater,” “Sara Smile,” “Out of Touch.” So many options. Asking friends didn’t help narrow it down because everyone has their personal favorite. “It’s a good problem for me and Daryl, bad problem for you,” said John Oates. When asked to weigh in on what is their biggest hit, he tackled the problem philosophically: “You have to define what ‘biggest’ means — if you’re talking about the most for sales, if you’re talking about highest chart position, if you’re talking about a song that has endured the test of time.”

After going back and forth over the merits of each song (“‘Sara Smile’ is our first big hit, but it didn’t go to number one”; “‘Kiss on My List’ wasn’t even supposed to be on the album”), Oates finally ended the discussion: “I think we could go around like this for hours. We’re going to make this easy for each of us. Let’s talk about ‘She’s Gone.’” So we did.

Click here for all of our interviews with fascinating people from the worlds of sports and pop culture.
“She’s Gone” was a song we wrote together and recorded on the Abandoned Luncheonette album of 1973. Initially, we knew it was a very strong track. It went into the Top 30, which was respectable because we hadn’t had any pop hits at all. Shortly thereafter, a group called Tavares — an R&B group — re-recorded it and it went to number one on the [soul] charts, just before “Sara Smile” was released.

When “Sara Smile” became a hit, Atlantic Records decided to rerelease “She’s Gone” — our version — and it climbed up the charts. A hit record has a lot more to do than just the quality of the song itself; it has to do with timing, it has to do with momentum. If “Sara Smile” hadn’t become a hit, and Tavares hadn’t had a number one R&B song with [it], who knows whether our version might ever have been a hit. 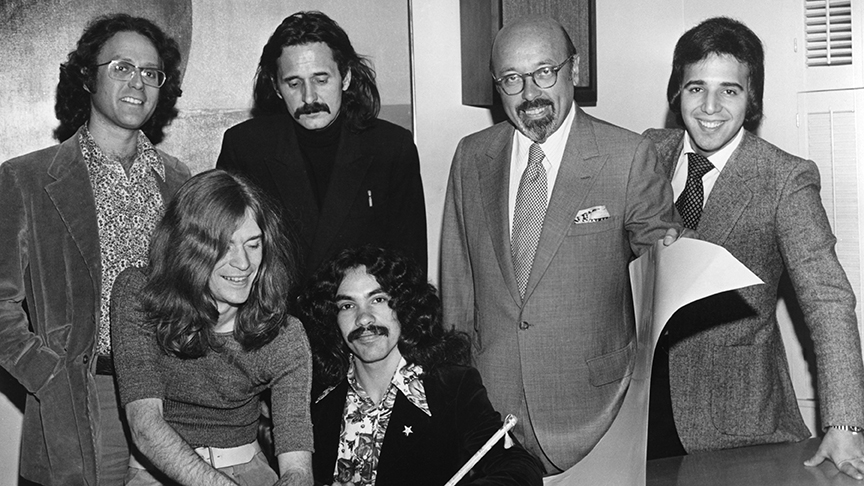 We still play “She’s Gone”  to this day, and the song sounds as fresh and as new as it did when we wrote it, back in 1972. We just played a show last night — and we play it in the middle of our show — and the standing ovation for that song was so long that we literally couldn’t play the next song for about two or three minutes. And that’s in the middle of the show!

This is the song that put us on the map. It has such a profound importance in the scheme of all the other records we made. Without this song, we might not have had a career. Making money and chart positions are not that important to me. It’s great, a great thing, it’s fabulous and all that, but really, what’s really important to me is to have written something that has stood the test of time.

What do you remember about writing it?

I remember everything about writing it! I had met this girl at three in the morning in a soul food restaurant in the Village called the Pink Teacup. It was one of the few places in the Village in the early ’70s that actually stayed open all night, believe it or not. I was in there, God knows why, at three in the morning, and in comes this gal, she had a pink tutu and cowboy boots on and it was December and I thought that was pretty cool. So we started dating, we kind of hooked up. It was the ’70s, so things happened kinda fast. We saw each other a few times, and then I asked her if she wanted to hang out on New Year’s Eve, and she said yes. She was supposed to come to my apartment and meet me and she never showed up. As it was getting toward midnight, I finally realized that she wasn’t coming and I just sat down with my guitar and started writing this almost, like, folk song. All it said was “She’s gone, oh oh oh, she’s gone” and “What went wrong?” It was really very simple.

The next day Daryl came back to the apartment and we sat down, and I said, “Hey man, you know I got stood up last night, but I wrote this chorus, this hook that’s kind of cool.” And I played it for him, and he sat down at the piano and he immediately started getting into it and he played the piano part that you hear in the beginning of the song. We began to write the verse together. I bet it didn’t take more than an hour to write the whole song. We just used very mundane, everyday images to kind of symbolize loneliness and loss, even in the opening line, “Everybody’s high on consolation / everybody’s trying to tell me what’s right for me,” “I’m worn as a toothbrush hanging in the stand,” these very simple, lonely images, they’re very kind of everyday things that people can relate to but somehow speak on more universal terms. I think that’s really why the song has connected over the years, because everyone can relate to the idea of loss. We just captured this spirit in some way that has just stood the test of time.

Where did you record the album?

We recorded the Abandoned Luncheonette album in New York at Atlantic Records with Arif Mardin producing. It was an amazing collection of musicians. It was Bernard Purdie on drums, one of the most legendary studio musicians of that era. A guy named Steve Gelfand, who was actually playing with us in our live band, played bass on that one. I played the wah-wah guitar, Chris Bond played the lead guitar, Daryl of course played piano. We sang, Daryl and I did all the vocals ourselves, Arif Mardin did the string arrangement, and we came up with this four-four half-step modulation, which brings the song to this huge crescendo and has this incredible build, where it modulates at the end. It just had this unbelievable quality.

How did you come to work with Arif Mardin? He was one of the biggest producers of the time.

The reason we got signed to Atlantic Records was because of Mardin. We had auditioned for many, many record labels when we were just starting out, and we had a lot of interest, but no one seemed to want to sign us, for who knows what reason. We eventually auditioned at Atlantic, and at the end of the audition, Arif just turned around to the business guys who were there and said, “I want to produce these guys.” And that’s all it took, because his endorsement was all they needed to know.

One of the first music videos that was ever made, I believe. It was way before MTV. No one showed it, because there was nowhere to show it, but we made it anyway. There’s a long story behind that one too. Have you ever seen that video?

I saw it a while ago, and there are recliners and I think you’re wearing a sleeveless tuxedo shirt?

I’m wearing a penguin suit and Daryl’s wearing a bathrobe.

What’s the story behind that?

We were pretty crazy at the time, and we just carried our insanity right into the studio. We brought furniture from our apartment, we dressed up in crazy clothes, our road manager dressed up in a devil suit. They had no idea what we were doing and they got so pissed off at us, they thought we were mocking them. They refused to air it! In fact, the television station called our record company and said, “These guys, I don’t know who they think they are … they’re a bunch of jerks, mocking us.” But we weren’t mocking them. We just wanted to do something unique and original. But of course, it was 1973, so they didn’t get it.

I was at the Rock and Roll Hall of Fame inductions when you were inducted and everyone was like, “This should have been done ages ago.” Is it as much of an honor as it seems?

No. It really isn’t. It’s OK, it’s great. Everyone mentions it, everyone wants to talk about it, that’s fantastic. But to be honest with you, it’s a really subjective group of people making decisions on music based on their particular point of view, and it doesn’t necessarily represent really what this giant incredibly expansive world of music is all about, by any means. When we were inducted into the American Songwriters Hall of Fame in 2005, to me that was a much, much more profound and satisfying moment than anything else because, if you try to look at it with some perspective, had we not written those songs, we wouldn’t be in the Rock and Roll Hall of Fame. To be inducted into the American Songwriters Hall of Fame, to me it gets back to the essence of what we do. To be included in the great legacy of songwriting — songwriters like George Gershwin, Cole Porter, people from the Brill Building, Leiber and Stoller, Phil Spector — that, to me, is the essence of what we do. Without songs, we have nothing. I look at myself as a songwriter, we started as songwriters. To me, that was the biggest honor that anyone could have ever given us.

Hope/less? Another Failed Shot for Ryan Reynolds; Plus, 'The Gallows' Nightmare and 'Tangerine' Dream