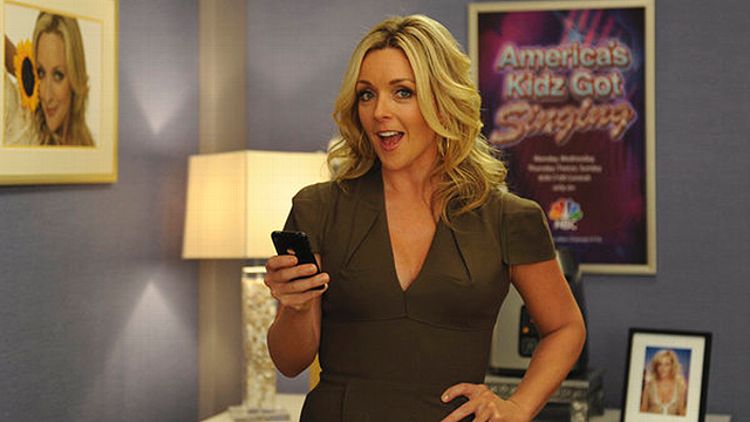 In this golden age of television, there sometimes enters a character who shifts all former expectations; a small-screen presence who shines through the flimsy edifice we call a human body to reveal the truth: that we are just wriggling brain stems driven by our insane lusts. Television has long been supplanting the novel as the medium we turn to for long-form narrative investigations into public personas and true selves, and among its gallery of modern antiheroes, one complex yet subtle figure stands alone: Jenna Maroney. Jenna (pronounced Jenn-ahh) was 30 Rock‘s secret weapon in a show stocked with them. Jane Krakowski, formerly known best for playing ditzy Elaine on Ally McBeal, summoned everything from her lifetime walking the boards for her portrayal of Jenna: the ultimate actress.

While Jenna is an attention whore, Krakowski is a generous performer who is incessantly funny whether speaking or reacting. Jenna Maroney feels like a real person, like a woman who has endured thousands of humiliating auditions and still wakes up every morning thinking, I’M GONNA BE A STAR!  Maybe it’s because Krakowski has logged decades in film, TV, and theater herself. Jenna-esque credits on Krakowski’s CV include her start on the soap opera Search for Tomorrow, her role as the health teacher in a Lifetime movie called Mom at Sixteen, playing Betty Rubble in The Flintstones in Viva Rock Vegas, and an appearance on Law & Order: Special Victims Unit as a serial killer targeting elderly women.

A trained singer and Broadway actress, Krakowski originated the role of Dinah the Dining Car in Starlight Express, the 1987 Andrew Lloyd Webber rock musical about roller skating trains, had an adult-contemporary radio hit with pianist Jim Brickman called “You,” and murdered Dennis Franz in the video for the Dixie Chicks’ “Goodbye Earl.” Krakowski’s first film role was in National Lampoon’s Vacation, as Cousin Vicki, who dropped the infamous boast, “Yeah, but Daddy says I’m the best at it” to Audrey Griswold on a seesaw. As Jenna Maroney, she continued her tradition of getting the best lines.

Jenna and Tracy Jordan comprised 30 Rock‘s id, and Jenna in particular was Liz Lemon’s twin who wasn’t evil so much as just unbelievably self-absorbed. While Liz struggled to master the most basic feminine habits, Jenna’s vanity was so large it warped space-time. Tina Fey’s long-documented envy of blondes (aside from Amy Poehler) took its ideal form in Jenna. OK, there was also Cerie. But if Cerie inspired pure eye-rolling jealousy in Liz, Jenna was the nonstop reminder that being a beautiful object (especially professionally) is its own kind of nightmare. While Jenna lived a fairly successfully blonde life, there were plenty of downfalls: a chicken-fried Florida youth with a stage mother; druggy, tempestuous, violent years with Mickey Rourke; arm wrestling with Julie Bowen for scant roles in summer comedies about guys who hate their middle-aged blonde wives.

Jenna was histrionic, and it was wonderful. Even in the moments when she was made more human, she was still a preposterous human. There was plenty of hugging, but hardly any learning. Jenna’s relationship with her cross-dressing Jenna impersonator boyfriend, Paul (Will Forte), absurd even by 30 Rock standards, was not only hilarious but oddly touching, a nonsense ode to the idea of love without boundaries. I really rooted for Jenna and Paul to get back together after they separated to go on sexual walkabouts. Their relationship felt more real to me than Liz and Criss’s. While I will miss all of the characters, I will miss Jenna most of all.

Despite her diva attitude and constant ridiculous demands, Jenna never really came across as a bitch. She’s too silly. Jenna seems like much more of a Gretchen Wieners than a Regina George, as the show itself suggested in “Game Over,” when we saw Jenna sucking up to tween queen bee Kaylie Hooper (Chloe Moretz). Her endless desire for a cam-er-ah, marker of her farcical actressy egotism, has become pretty mundane in this post-selfie world. There is something very attractive and reassuring about Jenna Maroney’s rootless and boundless confidence. It’s all-American.

Let us celebrate Jenna the best way we can. With GIFs.