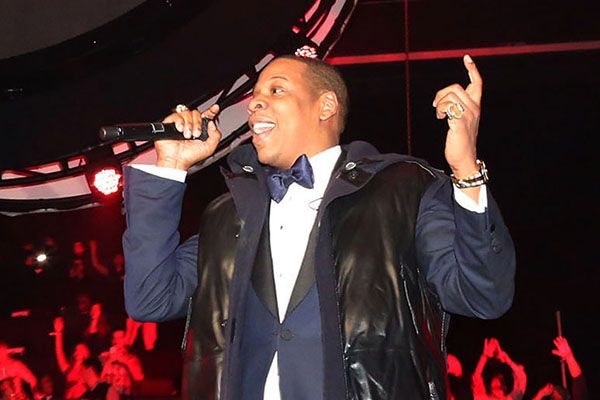 This weekend, Jeymes Samuel — a musician who performs as The Bullits and is also, coincidentally, Seal’s (Henry Olusegun Olumide Adeola Samuel) kid brother — tweeted “Jay-Z and myself have been working tirelessly on the score for the upcoming #CLASSIC The Great Gatsby! It is too DOPE for words!” By #CLASSIC The Great Gatsby, Samuel means Baz Luhrmann’s upcoming ultra-splashy 3-D rendering of that trusty old Fitzgerald joint. And by Jay-Z, Samuel means Jay-Z.

There’s some possibility Samuels is overstating the case, as an official confirmation hasn’t followed his announcement. But the tweet hasn’t been deleted either, and no one seems ready to deny it, and it makes sense Jay would be officially involved, as he’s already been unofficially involved. For one, The Throne’s “No Church in the Wild” plays in the trailer. For two, according to Isla Fisher, Luhrmann was bumping Hov on set: “On my first day he had Jay-Z pumped up full, and we did the entire scene with … Jay-Z in our ear on full blast while acting. It was just so liberating.” And then there’s the fact that now everyone wants to go ahead and associate Jay Gatsby’s irrepressible rags-to-riches pluck and evocation of supreme American grandeur with Jay-Z’s somewhat grittier version of the same. Then again, Jay Gatsby SPOILER ALERT, BUT MOSTLY JUST FOR ANYONE WHO DIDN’T DO THEIR FRESHMAN ENGLISH REQUIRED READING ends up shot dead and with no one showing up at his funeral, and I’m pretty goddamned sure Jay is not going out like that.

I would just like to point out one thing though: How exactly does Jay-Z — who, at least to my knowledge, does not play an instrument or write music — go about co-composing an instrumental score? Are we perhaps reading a bit too much into the possibility that Jay is going to be credited as executive producer on the score, meaning he’s been coming into the studio to listen to the score in progress and weigh in with some well-timed head nods and “that’s hot”s and “that’s not hot”s in between Googling “what does a godfather actually do?” Not, if that does turn out to be the case, that I’m complaining. Just about everything in the world could be improved by having Jay-Z judge what element of it is and is not hot.

Anyway, here is a video of Jeymes Samuels dressed up as a homeless person and having a dance with Rosario Dawson.