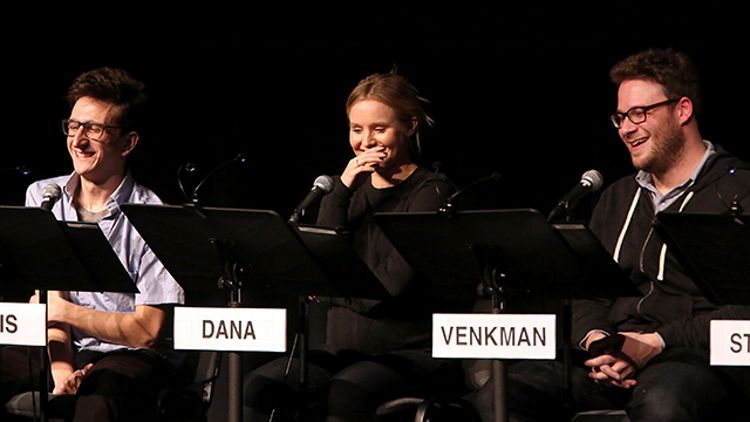 When I got to the Los Angeles County Museum of Art last night just minutes before showtime, the theater was nearly full. Every unoccupied seat was marked with a bag or coat, and for a few minutes, I thought I’d being spending my evening propped against the back wall. The crowd was here for the final installment in a series of immensely popular live reads organized by director Jason Reitman, of Up in the Air and Juno fame, and tonight’s film of choice was Ghostbusters, which just so happened to be directed by Reitman’s father, Ivan, so the fact that I thought I’d just roll in and plop down was probably my own fault. Eventually, though, I found a seat in the back row, and the lights went down, and everything was fine.

After a brief introduction, Reitman was the first one onstage, and the jokes about not fucking up his inheritance began. “Everyone wanted to be a Ghostbuster for Halloween,” he said. “But I was the only one with a real Ghostbusters gun.”

I’d heard a few things about some of the bigger names who might be involved, but the rest of the night’s cast was a mystery until Reitman introduced them: Paul Scheer as the mayor, Paul Rust as Louis, Kevin Pollak as Walter Peck, Mae Whitman as Janine, Kristen Bell as Dana, and Phil LaMarr as Winston. Playing the three Ghostbusters were Jack Black (Ray), series regular Rainn Wilson (Egon), and with the night’s toughest task, Seth Rogen as Bill Murray’s Peter Venkman. Reitman noted that although they were using the original script, last edited in October 1983, he had to add a majority of Murray’s dialogue, which had been largely improvised.

It was clear early on that the trio had been well cast. Wilson is no stranger to humorless characters and had no trouble capturing Harold Ramis’s down-the-middle Spengler, and with a quality uniquely his, Black kept up with Dan Aykroyd’s words-per-minute rate just fine. From the first scene, Rogen, like Murray, was able to make Venkman charming in his apathy.

Because I’ve watched 20 episodes of Parenthood in the past week, I’ll admit I’m biased, but Whitman was excellent as the fast-talking Janine, and hearing Bell bellow, “There is no Dana, only Zuul” was enough to make the trip worth it. It was Pollak, though, who stole the show, adding Larry King and Casey Kasem impressions to a perfectly pencil-necked and dickless Walter Peck.

The best part of the night was in the shared anticipation both the audience and the cast had for certain lines. The lead-up to “Ray, when someone asks if you’re a god …” and Rogen’s giddiness at “Cats and dogs, living together, mass hysteria!” were what make events like these special — here, everyone is a fan.

After Ecto-1 finished its final drive through Manhattan, Reitman listed off the names once more, but it was his father who got a standing ovation, and I’d have to guess he didn’t think things were fucked up too badly.

Video On Demand Report: Get a Crisis Suite and Have Yourself a Bourne Marathon