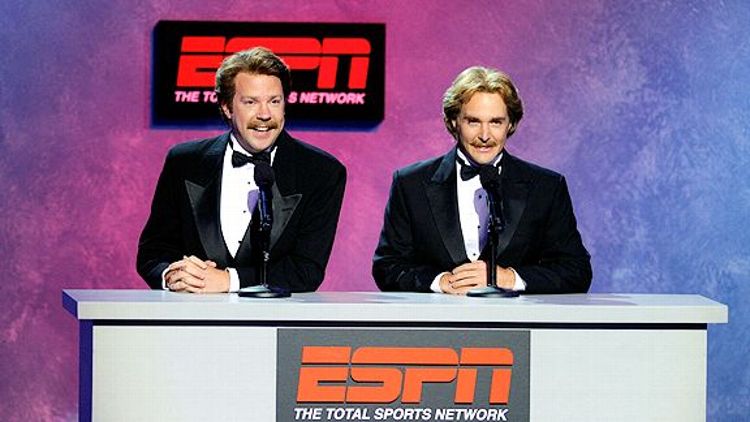 Jason Sudeikis has joined Dog Fight, the Jay Roach-directed comedy starring Will Ferrell and Zach Galifianakis as rival candidates in a small South Carolina congressional district. This continues a string of big comedies for Sudeikis, who was originally hired as a writer only on Saturday Night Live before breaking out as a performer. Just goes to show you, professional writers: You, too, could have had a rich life of public fulfillment, if only you were are as handsome as Jason Sudeikis. Grade: B [HR]

Matt Damon and Ben Affleck are teaming up on a Whitey Bulger movie with Warner Bros. Affleck will direct, Damon will star, and Boardwalk Empire’s Terence Winter will write the screenplay. Damon, who already starred in the Bulger-inspired The Departed, says he doesn’t yet know if it’ll be a “straight biopic” or something less traditional. “But one thing’s for sure,” Damon did not add, “me and Affleck united? It’s gon’ be like 1997 up in this bitch.” Grade: A [GQ]

John Cusack will star in the action thriller The Numbers Station, playing a disgraced black-ops agent demoted to protecting a code operator (played by Malin Akerman) at a covert CIA broadcast station. Sorry, at what point does something crazy and exciting happen? Grade: C [Showblitz]

Will Sasso (MADtv, Three Stooges) has sold the comedy All-Americans to Fox. It revolves around an Army Ranger, back in the States after ten years in the Middle East, shocked to learn that his brother has become a “liberal, skinny jeans–wearing, anti-establishment, street artist who lives in a hipster neighborhood.” First 2 Broke Girls, now this? Congrats, hipsters, you are now nationally well known enough to be the object of scorn on multiple broad network sitcoms. Grade: D [HR]

NBC has given a pilot commitment to single-camera White House family comedy 1600 Penn, which comes from a strange and powerful trio of creators: Book of Mormon star Josh Gad, ex-Obama speechwriter Jon Lovett, and Modern Family director Jason Winer. And somewhere, Obama is thinking, “Goddamn you, Lovett, you better not write in that time Wen Jiabao was on a state visit and I spilled gravy all over my pants.” Grade: A [HR]

Lily Collins has landed a role in The English Teacher, which stars Julianne Moore as a repressed English teacher who convinces her former star student, a failed playwright, to put on his latest play at the high school, which leads to all manners of drama. Collins plays a popular current student. Is Lily’s fame now past the point where it’s necessary to mention she is the progeny of Phil Collins? Nah, not yet. Grade: B [Deadline]

Melanie Griffith is in talks to star in the Lifetime show American Housewife, which she would also co-produce with her dude Antonio Banderas. She’d play “a mother of two children who has conversations with her inner voice while dealing with one of her kids leaving home for college.” Lifetime isn’t really known for original series, but first Army Wives, now this? Watch your back, AMC. Grade: C [Deadline]