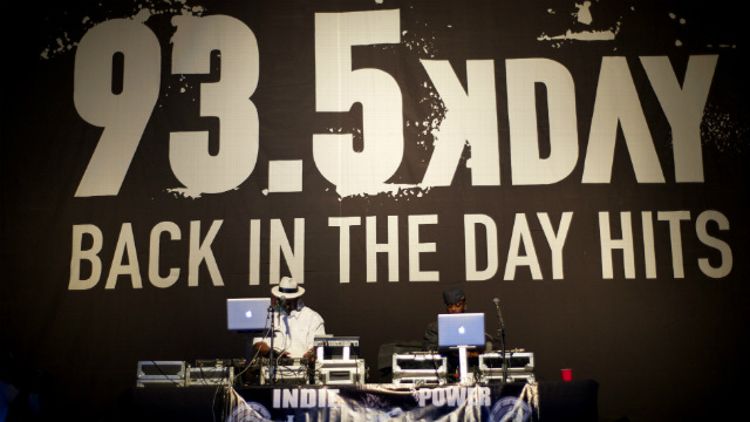 When I moved with my family from Brooklyn to Los Angeles a year ago, it wasn’t just so I could drive around listening to KDAY. At least on its own, that would have been an irresponsible reason to move. The move was about a lot of things — work, living space, climate, family, festering bad blood back East, an ongoing fixation with The Long Goodbye (Raymond Chandler’s, but also Robert Altman’s), and Michael Mann establishing shots. And yes, OK, I was also somewhat enticed by the fact that L.A. had a radio station that played nothing but classic hip-hop, which meant you stood a good chance of hearing “Thuggish Ruggish Bone” or “Sprinkle Me” or “Cherchez La Ghost” just playing on the damn radio in the middle of the afternoon in 2013, on a 70-degree day in February during which you could, if you so desired, drive to a store and legally buy a weed-laced chocolate bar to eat later in the Cinerama Dome. “The true New Yorker,” def poet John Updike once wrote, “secretly believes that people living anywhere else have to be, in some sense, kidding.” But after a while, having visited Los Angeles and tasted these advantages, staying in New York started to seem like it was, in some sense, for saps.

It was reported yesterday that KDAY’s parent company, the Panama City, Florida–based Magic Broadcasting, has agreed to sell KDAY and its Ontario/Riverside sister station KDEY to RBC Communications for around $20 million, and that if the deal goes through, the new owners are likely to switch the stations to an all-Mandarin-language format. With all due respect to Los Angeles’s Mandarin-speaking community, who are as deserving of a radio format tailored to suit their needs as anyone else, this is the worst thing that has ever happened. In the age of iPods and podcasts and Spotify and Pandora, there’s no longer any reason to complain about the badness of commercial radio, but a good radio station is something to celebrate, and KDAY (which lifted its call letters, and a good bit of its sensibility, from the first L.A. station to play a lot of rap in the ’80s) was a radio station so good it actually made me choose the radio over the infinite celestial-jukebox options in my phone. It wasn’t perfect — while the weekend mix shows were staggeringly eclectic, on weekdays it was a little too early-2000s-centric and a little too West Coast–centric and spent a little too much airtime perpetuating the myth that Xzibit and the Game are major artists who’d crafted timeless jams worth revisiting. And apparently its mix of music appealed mostly to men between 18 and 34, a notoriously undesirable radio demographic for advertisers, which goes a long way toward explaining why no commercial break ever went by without a DJ reading copy urging you to get a payday loan or retain the services of a Saul Goodmanesque attorney or buy rims on credit. These are not the type of sponsors that keep a radio station afloat, even a great one.

But man, when it was great, it was great. It was a time machine and an 808-powered Proustian-flashback generator and (despite the absence of personality jocks worth writing home about) an oddly homemade-feeling outlet with its own eccentric and occasionally inscrutable canon. I’m assuming that its non-mix-show playlists were chosen by a computer, but I’m also convinced that said computer was a laptop with about 400 songs on it stolen out of someone’s Ford Taurus in 2003. KDAY seemed to play both Westside Connection’s “Bow Down” and Brit-R&B singer Mark Morrison’s “Return of the Mack” at least once every hour, two great songs that sound completely nonsensical together. I once heard Mobb Deep’s “Shook Ones Pt. II” around 10 a.m. on a Wednesday morning, which is a time when no decent person wants to listen to Mobb Deep, which did not in any way stop me from listening to Mobb Deep. When I first moved here I didn’t have a driver’s license, which meant I spent a lot of time in the passenger seat of my wife’s car, wondering what KDAY was going to play next and noting down future additions to the Stuff That Sounded Amazing on KDAY playlist on my computer back home. April-July 2012 selections: The D.O.C.’s “The Formula,” Too $hort’s “Blow the Whistle,” Lil’ Troy’s “Wanna Be a Baller,” Queen Pen’s “Party Ain’t a Party,” Mack 10’s “Backyard Boogie,” 2 Live Crew’s “Get It Girl,” and the remix of SWV’s “Anything” with Ol’ Dirty Bastard, Method Man, and U-God on it. There is no through line to that list except “rap music” and “amazingness”; KDAY was the rare example of hip-hop nostalgia without an agenda. Queen Pen is not “important.” Neither were Delinquent Habits. But when “Tres Delinquentes” came on the other night as I wove through traffic headed west on Sunset, toward the actual sunset, I would have argued the point. That Herb Alpert sample was inspired.

KDAY is the reason my almost-3-year-old daughter has a favorite Ludacris song and the reason that song is the radio edit of “Move Bitch”; I choose to believe that when Jake Gyllenhaal and Anna Kendrick sing along with Cam’Ron’s “Hey Ma” in the car in End of Watch (the most romantic movie scene of the decade, c’mon), it’s because they are supposed to be listening to KDAY, too. I am bereft about the end of this era and will sign any petition put in front of me if it means the chance of a reprieve. On the other hand, part of the thrill of falling in love with a radio station is knowing you could lose it. Today’s KDAY is just one of the things 93.5 FM has been since it signed on in the early ’60s, along with pop, country, Persian, Armenian, and Spanish-language. Getting attached to radio formats is for saps, too. And there’s also something poetically right and resonant about the idea of KDAY’s all-nostalgia format becoming itself the subject of nostalgia. So farewell in advance, KDAY. You made me remember a lot of things, and I look forward to remembering you, too.