How We’d Fix It: A Humble Suggestion for the Rock’s Next Career Move 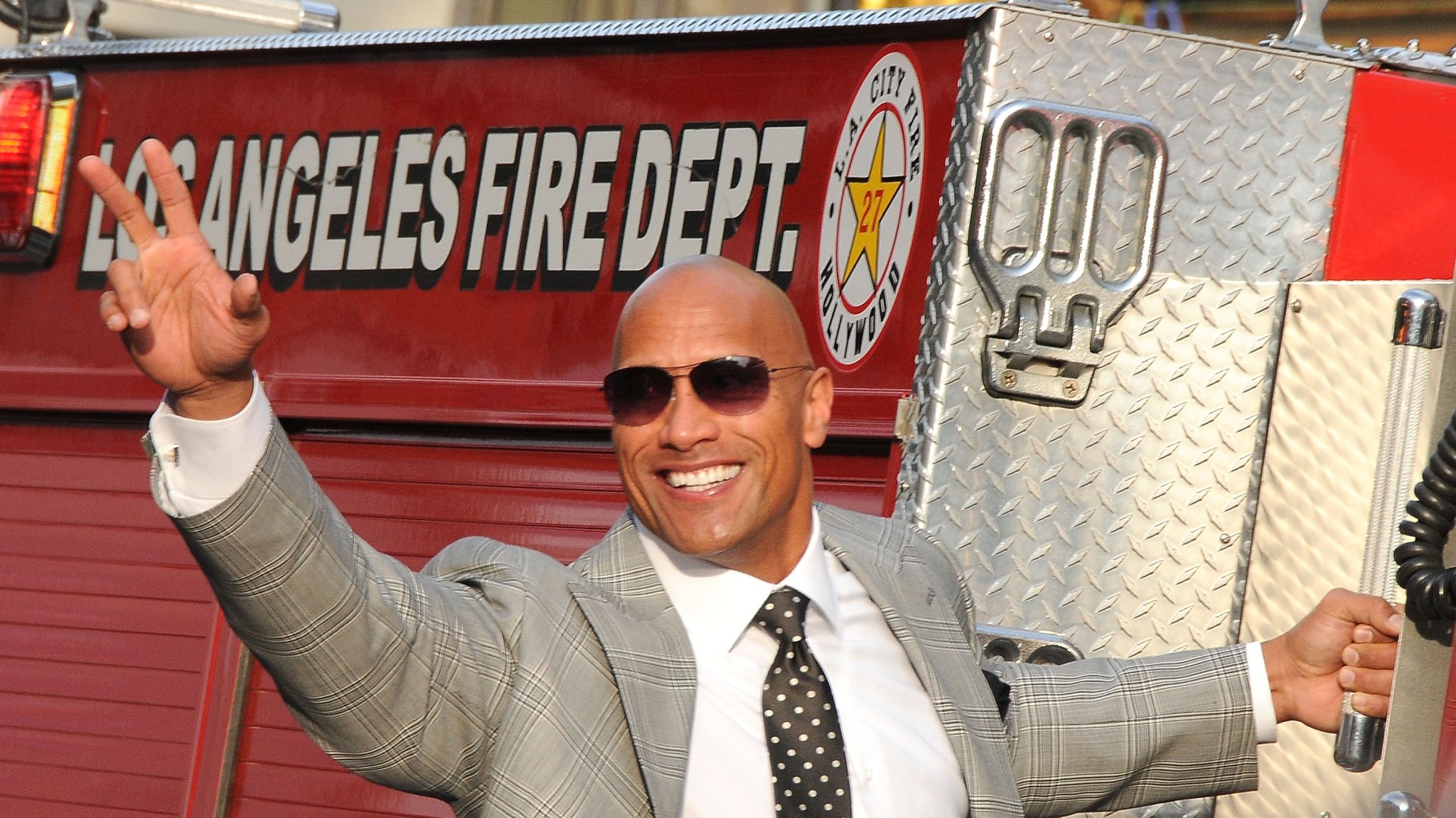 Imagine that you are Dwayne Johnson.

You can’t, can you? Pretending you’re Dwayne Johnson is like pretending you have eight arms, the ability to bend spoons with your mind, and a set of gills like Kevin Costner in Waterworld — it’s ridiculous. You can never even hope to be the Rock, because, well, look at him. He’s made of granite, has a perfect smile, and is possessed of more charisma than the hypothetical love child of Bill Murray and Charo. He’s an integral part of the massively successful Fast & Furious franchise, just headlined the hit disaster movie San Andreas, and stars in a new HBO comedy series called Ballers that semi-successfully gene-splices Entourage with Arli$$.1 So, why would I even dare to suggest a way to improve Johnson’s career? Who the hell am I to presume I know better than the People’s Champion? Should he come to my house and pummel me for thinking his career choices are flawed?

I say these things only out of pure admiration for a man whose accomplishments greatly outstrip my own. Dwayne Johnson is one of the most talented action stars in Hollywood. And yet, most of his potential remains untapped. San Andreas was a much-needed solo financial success, but a large percentage of his filmography is littered with the kind of forgettable junk that even drunk college kids won’t watch at 2 a.m. After The Scorpion King and The Rundown, we were ready to anoint Johnson as the next Schwarzenegger. Instead of claiming that throne, he pulled a Daenerys Targaryen and decided to park it in the movie-business version of a Meereenese quagmire: kids’ movies. Tooth Fairy, Race to Witch Mountain, and Journey 2: The Mysterious Island2 stole prime years of his career from us, and for what? Arnold didn’t start doing family films until he’d already given us Commando, The Running Man, Total Recall, two Terminator films, Predator, two Conan films, AND Planet Hollywood — the finest novelty eating establishment since Dino’s Lodge.

Even though his trajectory is finally pointed firmly up, his next movie is … a remake of Big Trouble in Little China? This development was so unpopular that he’s already started doing damage control. The last time Johnson starred in a remake of a beloved cult classic, it became the abomination known as Walking Tall. Also, I should point out that the lead character of Big Trouble in Little China, Jack Burton, is meant to be a doofus. This is a fundamental misunderstanding of why we love Johnson. After almost 15 years in Hollywood, the closest he’s come to a signature role is Hobbs in the Fast & Furious movies. He was in Furious 7 for about 10 minutes, but that limited time was pure action-movie bliss. Hobbs puts all the elements together for Johnson, and until we get the spinoff we deserve, we shouldn’t have to sit through another movie in which he plays a guilty absentee father, a broke ex-athlete, a bumbling truck driver, or a tooth fairy. He can do all of that stuff if he wants to, but at least give us a few slabs of red meat too.

For the sake of the entire planet, let me explain clearly what we love about Dwayne Johnson:

The first thing you notice about Ballers is that Johnson is very large. None of the football players on the show look like actual football players. Granted, neither does Dwayne Johnson. He looks like he ate an entire football team.3 Kinda hard to believe a guy is down on his luck when he looks like he could rip the door off a bank vault.

2. He Is Confident Without Seeming Sleazy

Kurt Russell was memorable as Jack Burton because he subverted the audience’s expectation that he would be a highly competent hero, that his bluster would be backed up with an expert set of skills. Burton looked and acted like a guy who’d seen way too many action movies but had never been in an action movie. Unless Johnson loses 50 pounds of muscle and throws a mullet wig on his bald head, I’m not going to buy him as vulnerable or humorously out of his element. The Burton of the original Big Trouble was the sort of low-rent huckster who exhausts everyone he meets with his unearned bravado. At some point, you stop believing what he says in that film. At no point do I ever doubt Johnson. I’m not an idiot. If he says he can pilot a submarine by himself, turn cheeseburgers into flat-screen TVs, or train dolphins to be assassins, I believe him. Again, I am not an idiot.

3. He Can Deliver a Winking One-Liner Better Than Anyone

What the hell is “thunderwear”? Does it matter? I believe it’s a thing because Johnson says it’s a thing. He has a special, undefinable way of leaning into the absurdity of a script without piercing the illusion completely. Whereas Fast-mate Vin Diesel’s extreme sincerity defines his best work, Johnson delivers his lines with just enough of a wink to keep the proceedings from turning overly grim.

These are the skills that define the pantheon of action stars: Arnold, Sly, Bruce, and Harrison. So why does Johnson persist in being the best part of a terrible movie or, at best, second fiddle to Diesel? This is the question I wish I could answer, but I do have a solution to this problem.

There’s really only one filmmaker who can get the most out of this beautiful treasure of a man:

Maybe you can’t imagine being Johnson, but you certainly can imagine hearing him speak Black’s hyper-literate tough-guy dialogue. You can envision him taking down a phalanx of Euro-trash drug dealers during a particularly bloody Christmas season. I don’t mean a remake of Lethal Weapon, either. I’m saying let Black write something original just for him. Johnson is the best ’80s-style action hero since the ’80s ended, so why not team him up with the best ’80s-style action screenwriter? Black has a track record of delivering films that play to the strengths of ultra-charismatic actors like Robert Downey Jr. and Mel Gibson. Lethal Weapon perfectly captured the manic energy and unpredictable qualities of Gibson’s screen persona. Kiss Kiss Bang Bang reintroduced moviegoers to RDJ’s fast-talking, brainy rakishness. Black writes dialogue that favors clever actors, he excels in the kind of absurd set pieces that only someone like Johnson can make credible, and he writes stories in which hubris and confidence are rewarded. His record is not spotless, but the successes he’s had prove his ability as an action auteur who can absolutely get the most out of an actor like Johnson and someone who can write an original screenplay that only Johnson can lead.

Whatever Dwayne Johnson does post–San Andreas will dictate whether he can fully break through to the next level of success that has thus far eluded him. So, I implore him to make the kind of movie we’ve been begging him to make for almost two decades. I realize that asking the Rock to do anything is like praying for rain or waiting to get abducted by aliens in a cornfield, but it’s worth a shot.

We Went There: Drake Exorcises His Festival Demons at New York’s Governors Ball