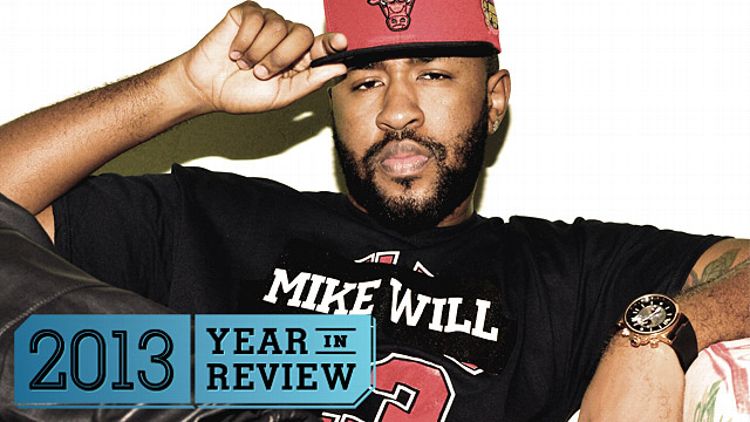 Here’s an understatement: Mike Will Made It had himself quite a 2013. The 24-year-old Atlanta producer has been steady climbing for a couple years now, attaching his eponymous, otherworldly drop — see here, far right, middle row — to an impeccable string of heaters, from Meek Mill’s “Tupac Back” to Future’s “Turn on the Lights” to Juicy J’s “Bandz a Make Her Dance.” With even Kanye West tapping a sword on the young man’s shoulder when he brought him in to coproduce “Mercy,” there was no doubting his ascendance would continue apace. And then “We Can’t Stop” came along, and the timeline got blown to smithereens. Herewith, Mike Will in his own words breaks down his start, his rise, and how the Year of Miley allowed him to go ahead and toss “super” in front of “producer” on the ol’ business card.

I used to grind. I be telling people, you don’t grind, you don’t sell. I was like 15, 16 getting dropped off in the city by myself, with my own beat CDs. I had met Gucci [Mane] at this studio, Patchwerk. 2005 or some shit. I ain’t even know he was gonna be there. And I had gave him some beats to let him hear, and he just went in the lounge and started freestyling on all my beats and shit. Next thing you know, he saw me again: “Yo, you buddy with the beats, right? Let me buy that beat from you, man.” I got a band. [Editor’s note: A “band” as in the thing that makes her dance.]

“Tupac Back” was the first single I had, but prior to that I already had 20-something songs in the street. I already had mixtapes with Gucci. But “Tupac Back” showed people, He don’t just do mixtapes, he can actually do a single. ’Cause this shit is a fucking banger. It really came in and shook the game up. It had everybody freestyling on it — to freestyle on the “Tupac Back” beat was the thing to do. I was just very consistent after that.

At the end of 2011, Jeezy told me, “Man, you got the beats, you got the talent, but all I’mma tell you is spread that sound out. Don’t put yourself in a box. They been a couple young producers that came in the game and they didn’t do that.” When Jeezy told me that, he said, “People like Kanye, people like Lil Wayne, people like Jay Z gonna wanna work with you, too.”

So I kept doing my thing and around March [2012], two days after my birthday, I was in Louisiana with Ludacris, and I got a call [from Kanye West’s people] wanting to fly me to New York. Kanye is one of my favorite producers and artists. I thought he wouldn’t know who I was, but I got up there, and man, he tells me, “There’s times where there’s a game-changing beat or a game-changing song, someone comes through with the crazy kicks, with the crazy sounds, changing the game to where everybody wants to be like that producer. And right now you that guy. You have what it takes to really take over the game.” It was crazy. He let me hear “Mercy” with no drums. He said, “I wanna go straight to the source. I just felt like, if you come through, you put yo fuckin’ drums on there.” I just did it like that, and in no time “Mercy” came out and took over.

“We Can’t Stop” was [originally] for Rihanna, but she never heard it. I wasn’t in the studio with Rihanna but I had run into Chris Brown and I was letting him hear the stuff I was working on for Rihanna. He heard “Pour It Up” and went crazy. He said to her, “Mike Will got this crazy joint over here for you!” “We Can’t Stop” was really the first song I wanted Rihanna to hear, but it wasn’t all the way laid down yet, and “Pour It Up” was. She heard “Pour It Up,” she got locked on it, and she knocked it out.

The “We Can’t Stop” beat was so pop, I always said, “Man, this shit remind me of a mature version of ‘Party in the USA.’” And then somebody had asked me, “Why don’t you give it to Miley then?” I said, “Man, that’s a good fuckin’ question.” I ain’t run into Miley yet but she hadn’t put out music in a minute. I wondered, What she doing right now? She probably won’t even fuck wit’ me; she probably got too much politics to get to her. At the time, I ain’t know where each artist was signed. I was just doing music.

So I had a meeting with RCA and [CEO] Peter Edge, letting him hear a whole bunch of different songs. And he heard “We Can’t Stop,” and he was just like, “That record might work for Miley Cyrus.” Her A&R liked it too. He took it to [Miley] and let her hear it, and she said she instantly connected with it because it reminded her of parties that she had been to.

Really, that song, it’s written from the perspective of someone that’s in a wild party — it’s never her saying she was in the bathroom doing lines. And really it was from the [N.E.R.D. song “Everyone Nose”] — “All the girls standing in line for the bathroom!”

It just worked for her. So when she heard it, we went in the studio, she laid it down, and that same day, we did [Mike Will’s debut single] “23.” She had never rapped before. I was fucking with her lyrics, keeping her in the pocket, and that ended up dope. She listens to a lot of rap music, and she takes good direction. If I’m like, “You should re-say it like this” or “Use this tone of voice,” she’ll try it a couple of times and knock it out. I ain’t know what kind of chick she was, but she was down to try new things. But it was too early. I ain’t want that to be the first [new] thing from Miley.

The vocals [on the original reference track] were by Rock City, a songwriting group that I work with. The beat was slow, it was real piano-ish. I told them, “If you can make a party record out of this, we out of here.” And then when [Miley] had did it, we had worked on it a couple times. The first version doesn’t sound like the version that actually came out: Rock City, they from the [Virgin] Islands, so the first version had more of an island melody. Miley’s version, we told her to keep her country twang tone instead of trying to sound like the reference, and it came out dope.

On the second session we had, I saw her coming up the street, and a whole line of cars, just people swerving and shit. I was like, “Who the fuck are these people?” And then next thing you know, she turns into the garage, and these dudes, these grown-ass men, is tripping over each other. That was the first time for me seeing the paparazzi like that.

Her album was pretty much done when we first got into the studio, but we just kept working, making dope records. I told the label, “You should let us keep going till we hit a dud. We need to keep going until we hit a brick wall.” And we never hit a brick wall. Me and her now, we still talk on the phone every day, we still constantly working on music and giving each other different ideas.

I look at her like a friend. She my homey, I love her for life. So I look at it like she was already a huge celebrity, and she already had an idea of what she wanted to do, as far as dancing and twerking and shit like that. But at the same time, I told her, man, look, you already a huge celebrity, grown-ass men chasin’ you trying to take a picture … but if you come out with music that’s dope as shit then can’t nobody tell you nothing. I always had those talks with her. I always told her, “You gotta be just the illest.”

Everything that we planned on, how we wanted to roll up big, everything that we foresaw in January and February ended up being just like that. Being on the cover of Rolling Stone — damn, she a rock star! She really is one of those people that doesn’t give a fuck, but at the same time she’s real smart. Smart as a motherfucker.

You see a girl that’s coming from Nashville, Tennessee, that’s a big pop artist and she can strictly carry it all the way with the white people. But she’s embracing the hip-hop community, and she’s embracing the urban culture with open arms, and what they wanna do is call that racism. She isn’t crip walkin’. She not making fun of ’em — she embracing it. All kind of girls dance and twerk. Matter of fact, go to the strip club, you see Spanish girls, white girls … She went to New Orleans, they do bounce music down there, they do a lot of twerking, and that’s when she started twerking.

A lot of the time, people who write that stuff are racist themselves. They don’t wanna see white doing black. “That just doesn’t look right, she’s fuckin’ with this urban producer but really he came through with different sounds on her album, she’s on his first single, they hang out all the time, and then she dancing like this and quoting different hip-hop lyrics on her Twitter … ” They don’t wanna see that shit. I don’t even generally understand how you can say someone that’s embracing the urban culture is racist. I never got that.

But you either out there — a “not giving a fuck”–type person — or you a person that’s going with the guidelines. And it’s not really a black or white thing. If Miley was doing all the way pop shit, they would have found something else about her [to get mad about].

I told every label that I had a sound that was gonna change the game. Put me in the studio with any artist that they want and we can take over the game. I’m just trying to stay consistent. I’m working on my own album. “23” is about to go platinum, and it got over 100 million views on VEVO. I been working on different designs for clothes and shit. People already loving the “23” hoodies. Jordan Brand even reached out to me to say they liked the shit. Michael Jordan reached out to me to say he liked the “23” song.

I even scored the LeBron commercial. I came with the whole song and everything and got John Legend to sing on it.

I don’t sleep. I’m drinking fruit juice, keeping all my nutrients, taking vitamins and shit. Making sure I got my energy up. Just exercising, juicing and shit, and just trying to keep my energy up because I know I can’t sleep. I’m trying to balance so much. I just had a show in Atlanta, I brought out Jeezy, T.I., 2 Chainz. I ain’t even promote they was gonna come and it ended up being sold out. I’m just trying to get my following right, get it all the way together. Yesterday, I slept the whole day. I got that one day where you sleep the whole entire day. Then you get back on the grind.

This interview has been condensed and edited.